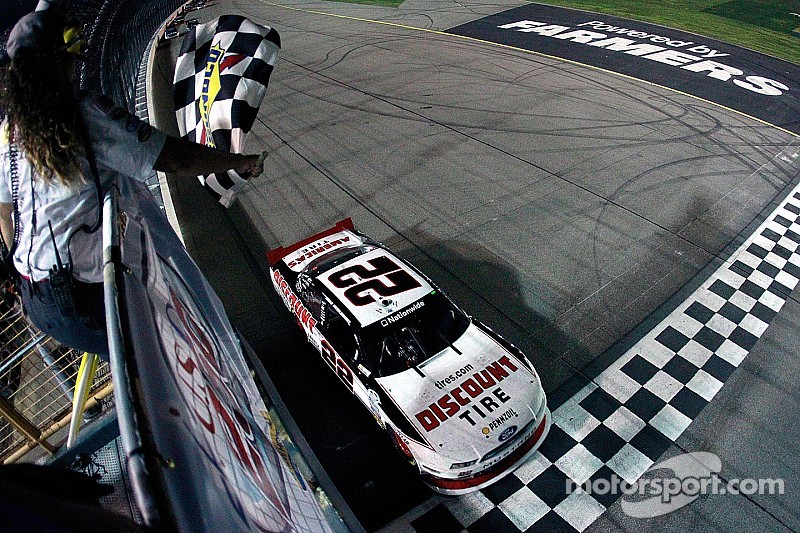 Brad Keselowski spoiled the party for the Nationwide regulars in Iowa tonight, claiming his third win of the year.

The No. 22 Team Penske Ford of Brad Keselowski and the No. 54 Joe Gibbs Racing Toyota of Sam Hornish Jr. dominated throughout the US Cellular 250 NASCAR Nationwide Series race at Iowa Speedway Saturday night, combining to lead all but 39 laps of the 250-lap race.

Keselowski was the most dominant, leading 146 laps on his way to his third-career win at Iowa Speedway. It's also the 30th win of his career. Hornish wound up fourth after opting for four tires on the final pit stop.

Maybe we would've done it with two...

"Great night for the Discount Tire Mustang. When Brad makes his trek across the country, the only mission is to win," crew chief Jeremy Bullins said, noting Keselowski's travel between Pocono Raceway and Iowa Speedway.

The No. 20 Joe Gibbs Racing Toyota of Michael McDowell finished second and the No. 6 Roush Fenway Racing Ford of Trevor Bayne was third. With the third-place finish, Bayne claimed the final $100,000 Nationwide Dash 4 Cash bonus of 2014.

"It's really cool for our team," Bayne said of winning the bonus. "This weekend we had speed. Sometimes we don't know where it comes from. Some weeks we have speed; some weeks we don't."

The yellow flag waved for the final time with eight laps remaining when James Buescher crashed on the front stretch. With a set of tires left on pit road, all lead lap cars pitted, but several only took two tires, Hornish went from second to seventh on pit road when his JGR team opted to put on four.

"It was the chance that we had to go out and win," Hornish said. "Maybe we would've done it with two."

Keselowski retained his lead through the caution period. McDowell restarted second as one of the drivers who took two tires and he nearly won the race after clearing Brad on the initial restart.

"Our Pizza Ranch Camry was really strong," McDowell said. "Took two tires on that stop there at the end, and the Pizza Ranch crew had a great stop."

McDowell took the lead from Keselowski on the restart, but Keselowski got back up front before the lap was completed and remained up front for the remaining two laps.

Bayne started on the pole and led the first 31 laps before Keselowski took over up front on lap 32. He lost that lead to the No. 11 Joe Gibbs Racing Toyota of Elliott Sadler when Sadler, who pitted during the first caution that came out on lap 26, stayed out during the second yellow flag on lap 51.

Hornish took the lead from Sadler on lap 61, only to lose the top spot to Keselowski a few laps later. Keselowski and Hornish then ran one-two until the final yellow flag. Hornish got off pit road first to take the lead from Keselowski during a lap 108 caution and held the position until Keselowski retook it on lap 164.

By finishing higher than his JR Motorsports teammate, Smith was able to close to within two points of Elliott and the championship points lead.

It's double duty for Ambrose this weekend at Watkins Glen