Kevin Harvick cruises to the win in Atlanta Xfinity race 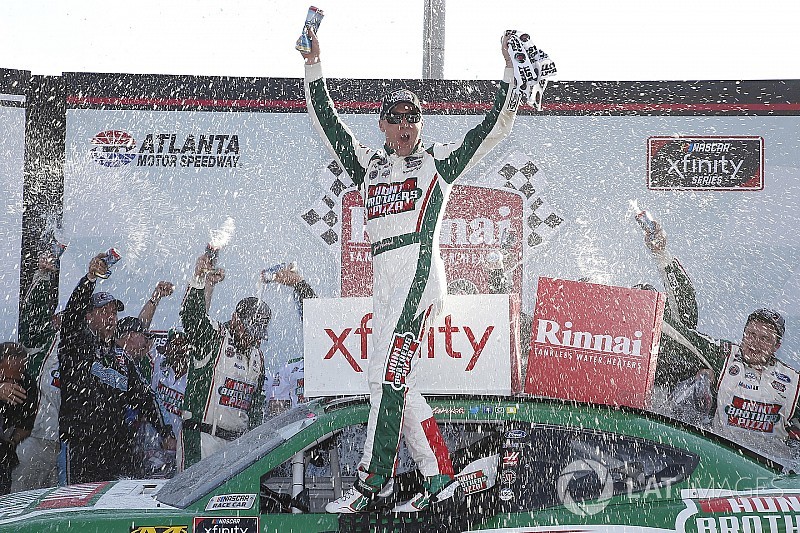 Harvick led 137 of 163 laps for his fifth Xfinity Series win at the 1.5-mile track and his 47th victory in the series.

“Good job fellows, thank you,” Harvick said as he beat Joey Logano to the line by 4.183-seconds in the No. 98 Hunt Brothers Pizza Ford. "(Atlanta has) just been a really good place for me, obviously getting my first Cup win here. We’ve run good cars throughout the years, and the race track has stayed very similar to what it’s been for a number of years. And I think, as you look at the techniques and the things that I do in the car—and they give me what I want in the car, as far as the feel—it just applies here."

Christopher Bell hung on for third followed by John Hunter Nemechek, who was making his Xfinity Series debut.

“Thank you guys,” Nemechek told the No. 42 Ganassi Racing crew. “Appreciate all the hard work. Can’t wait until the next time.”

Harvick controlled the Lap 88 restart with Logano alongside. Nemechek, who restarted 11th, moved into the top 10 on the restart and to eighth two laps later. He was sixth after Lap 92. By Lap 95, Harvick had a one-second lead over Logano. Bell, Sadler, Reddick, Nemechek, Allgaier, Dillon, Cindric and Hemric completed the top 10.

Harvick cycled back into the lead on Lap 130 followed by Bell, Logano, Sadler, Nemechek, Reddick, Allgaier, Cindric, Benjamin and Truex.

Reddick was running seventh when he reported on Lap 135 he might have a right-rear tire going down. On Lap 138, he limped the No. 9 Chevrolet down pit road. Reddick dropped to 22nd, two laps down. Nemechek took the low lane under Sadler for fourth-place on Lap 142.

With 20 laps remaining, Harvick’s lead was nearly two-seconds over Bell. Logano, Nemechek and Sadler rounded out the top five.

On Lap 157, Bell grazed the wall in Turn 2 allowing Logano to pass for second and Harvick to extend his lead to 3.6-seconds. Nemechek held fourth with Sadler running fifth.

“I just got really loose there on the last run,” Bell said.

Harvick offered props to his crew following the race.

“The good thing is they’ve had a lot of reps," Harvick said. "We’ve had Clash reps, reps in the qualifying race, the Daytona 500, and they pitted on Saturday last week. They pitted on Saturday this week, and they’re just doing a really good job. Those guys are pretty athletic, and they practice hard and have done a great job over the last couple years of getting this car off pit road. As long as I don’t screw it up going to fast, they do really good making the pit stops.”

Truex, Benjamin, Nemechek, Briscoe, Spencer Gallagher, Tifft, Chastain and Grala were the only cars remaining on the lead lap. Alex Labbe was the beneficiary.

Logano moved up to third by Lap 55. Reed dropped to fourth followed by Sadler, Reddick, Truex, Allgaier, Dillon and Hemric. Harvick extended his lead over Bell by a second and a half. Sadler passed Reed for fourth on Lap 60. Two laps later, Nemechek returned to the top 15 after dropping to 34th, one lap down in the first stage after his tire shredded.

Harvick’s lead was 2.1-seconds by Lap 65. Bell, Logano, Sadler, Reddick, Reed, Allgaier, Dillon, Truex and Hemric rounded out the top 10. With 10 laps remaining in the stage, Harvick’s lead was nearly two-and-a-half seconds. Five laps later, Harvick held a 3.3-second lead over Bell and Logano was nine-seconds behind the leader.

Harvick brought the leaders down pit road on Lap 83. He was the first driver to complete service. Logano was second followed by Bell, Sadler, Reddick, Allgaier

Bell led the field to green. Spencer Gallagher and Ryan Sieg started from the rear of the field. Gallagher’s No. 23 Chevrolet had unapproved adjustments. Sieg’s No. 39 Chevy needed a tire change.

Joey Logano went around the outside of Bell out of Turn 2 for the lead on the first lap. Alex Labbe came from 33rd to 23rd in the first two laps. Bell moved back to the point through Turns 3 and 4 working Lap 5. Nemechek returned to third on Lap 6 but then Harvick nudged him out of the way for third and brought his teammate Cole Custer with him. Kyle Benjamin joined the run and Nemechek dropped to sixth.

On Lap 10, Elliott Sadler got the No. 42 Chevy loose and as Nemechek collected the car back up, he made contact with Custer, who went into the spin cycle on the front stretch for the first caution.

“The 42 was pretty loose, I got underneath him and he got sideways,” Custer said.

The race returned to green on Lap 16. Harvick took Bell and Logano three-wide through Turns 1 and 2 for the lead with the No. 22 Ford in tow. Bell fell to third followed by Reddick, and Benjamin. After 18 laps, Sadler ran sixth followed by Nemechek, Hemric, Reed and Truex.

Sadler moved up to fourth by Lap 20. By Lap 25, Harvick’s lead was 1.535-seconds over Bell. Logano, Sadler and Hemric rounded out the top five. Reddick passed Hemric for fifth on the next lap. Nemechek followed for sixth.

After 30 laps, Harvick had extended his advantage by two-seconds over Logano. Bell, Sadler and Nemechek completed the top five. Nemechek pitted on Lap 33 with a shredded tire. He dropped to 34th, one lap down. Michael Annett followed on the next lap with a similar issue. He fell to 36th.

The second caution came out on Lap 35 due to a piece of tire inner liner on the track between Turns 1 and 2. Harvick led followed by Logano, Bell, Sadler, Hemric, Reddick, Truex, Reed Benjamin and Dillon.

Harvick led the field down pit road but Logano, Dillon, Cindric, Chastain, Yelley, Briscoe, Williams, Gase and Starr stayed out. Harvick was the first off of pit road followed by Benjamin, Sadler, Bell, Hemric and Reed.

When the race returned to green with one lap remaining in the stage, Harvick came from 10th to first to win the segment. Nemechek was the lucky dog.

Tommy Joe Martins was penalized for pitting in the wrong pit box. Nemechek pitted on Lap 44 and dropped to 32nd.

Five things to watch for in the Atlanta Xfinity Series race