"We put in a hard-fought year - everyone on this No. 77 team did the best they could all year long"

After spinning while running 10th with just over 50 laps remaining in the NASCAR Nationwide Series finale at Homestead-Miami (Fla.) Speedway, Parker Kligerman rallied back to score a seventh-place finish. With his 13th top-10 finish of the season, the Connecticut native moved up one spot to ninth in the final Nationwide Series championship standings in his first full-time campaign. 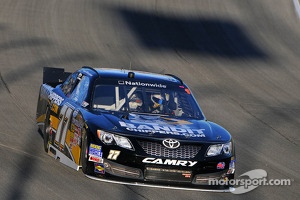 "We were hoping to be able to get by the 32 (Kyle Larson) for eighth in points -- we had a Camry that was capable of that, I just got into the wall a couple times and weren't able to get up there," Kligerman said. "Have to thank everyone involved this season - Toyota, Bandit Chippers, North American Power, Bolle, Bell Helmets, Nationwide Insurance, Kyle, Samantha and everyone at Kyle Busch Motorsports for this huge opportunity. We put in a hard-fought year - everyone on this No. 77 team did the best they could all year long. It definitely wasn't for a lack of effort that we weren't able get up to eighth in points."

Kligerman started from the 16th position and despite battling a Camry that was "a little loose," maneuvered his way up to the eighth spot during the first green-flag run that lasted 48 laps. After a debris caution slowed the field for the first time, the No. 77 Camry visited pit road for four fresh tires, a full tank of fuel and a minor wedge adjustment.

The talented 23-year-old took the ensuing restart from the 10th spot and remained inside the top 10 over the course of three more cautions. He was summoned to pit road under caution on lap 99, where the over-the-wall crew administered a four-tire and fuel stop with a trackbar adjustment and returned their driver to the track scored in the ninth spot for the lap-102 restart. Kligerman remained ninth when the fifth caution of the night slowed the field on lap 121.

Knowing that the 1.5-mile track was tough on tires, crew chief Eric Phillips elected to keep his driver on the track in an effort to save his two remaining tires for later in the race. Kligerman took the lap-125 restart from the second position, but fell back to fourth when another caution occurred four laps later. On the ensuing restart, the No. 77 Camry subsided to the 10th spot.

On lap 150, a tire went down on KBM's black machine and Kligerman was collected into the wall before spinning back down the track. The field was slowed for the incident; fortunately, the Toyota Camry was able to collect itself and remained on the lead lap. After two visits to pit road for fresh tires and repairs to the chassis, the team was forced to start at the tail end of the field in the 26th position for the restart on lap 153.

Two cautions and 22 laps later, Kligerman had advanced back into the top 10. With a set of sticker tires remaining, Phillips elected to pit under caution for four tires and fuel with a trackbar adjustment and the No. 77 Camry returned to the track scored in the 16th position for the restart on lap 182. One lap later after a four-car accident, the talented wheelman had maneuvered his way up to the 10th spot.

The timing of the caution seemed to be perfect for Kligerman and his team, who had fresher tires than many teams inside the top 10. But after a lengthy cleanup process, the field went back green with only five laps remaining. Over the closing laps, he picked up three more spots and brought home a seventh-place finish in the season finale.

The Toyota Racing team ended the season with three top-five and 13 top-10 finishes, including four of the final six races. Kligerman led 45 laps on the season and completed 97.4% (5856 of 6012) of the total laps.