He achieved a top-10 starting position and brought the black machine home in second place, one position shy of a second team victory with his brother's young team.

Similar to what team owner-driver Kyle Busch did at Chicagoland (Ill.) Speedway in Joliet last week, returning to the second season event at a track where they had notes from an initial run, Busch will once again tackle the Kentucky track. 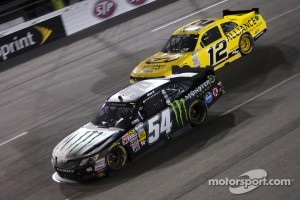 Having learned from the first event and worked with the team since then, Busch hopes to improve one position on his last attempt, securing that first-place victory.

It was a different car from the KBM fleet, that weekend, one that saw success with top-five finishes for each of the Monster Energy drivers earlier in the year.

This Saturday, however, Busch will attempt victory in KBM's newest chassis, first raced at Atlanta Motor Speedway with owner-driver Kyle Busch, who earned the team's first pole position and a seventh-place finish.

This week's Camry has improved modifications designed for KBM's intermediate-track program, which has shown growth throughout the season.

Matt Crafton will support the No. 54 team by practicing and qualifying the car while Busch is in Loudon, NH preparing his NASCAR Sprint Cup Series ride.

Busch will travel to Kentucky Saturday afternoon to be present for the Kentucky 300 start, his 11th run this year in the Kyle Busch Motorsports No. 54 Monster Energy entry.

Despite having to start from the rear of the field due to the driver change, Busch is looking forward to the challenge of Kentucky Speedway once again.

With four races under his belt in the "Bluegrass State," Busch is prepared to notch a win for himself, for Monster Energy and for his brother's Nationwide Series team.


You are pulling double-duty again this week; preparing for the Cup Series race in New Hampshire and racing the KBM Nationwide Series car in Kentucky - what do you feel your chances are for victory in the No. 54?"It will be a little difficult driving from the back. Due to the schedule, Matt Crafton will qualify the car for us.

But as we saw last week when Kyle finished second in his Chicago return, it works to take the notes from the first run earlier in the year, improve on that, and get the better result you are looking for.

That is what we are hoping for here. Mike (Beam, crew chief) and the team have a lot of confidence right now and it shows the level of improvement. I can't wait to jump back into that 54 car and see if we can do one better this time around."


You've had a strong run the past few weeks, finishing top-10 the last six races, what is the momentum like going into Kentucky with Kurt Busch this weekend?

"We are taking our newest car, #011, to Kentucky. We ran well the first race with car #008, but we have improved on our intermediate package since then.

Matt Crafton will practice the car and qualify, so we will have to start in the rear. But we will manage our practice session time, and come up with a pit strategy to get Kurt up front and contend for the win.

Everyone is doing a good job on the team and in the race shop over this tough 16-race stretch. I believe we are getting all of our systems in place to finish strong toward the end of the 2012 season."

Chassis KBM-011: KBM will unload car #011, raced as a new chassis at Atlanta (Ga.) Motor Speedway with Kyle Busch who earned the team their first pole position of 2012 and finished in the seventh position. This will be the car's second start. The backup machine is Chassis KBM-007, regularly traveled as a second team car.

Wallace and No. 01 Chevrolet team ready to take on Kentucky