Kyle Busch's schedule included double-duty this weekend, preparing his NASCAR Sprint Cup Series car from Michigan International Speedway in Brooklyn, and racing his own Kyle Busch Motorsports (KBM) Nationwide Series car at Circuit Gilles Villeneuve in Montreal. The team owner's goal Saturday was to add a victory in Canada to his International racing resume, which already includes a win in Mexico. The race played out as the team hoped, positioning Busch in contention for the lead. A cut tire towards race end, however, forced the team to pit unexpectedly, foregoing the chance to battle for the win, and placing the team in 10th at the checkered flag. 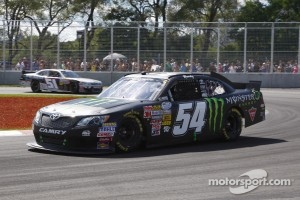 Australian driver Owen Kelly practiced and qualified the car for the team on Friday, while Busch remained in Michigan. After setting the car close to how they felt their team owner would prefer, the No. 54 team secured a fifth-place starting position. Once Busch made the trip to Canada and due to the driver change on race day, NASCAR rules required the team to drop to the rear of the field upon race start. This put Busch in 41st at the green flag start.

Through the first of 74 event laps, the 27-year old Las Vegas, Nev. native drove his Monster Energy machine into the 22nd position. Crew chief Mike Beam quickly implemented their fuel strategy plan, bringing the team to pit road on lap four, under green-flag conditions, to fill the car with Sunoco fuel. Busch described the pit stop as, "good, I'm a little loose," and otherwise was focused on his lap times.

The first of eight full-course caution flags waved, but the team chose not to visit pit road and moved into the top-five of the field upon restart at lap 22. After another quick caution and subsequent restart on lap 23, Busch made an aggressive move to second place, behind leader Danica Patrick. The team chose to make their second visit to pit road on lap 29, where the driver again described the pit stop, "I could have taken a little more air out of the rear, but that was a good stop." The team was positioned in 25th place as they reentered the field.

Working his way back through the course while green-flag laps continued, Busch was quiet on the radio and focused on the task at hand. At lap 37 he was 14th, and then by lap 41 the black machine was inside the top-10 at seventh place, running faster lap times than the leaders. Busch's veteran spotter Tony Hirschman reminded his driver, "We are the first one in our fuel sequence on fresh tires, go get 'em one by one."

The team pitted on lap 46 while a course caution flew, to take on fresh tires, fuel and to make further car adjustments. At this point, the crew knew they would need a significant amount of caution laps in order to make it to race end without refueling again. Likely the team would have to visit pit road one more time before the checkered flag would drop.

At lap 58 and from the second position, the team pitted to add five seconds of Sunoco race fuel and to replenish two left-side tires. It was a gamble to pit at this time, losing track position down to 13th, but necessary to ensure the No. 54 Toyota would finish the race with enough gas to power it.

During another caution-period restart on lap 63, Busch gained spots to 11th, and then worked his way to fifth place when another full-course caution took place at lap 70. By now, the team knew there was enough gas to complete the event, telling their driver over the radio, "We are the best with tires and fuel, go for it!" Other teams were not sure at this point whether they could make it to the finish on their fuel strategy plans. Everyone knew these last few laps would become interesting.

In Busch fashion, on a green-flag restart with two laps remaining in the scheduled 74-lap event, the KBM owner-driver made an exciting move through the "S" turns and was battling for the lead with race leaders Jacques Villeneuve, Billy Johnson, Ricky Stenhouse Jr. and Brendan Gaughan. What promised to be a run to the checkered flag, as planned by the new team, turned into heartbreak when Busch relayed to his group that a left-rear tire had gone down. Close racing through the tight turns of the road course, caused another competitor to cut across the No. 54 Camry, cutting the team's tire and causing it to go flat.

A subsequent yellow-flag caution on track allowed the team to visit pit road one final time to collect four fresh tires, however, the track position lost recorded the No. 54 in the 21st position. "It's demolition derby time," commented Busch to his team, knowing more full-course cautions were inevitable.

It wasn't the result Busch and team were hoping for as they entered the Canadian event. Knowing they could have been in position to take the lead during those final event caution laps, if not for a blown tire, was hard to ponder. The team will regroup and head to Bristol (Tenn.) Motor Speedway this week, where Busch will once again attempt to register that first victory with his Nationwide Series group.

Justin Allgaier recorded his first win in the NASCAR Nationwide Series this year and third of his career. Sam Hornish Jr. finished in the second spot, while Villeneuve, Elliott Sadler and Ron Fellows completed the top-five finishers. There were eight caution periods for 22 laps of the race along with 12 lead changes across six drivers. The No. 54 Monster Energy team gained one position to 10th in the Owner's Point standings, 133 points from the leader.