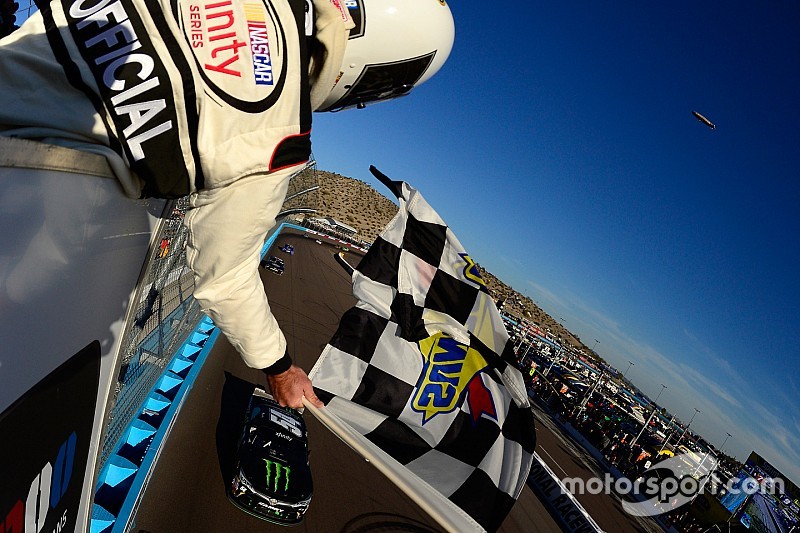 Kyle Busch left little doubt as to who was going to win the NASCAR Xfinity Series race at Phoenix and Chris Buescher is trying to do the same when it comes to the series championship race.

Busch led 190 of the 200 laps on his way to a dominating victory in Saturday’s DAV 200 at Phoenix International Raceway. It’s his sixth series win of the season and the 76th of his career for the series’ all-time wins leader.

“This car was really good. You can’t take any of these wins for granted. We had fun and enjoy what we’re doing right now and may have learned something for the (Sprint Cup) race tomorrow,” said Busch.

“I felt like I could just hammer the throttle down and the car would stick, that was probably the biggest thing.”

Though he fell a lap down late in the race, Buescher finished 13th and holds an 18-point lead over Chase Elliott in the series standings heading into next weekend’s season finale at Homestead, Fla. Buescher can clinch his first championship by finishing 13th or better in the race.

“We never really run good here at Phoenix. Something about this place doesn’t work for us very well,” Buescher said. “We’ll be able to go to Homestead and if we pretty much stay out of trouble – run fifth – that would be just fine.

“Even though they gained some points on us, honestly, unless something crazy happens at Homestead, it’s just not going to be enough (for them).”

Dillon remains in the title hunt and trails Buescher by 22 points and Regan Smith will head to the series finale trailing Buescher by 24 points.

Elliott, who won the series championship a year ago, said it was hard to gain a lot of ground on Buescher in Saturday’s race.

“This race had ‘green-flag’ (run) written all over it,” Elliott said. “The only chance was to gain some spots on pit road somehow. It just took me too long to gain the ground on the race track.”

Elliott said it will only take “one mistake” by Buescher next week to open the door to himself and the other title contenders.

“We certainly do have a chance – 18 points isn’t really that much,” he said. “That’s one little mistake away from being right back in it. That one small mistake can gain you a chunk of points. That’s all you can ask for.”

The race was slowed three times by caution for 18 laps. There were five lead changes among three different drivers.