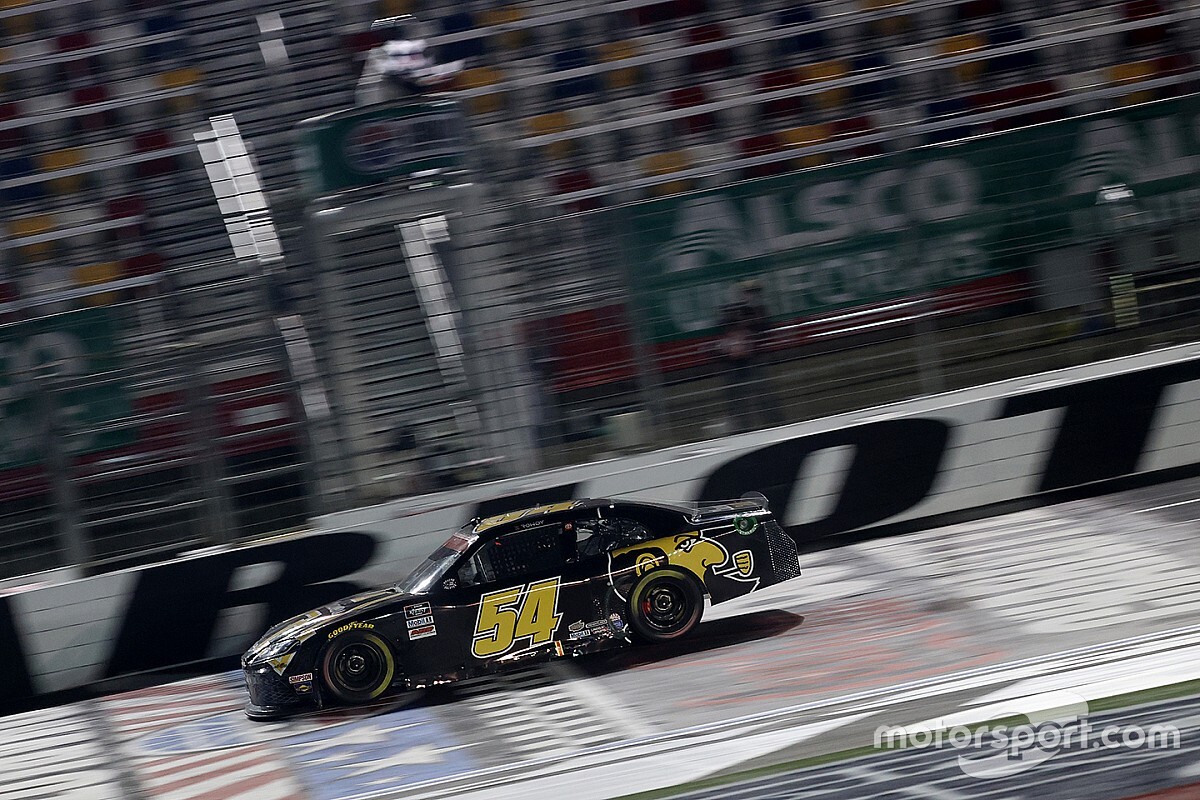 Kyle Busch may be the all-time NASCAR Xfinity Series wins leader but his victory Monday night at Charlotte Motor Speedway was one of his hardest earned.

Busch overcame a pit road speeding penalty to lead the way as the race went into overtime only to see Austin Cindric get around him on the restart.

On the final lap, Busch made one final charge to reclaim the lead from Cindric and held off Daniel Hemric to take the victory in the Alsco 300.

The win is Busch’s first in the series in the 2020 season, 97th of his career and ninth victory at Charlotte. He has said he will stop competing in the series after he captures his 100th win.

“I thought the outside (lane) was the right way but obviously it wasn’t,” Busch said. “Those guys put up a whale of a fight on the restarts. I was really surprised at that. I guess I’m not that good at it any more.

“Most importantly, I want to wish the 2020 graduating class from Appalachian State congratulations on getting their diplomas. It’s a little different I know but hopefully this will lift your spirits a little bit. It was pretty cool to score a win here in Charlotte as always.”

On Lap 147 of 203, several drivers headed down pit road to begin the final round of green-flag pit stops. Chase Briscoe was penalized for speeding on his stop and had to make a drive-thru penalty under green.

Both Busch and Brandon Jones were also both penalized for speeding on pit road during their respective stops.

The engine let go on Timmy Hill’s car on Lap 155 to bring out a caution before all of the green-flag stops were complete. Both Briscoe and Chastain, who were behind Hill, hit the wall during the caution.

After pit stops, Cindric cycled into the lead on the restart on Lap 163, followed by Justin Haley, Michael Annett, Myatt Snider and Gragson. Busch restarted 10th.

On Lap 172, Briscoe got into the wall in Turns 1 and 2 to bring out a caution and bunch the field once again. Several drivers elected to pit but Cindric remained on the track.

The race returned to green on Lap 176 with Cindric out front followed by Gragson and Haley. Busch restarted sixth after pitting for new tires.

Austin Hill wrecked in Turn 2 on the restart to immediately bring out another caution. Cindric remained out front on the restart on Lap 184 followed by Gragson, Busch, Haley and Snider.

Snider got turned into the wall on the backstretch by Justin Allgaier on the restart to again bring out a caution. Cindric remained in the lead on the restart on Lap 189 followed by Gragson and Busch.

With 10 laps remaining, Busch powered by Gragson and then Cindric – both on the inside – to retake the lead.

Riley Herbst spun off Turn 4 with seven laps to go to once again put the race under caution. On the restart on Lap 197, Busch was followed by Cindric, Gragson and Burton.

A big wreck erupted on the restart as Gragson got loose under Burton which sent the race into overtime. At the start of overtime, Busch led the way followed by Cindric and Hemric.

Busch and Chastain traded the lead in the second segment with Busch coming out on top for the Stage 2 victory.

Following the break between Stages 1 and 2, the lead-lap cars elected to pit with Busch the first off pit road. On the restart on Lap 53, Busch was followed by Chastain and Briscoe.

Ryan Sieg went to the garage under the caution with an engine issue and Jeffrey Earnhardt received a penalty for removing equipment from his pit as he drove off pit road with the jack attached to his car.

Chastain quickly pulled ahead on the restart to reclaim the lead in the race.

With 20 laps to go in the second stage, Chastain continued to hold off an aggressive challenge from Busch for the lead. Briscoe got around Busch to take the runner-up position on Lap 73.

With nine laps remaining in the stage, Busch got back around Chastain for the lead as both battled lapped traffic.

Once he finally wrestled the lead away from Chastain, Busch cruised to the Stage 1 victory.

Haley was third, Gragson fourth and Jones completed the top-five.

Chastain, who started on the pole, led the first four laps when Kody Vanderwal hit the Turn 2 wall to bring out the first caution.

Most lead-lap cars remained on the track and Chastain continued to lead when the race returned to green on Lap 8.

On Lap 21, NASCAR threw a competition caution to allow teams to check tire wear. Several lead-lap cars elected to pit but Chastain remained on the track and in the lead when the race returned to green on Lap 26.

On Lap 29, Vanderwal’s car appeared to blow an engine, which brought out another caution. Chastain remained the leader on the restart on Lap 33.

Busch quickly pulled out front of Chastain to grab the lead but exiting Turn 4 got loose and Chastain reclaimed the top spot at the start of Lap 34.

Busch got back around Chastain on Lap 39 to reclaim the lead as Haley continued to run third.