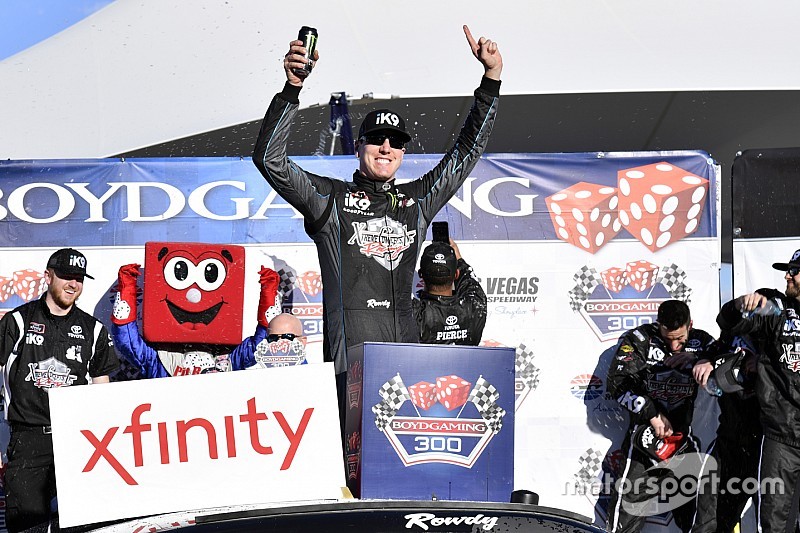 It’s two down at Las Vegas Motor Speedway and one to go this weekend for Kyle Busch.

Busch, the only driver to win in all three NASCAR national series race on the same weekend at the same track, has set himself up do to it for the first time in his hometown.

Busch has accomplished the feat twice at Bristol, Tenn., but with his win Saturday in the Xfinity Series race, he’s now two-for-two at Las Vegas so far this weekend.

Saturday’s victory did not come easy.

Busch had to pit under green early in the race for a loose wheel and fell a lap down. He got back on the lead lap in Stage 2 and took the lead for the first time early in the final stage. Busch then had to hold off a stiff challenge from John Hunter Nemechek to claim the victory in double overtime.

The win is Busch’s first in the series this season and 93rd of his career.

"I didn't get myself back in the game, I just knew to keep fighting and working," Busch said in Victory Lane. "It was really enough to come back from one of those setbacks. I wasn't sure how we were going to be able to do it down a set of tires.

"We got a lucky break with a caution during the second stage That kind of got us back on cycle and we were able to put the first set (of tires) back on with fresh wheels so we didn't have any more issues there.

"It's cool to be able to back up Christopher (Bell's) win last week and get the Supra back in Victory Lane with me. I wanted to be the first one but he had to show me up a little bit last week."

Busch said he felt Saturday's race could be the toughest of the three he was running in this weekend to win and looks forward to completing the weekend sweep on Sunday.

"I thought this was going to be the toughest of the three but we could never get the balance right," he said. "I was either way too tight or way too lose. I could never find a happy medium.

"Overall, I feel like our Cup car is pretty good. The car has some speed. We ran a lot out there in the pack and in traffic and it's going to be an interesting race tomorrow. Make sure everybody tunes in."

On Lap 121 of 200, Justin Allgaier, who had spent much of the race running in the Top 10, fell off the pace with smoke billowing from his No. 7 Chevrolet.

After telling his crew, “It’s done,” over his radio, Allgaier took his car to the garage. He had finished second and third in the season’s first two races.

With 70 laps left in the race, Busch held about a 1-second lead over Christopher Bell with Tyler Reddick running in third.

A final round of green-flag pit stops began on Lap 147 when Dillon and Annett dropped down to pit road.

When the cycle of stops were completed on Lap 151, Busch remained in the lead but Reddick had moved up into the runner-up position. Bell, Cole Custer and Nemechek completed the top-five.

With 30 laps to go, Bell held the second position but continued to be challenged by Reddick. Busch’s lead over Bell remained under a second.

Bell got to rear bumper of Busch with 25 laps remaining, giving Busch a serious challenge for the top spot.

With 19 laps to go, Bell went to the low side to take the lead but a lap later he scrubbed the wall and fell back into second as Busch reclaimed the lead.

On Lap 187, Ja Junior Avila spun off Turn 4 and slid through the frontstretch grass to bring out a caution. The lead-lap cars all elected to pit, with Busch coming off pit road first followed by Bell and Reddick. The race returned to green with six laps remaining in the race.

Jones wrecked with two laps to go after contact with Custer to send the race into overtime and Busch in the lead.

Reddick held on against a fast-approaching Bell to take the Stage 2 victory.

“I think clean air was one part of us being fast. This car is great and these guys have put a lot of work in,” Reddick said during the break. “I know it’s good because I’m not good at running the bottom (groove) and we’re still good.”

Following the break between Stages 1 and 2, Reddick was the first driver off pit road. He led the way on the restart on Lap 53, followed by Brandon Jones, Nemechek and Custer.

On Lap 59, Zane Smith got loose below Austin Cindric and sent him spinning to bring out a caution. Cindric avoided serious damage from the incident, but did appear to lose a hood flap.

Reddick remained out front when the race returned to green on Lap 64.

With 25 laps remaining in the stage, Reddick held a small advantage over Nemechek. They were followed by Jones, Bell and Allgaier.

Bell, who started the race from the rear of the field, moved into the runner-up position behind Reddick on Lap 73.

With 10 laps left in the stage, Reddick continued to hold a more than 2-second lead over Bell with Nemechek following in third.

Custer easily held off Jones to pick up the ninth stage victory of his career.

“I think our car has been pretty good, especially on the long run,” Custer said during the break. “The top off Turn (4) isn’t working that great for me. We’ll have to make some moves now to get back up (front).”

Reddick finished third, Bell was fourth after starting from the rear of the field and Nemechek completed the top-five.

Custer, who started on the pole when qualifying was rained out, took early control of the race.

Donald Theetge got loose in Turn 3, spun and got hit by Joey Gase to bring out the first caution on Lap 3. Custer continued to lead the way when the race returned to green on Lap 8.

Over the next two laps Cindric and Custer traded the lead before Custer moved back into control on Lap 12.

Kyle Busch was forced to make a green-flag pit stop on Lap 15 with a right-front loose wheel. He rejoined the field in 33rd and one lap down.

With 25 laps to go in the first stage, Custer held a more than 2-second lead over Nemechek. Reddick followed in third.

Custer had expanded his lead to more than 3.5-seconds over Reddick with 15 laps to go in the stage. Jones had moved up to third.

On the next lap, Jones got around Reddick and moved into the runner-up position.

Both Bell and Stephen Leicht had to start the race from the rear of the field after making unapproved body adjustments to their cars prior to the race.

Bell had "the most fun" racing Kyle Busch for Xfinity win