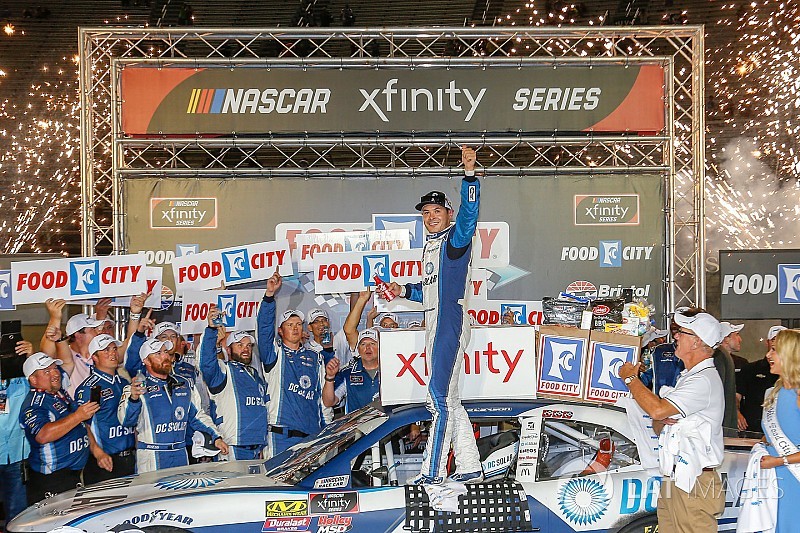 Kyle Larson picked up his first NASCAR victory at Bristol (Tenn.) Motor Speedway and will now try for two-in-a-row.

Larson held off Christopher Bell in a two-lap overtime shootout to win Friday night’s Food City 300, his first NASCAR national series win at Bristol, which he repeatedly refers to as his “favorite track.”

The win is his fourth in the series this season and 12th of his career. Earlier Friday, he won the pole for Saturday night’s Monster Energy NASCAR Cup Series race at the track.

"It feels really good. I wish Kyle Busch wouldn't have had his trouble so I could have raced him but it still feels really, really cool to win a race here - finally - at Bristol," Larson said. "I've been close so many times and it's my best race track by far, I feel like.

"It feels cool to win. Hopefully we can get another tomorrow night and that would be really special as well. It's just really exciting because I've been so close so many times and I thought Bell was going to steal this one from me a couple times throughout the race. He was really good. He and I have very similar driving styles.

"We had the yellow there with two to go and I was make, 'Man, again, again. I'm going to lose another one late.' But we were able to get an average restart and get the win. I can't wait until tomorrow."

A caution was displayed on Lap 259 of 300 after Chad Finchum wrecked on the backstretch. All of the lead-lap cars pit for tires and fuel with Larson the first driver off pit road.

Larson held the lead on the restart with 34 laps remaining in the race followed by Chase Elliott, Bell, Allgaier and Ty Dillon.

Allgaier moved into the second position shortly after the restart.

Daniel Hemric wrecked off Turn 2 with one lap to go to send the race into overtime.

Larson held off a furious charge from Allgaier to hang on for the Stage 2 victory.

Following the break between Stages 1 and 2, Larson continued to lead the way on the restart on Lap 95 followed by Dillon, Elliott, Logano and Matt Tifft.

Two laps later, Logano moved into the second position as Allgaier moved up into third.

On Lap 105, Spencer Boyd and Vinnie Miller wrecked in Turn 1 to bring out a caution. On the restart on Lap 115, Larson led the way followed by Logano and Allgaier.

Allgaier powered past Logano and into the second position shortly after the restart.

With 40 laps remaining in the second stage, Larson had moved out to a more than two-second lead over Bell with Allgaier dropping back to third.

On Lap 142, Chase Briscoe got loose coming off Turn 4, made contact with Ross Chastain and wrecked into Turn 1. On the restart on Lap 150, Larson led followed by Bell and Allgaier.

With 15 laps remaining in the stage, Larson held a slight advantage over Bell as Allgaier remained close behind in third.

On Lap 160, Miller wrecked in Turn 2 to bring out another caution. The race returned to green with five laps left in the stage and Larson still in the lead and Allgaier running second.

Logano had to restart from the rear of the field after his team was assessed an uncontrolled tire penalty during his pit stop.

Larson went from fourth to first in two laps on a late restart to take the Stage 1 win.

Kyle Busch took early command of the race and ran out to a nearly two-second lead just seven laps into the event.

With 60 laps to go in the stage, Busch held a 2-second lead over Bell, followed by Larson, Logano and Dillon.

With 40 laps remaining in the stage, Busch’s lead had increased to over four seconds as Larson continued to challenge Bell for the second position.

Only 12 cars remained on the lead lap with 30 laps left in the first stage as Busch built his lead to more than five seconds.

Larson finally made his way into the runner-up position with 23 laps left in the stage as Bell dropped into the third position.

Busch brushed the Turn 2 wall with 20 to go but continued on. His lead over Larson had dropped to less than four seconds.

On Lap 70, Busch hit the Turn 4 wall as he appeared to have a tire go down and a caution was displayed. “It’s (expletive) killed,” Busch said of his car over the radio. Larson inherited the lead after the incident.

After Busch took his No. 18 Toyota to the garage, he said, “Just rubber on top of rubber. The rubber build up that was happening – I just got into the corner a little too hot and just got up into the fence a little bit and then I don’t know, two or three laps later it blew out.”

When the race returned to green on Lap 79, Custer – who elected not to pit – took over the race lead followed by Tyler Reddick, Logano, Larson and Bell.

Less than two laps later, Larson had already powered his way into the lead.