Landon Cassill is looking to rebound at Darlington Raceway

The team will focus on getting back into the top-30 at Darlington.

GAFFNEY, S.C. (May 7, 2013) – After a dramatic last lap wreck that left the No. 4 Flex Seal Chevy merely feet from the start/finish line, the team will look to rebound at historic Darlington Raceway for the running of the VFW Sport Clips Help A Hero 200 on Friday, May 10th.

Returning to the car will be Landon Cassill. After being cleared by doctors at the infield care center last week, the young driver will look to improve on the team’s best finish of 17th from Talladega. Cassill had hoped for a better finish as he removed the scoring transponder from the car and personally walked it across the line, but was instead scored in 17th, the last car still running. 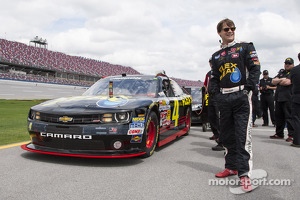 Cassill and the No. 4 Flex Seal Chevy will be led by Crew Chief Marc Browning this week, in a move to strengthen the organization and improve the performance at the track. Browning has spent time working with both Cassill and Wallace this season on both race entries.

The No. 4 Flex Seal team will utilize JDM Chassis 014. This is the same Chevrolet that competed at Texas and Richmond with Cassill behind the wheel. In both races, the car ran in the top 15, but suffered from an engine failure and a bad set of tires. This week the team will look to finish strong and lock themselves back into the top-30 in the Owner’s Points battle.

Landon Cassill Quotes: “With Talladega behind us, and another decent finish, we can focus on getting back into the top-30 here at Darlington. This race is also a race of attrition, a lot of cars will wreck. I think we can go out and have a solid top-20 run, which should position us well in the points. Also this week, I will be working closer with Marc Browning, which should help the team. I am still bummed about the end of last week, but if we can go run well again, I think it says a lot about this team.”