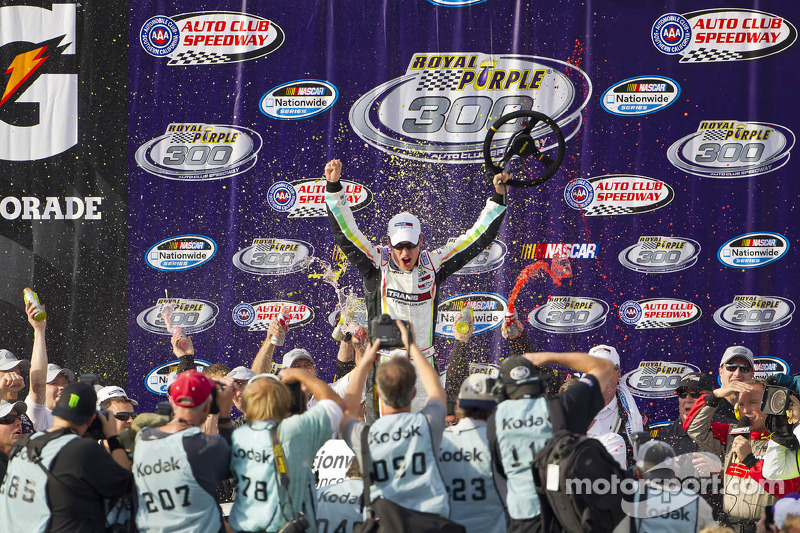 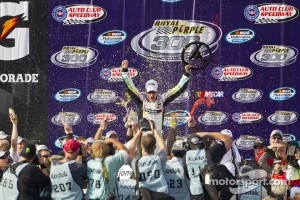 Logano started on the pole and led eight times for 92 laps (of 150) at the two-mile race track.

JOEY LOGANO, No. 18 Translux Toyota Camry, Joe Gibbs Racing Finishing Position: 1st What was the key to today's win? "Adam Stevens (crew chief). He gave me a great car man. That's awesome. That was the class of the field all day. They had plenty of shots at me. The restarts were hairy. I was good for a few laps then I would fall off and then my car would come back. And then it was awesome. A lot of fun to run this Translux for one race here and get them a win. It's good to finally be back in victory lane man. It means a lot to win these things."

How does it feel to win here again? "It was awesome to in here again. It's been a little bit since I got my last victory and I felt like we gave away a couple recently - Nationwide races. Daytona -- I felt like we won that one. Last week had a car that was capable of winning. Today, we finally capitalize on a car that was capable of winning. Man, it feels good to get back here to victory lane in Fontana. Translux -- thanks for them coming on for one race here and getting them a big 'W' -- so that was exciting. Man, it's just good to be back in victory lane. I forgot how much fun it was to do burnouts. It's a lot of fun."

How much work was done on the car during the race? "We didn't change much. We didn't change much from when we unloaded. We knew what we had to work on. We stayed focused in practice on what we needed to do to fix it. Our practice is the most important part of the whole weekend in my eyes. We got our car just right and we got something for them tomorrow. And, man we had it."

How will this help with Sunday's NSCS race? "Jason Ratcliff (NSCS crew chief) texted me last night and said, 'Let's go to dinner tomorrow night after you win that Nationwide race tomorrow.' I said, 'That's right -- we are.' I did my part. Now I can go to dinner with him."

How were you able to go from third to first on the final restart? "I thought all the restarts were crazy. That was the most tame restart I've had the whole race, really. I knew the 2 (Elliott Sadler) in front of me had no tires and we had tires. I had to get by him really quick. When we were going into turn one I was blocking the bottom trying to get underneath him and I thought about going down the center of a couple cars there. I went in the corner behind him and hoped he washed up and he washed up just enough for me to get my nose underneath him and we were able to clear him. Once we cleared him I had to get enough room to draft -- these Nationwide cars don't have a whole ton of horsepower, so if you're four or five car lengths in front of a guy, they'll draft you right back down on the straightaway. Once you get six or seven car lengths, you can feel a little bit more comfortable. I had a car that was good enough to take off on that last restart. We weren't really good on restarts the whole race. Adam (Stevens, crew chief) and the boys made a couple good adjustments on the last restart to help us take off better."

JOE GIBBS, Owner, No. 18 Translux Toyota Camry, Joe Gibbs Racing What does it mean for Joe Gibbs Racing Toyotas to have now won eight consecutive races at Auto Club Speedway? "It means a lot -- I don't know how that happened. These things are so hard to win. I honestly, as everybody knows if you have followed what has happened to us in Nationwide, we spent years and years trying to win a race. It's a credit to all the guys. Adam (Stevens, crew chief) would probably tell you the same thing and Joey (Logano). We have a hard-working bunch of guys that we have put together in Nationwide and we also do a lot of it in our Cup operation. We have a lot of -- we work back and forth with each other. I think it's really a credit to the Nationwide shop. I really appreciate those guys. The motors, Mark Cronquist (JGR engine builder) and everybody has done a great job. We really appreciate Joey driving it the way he did today and Adam all the calls that were made and all the calls on pit road. We love coming to Southern California, it's a great place. We spent 30 years here running all over the place and it's fun for me to come back and be here. We really appreciate our fan base here also."

ADAM STEVENS, Crew Chief, No. 18 Translux Toyota Camry, Joe Gibbs Racing How was your view of the race from the pit box? "It was a very even race today. Just the grip level of this race track and the multiple grooves and how wide it is, and the parity of the field, I don't know who wouldn't like watching that race -- it was amazing. So many lead changes and it really put it in the driver's hands where you could move around and change a lap time. That's what I saw out of the top-five all day long, which driver was getting the most out of their car. Joey (Logano) obviously, he's the master of that. He can do that here, he can do that lots of places, but that's what impressed me the most was just the little tiny adjustments that are probably even hard to notice from TV or the stands that these drivers can make and change the lap time of their cars."

BRIAN SCOTT, No. 11 Dollar General Toyota Camry, Joe Gibbs Racing Finishing Position: 4th How does it feel to get a top-five finish? "Our Dollar General Toyota has had speed all year and we struggled the first few races to get the finishes we felt like we deserved. California is an awesome speedway for Joe Gibbs Racing and congrats to Joey Logano and the Translux guys. I'm just happy for our team, it was a run, a solid effort. We brought home a fourth -- it feels like a win right now."

How was your race? "I'm proud of everyone at Joe Gibbs Racing. What a great day to win the race and the second car to finish top-five. I'm just proud -- I wanted so badly to get a good finish for these DG guys, everybody at Dollar General. They've been so supportive through so much bad luck early on. We had such a fast car at Vegas and we were leading. To have that disappointment -- it just feels good to bring home a fourth- place finish for these guys. Everybody at Toyota in their backyard -- just really proud and couldn't be happier."

KENNY WALLACE, No. 09 Toyota Camry, RAB Racing with Brack Maggard Finishing Position: 7th How was your race? "This finish was really what we needed. Our whole team has been beat up pretty bad this year with some bad luck from a blown tire to a blown motor. To have a seventh- place finish against the best in the whole United States like Kyle Busch. I believe my highlight of the day, I felt like a kid passing Kyle Busch five-wide on the apron with about five laps to go. We just needed a seventh-place finish, that's all there was to it. Our cars are better this year -- they're faster and I'm excited."

JASON BOWLES, No. 81 American Majority Toyota Camry, MacDonald Motorsports Finishing Position: 15th How was your race? "It was okay, the finish was good -- we needed to score some points. I can't thank all the guys from American Majority and MacDonald Motorsports, Toyota for all their support this week. We've had two races with Toyota now and they've both been really good. We've had a warm welcome from them, so I can't thank everybody enough. The race went good - we ended up 15th. We would have liked to be a little bit better, I think we were a little better there at the end, but we lost a lap there in the middle and struggled to get it back. We finally got it back at the end and we got the car a little bit better. I think I earned a lot, probably more than everybody else just because I've never raced on the oval here before and it was only my fifth Nationwide race. It's something consistent that I run every week, but the race was good. I'm looking forward to Texas now."

How was it racing so close to your home in Ontario? "It was good. I got to see my family and everybody got to come out and watch. I had family all around the area that came out. A lot of friends -- my neighbors that I grew up with my whole life on my street just texted me and they're here at the race track. It's neat that everybody can come out and watch and see where I came from and see what I've done and realize why I've worked so hard for so many years and missed all those family functions and didn't play with my friends like everybody else. Now they understand what I was doing and why I did what I did."