Logano top Toyota driver in Charlotte 300 with the win 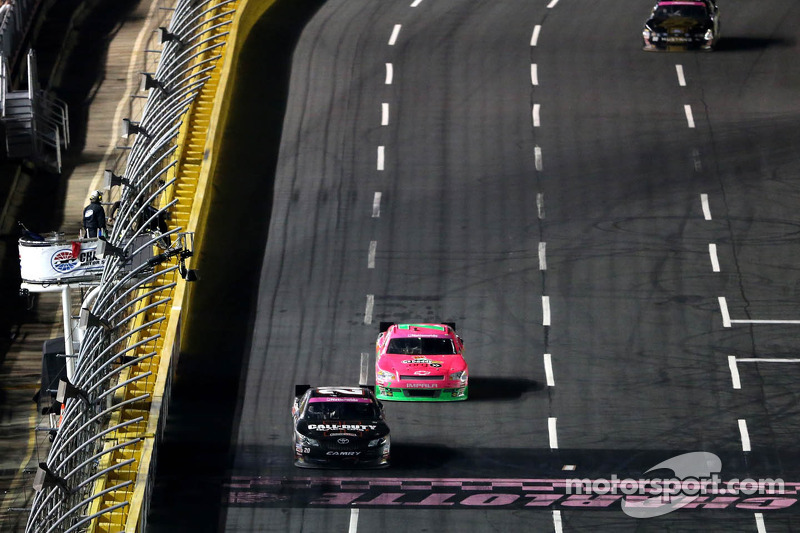 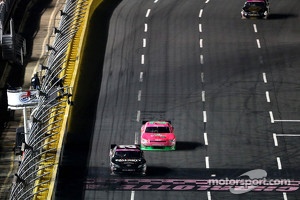 Logano led a race-high 62 laps (of 200) en route to his first NNS victory at the mile-and-a-half Charlotte oval. This is Logano's eighth NNS win of 2012, and the 17th NNS victory of his career.

Did you question the call to take two tires on the final pit stop? "I should know better than to question Adam Stevens (crew chief) -- he's just amazing. He's given me great cars every single weekend. We had to work really hard for this -- the 22 (Brad Keselowski) was pretty good the mid-part of the race. He made some good adjustments -- I found a new line and was able to make this GameStop Toyota fast enough to win. It was really cool to win a Dollar General race -- that is one of our sponsors here at Joe Gibbs Racing. Cool to win that race for them."

Why did you change your line late in the race? "I didn't have an option -- I was getting beat and I knew I had to find something. I moved to the top and I was like, 'Hey, there's something here.' Just kind of had to adjust my style a little bit and get this little 20 car rocking and get these guys in victory lane one more time. I still have a few more left."

Is this race track fun to race on when the tires wear out? "This track is fun on older tires when you start to get to run the wall. You can run as high as you want or as low as you want or anywhere in between and it makes it a lot of fun. It's tough. There's no point when you are running the wall that you can have any room for error there. It makes it fun up there. These guys are really good and it's a lot of fun driving their cars."

Do you wish you could still run for the Nationwide driver's championship? "I wouldn't trade a win for anything -- no matter what. It would be cool if we got to run for points like we used to. I understand why NASCAR made that decision and I think it's brought the championship really close for those guys. It's one heck of a championship run. I am still able to go out there when I run the 18 car and try to win the owner's championship, which I think we are still leading after this race. That's cool to be involved with that for sure. I understand why they do it and I wouldn't trade a win to be able to run for points. It's all about wins to me."

Did you learn anything for tomorrow night's race? "I think when you run these Nationwide races, you always find something or at least reassure yourself on the kind of direction you're going -- or the wrong direction you're going in practice. I feel like we were going the right direction in Cup practice before we started this race. Everything kind of went as expected over here -- the way the track changed and moving around and doing things. I think I found a couple little things. I can't tell you, because then I would have to kill you, so I don't want to do that for your sake. I think it's definitely -- it's a help to run these things. Plus, it's a whole heap of fun."

Was there any consideration to gamble on fuel mileage at the end of the race? "The last stop, well the last caution -- let me go back here -- came out just a few laps short of everybody's final pit window. It put us all in a spot where you weren't going to be able to stretch it. Nobody was going to be able to stretch it. I'd say a couple more laps, if the caution would have gone a couple more laps before it came out there -- the 22 (Brad Keselowski) gets incredible mileage and he probably would have been able to stretch his fuel. We probably wouldn't be sitting here right now. It came out when it did and they opened pit road and everybody was short. You never know how short the rest of them are -- I think we were about the same on mileage as most of the field. That just sets you up to where we were five (laps) or 10 (laps) short and nobody was going to make it. Then it's just a guessing game of who is going to come put two (tires) on and try to take advantage of the tires and who is going to get a splash of fuel and try to minimize their time on pit road. We kind of saw what others did and had a bit of a strategy worked out for these types of situations before we get here. It worked out."

What would it mean to sweep the weekend? "It's a big deal. I was sharing with some guys earlier, we've been doing this 21 years and I used to make fun of my dad (Joe Gibbs, team owner) for getting nervous and stressed out and now I'm right where he is. It's hard to enjoy the races because you've seen everything happen in a race, but our guys -- we just have great faith and we just have a neat team of guys -- Nationwide and Cup. They work well together and they've learned a lot of life lessons along the way, so it's kind of fun to kind of end of the day look back and say, 'You guys accomplished it.' Part of the joy is just the journey and then obviously capping it off with those wins is a big deal too."

How was your car on the final run? "The car there at the end -- the last run of the race was really good. The balance was spot-on. It was a little tight on entry, but it's good to be tight getting into the corner and secure and then you just land and mash the gas and drive up off. Just didn't have enough speed. The Monster Energy Camry I thought yesterday was really good -- had fast speeds in practice and everything. Tonight, you just got back in traffic and couldn't really do much. Mike Beam (crew chief) and the guys did a good job and everybody at KBM (Kyle Busch Motorsports) -- they've produced some good cars and we've been finishing up front -- top-three, top-four, top-five week in and week out. It's all we had here in Charlotte."

What did you try at the end of the race to get the win? "We just tried anything we could to get some track position. It was so hard to pass out there that you just had to do everything you can. We tried short-pitting at the end. We tried two tires in the middle of the race. Just anything we could and we ended up right where we belonged. We belonged about fifth-place and that's what we got."

Keselowski and Hornish have hard time at Charlotte 300