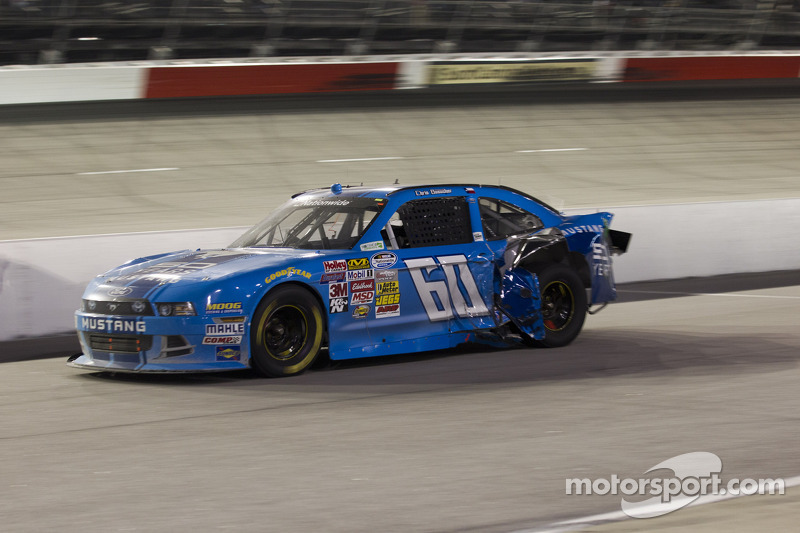 Chris Buescher started strong at Darlington after qualifying 6th, but it all went awry after an incident with Dylan Kwasniewski.

DARLINGTON, S.C. (Apr.11, 2014) – Roush Fenway Racing’s Chris Buescher exhibited one of the fastest racecars on the track during the weekend’s NASCAR Nationwide Series (NNS) action at Darlington Raceway. The rookie led Thursday’s final practice session in his No. 60 Mustang 50th Anniversary Ford and qualified a career-high sixth for Friday night’s race. Unfortunately, Buescher’s strong run came to a halt, after he was caught up in a mid-race accident that effectively put an end to his bid for victory at “The Lady in Black.”

“You know, we are racing hard and everything but I really thought we would have a little more give and take this early in the race,” said Buescher. “Our 50th Anniversary Mustang was good and I think everyone saw in practice and qualifying that we had a good race car.

“It is really unfortunate,” added Buescher. “This is not how we need to go out and it isn’t the way I like to race. I am hoping to get a little smarter race out there. I feel like I gave a lot of guys a lot of room early and I guess I was hoping for the same back. When you are on the outside getting into one, you are kind of at the mercy of somebody below you. It is unfortunate. The guys worked really hard to get the car back out so we could salvage some points.”

The race marked Buescher’s third NNS start at Darlington Raceway and his familiarity with the 1.3-mile track was noticeable immediately. When the green flagged waved, the No. 60 Mustang 50th Anniversary Ford rolled off in the sixth spot and quickly settled into the top-five. After losing ground following the day’s first pit stop, Buescher restarted just outside of the top-10 where he would remain until the No. 31 car of Dylan Kwasniewski lost control, taking out Buescher and sending the No.60 car to the garage. The team worked feverishly to correct the damage and the Sunoco Rookie of the Year contender would make it back out, finishing the day in 34th.

The No.60 Ford Mustang 50th Anniversary Mustang was fast all week, finishing fourth in first practice before topping the charts during final practice with a high speed of high speed of 170.365 with a fast lap of 28.865 seconds. The Prosper, Texas native had a solid qualifying run, with a finish of sixth after all three segments were completed.

Right out of the gate Buescher worked his way into the fifth spot by lap three where he would stay until the first caution of the day. After losing seven spots on his first trip to pit road, Buescher was intent on working his way back up the field. The track proved to be ‘Too Tough to Tame’ on lap 68, as Kwasniewski got loose into turn one, hitting Buescher twice and sending him into the path of the No. 44 car of David Starr.

The 2012 ARCA Racing Series champion headed to the garage where his team conducted extensive body repairs to the No.60 Ford Mustang, getting Buescher back onto “The Lady in Black” where he would end the day in the 34th position -- 28 laps behind.