Mike Wallace and JD Motorsports looking to Daytona, and beyond for 2013

Team in search of crew chief, qualified drivers for No. 4 Chevrolet

GAFFNEY, S.C. – While the term off-season is being used by some in motorsports, its anything but that at the JD Motorsports w/Gary Keller shops right now.

With the new Chevrolet Camaro body coming to the NASCAR Nationwide Series, the team has been making the appropriate changes to their No. 01 and No. 4 Chevrolets in stock.

And, while veteran and winning-NNS driver Mike Wallace is returning to wheel the No. 01, there are some openings for qualified drivers in the team’s No. 4 entry. 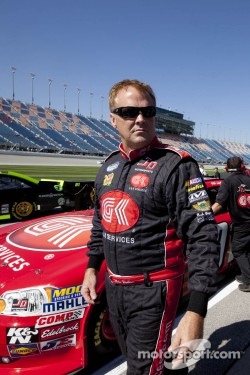 Also, the No. 01 team is seeking a crew chief for next season. And, like all teams in the three NASCAR series, they are seeking primary and associate marketing partners to become part of the team to help in their endeavors.

The team has a “first of its kind in racing” alliance with Clemson University via their Clemson Racing (ClemsonRacing.org) to connect JD Motorsports with the school’s alumni and current business associates.

From there, partnerships would promote them via the usage of JD Motorsports across the country through their Nationwide Series races.

“We are committed to run the 2013 season with our two teams,” said Johnny Davis, who will be making his 475th start as an owner at Daytona in February.

“We have done a lot of planning, bought some cars in the latter part of last year and have been improving on our motor program here and there.

“Mike and I are set to go racing, and I look forward to him driving these new Chevrolet Camaro cars next year. His experience will be a big help in this transition.

“We are also looking for an experienced crew chief to put with his team. He finished 12th in the points last year, and I’m confident we can do better next season because of what we did in 2012.”

During that campaign, the No. 01 team earned a top-10 finish, 16 top-20s, completed 95.5 percent of the laps contested, led five races and finished 12th in the Driver’s Standings.

“It’s good to know we are going forward for next year,” Wallace said. “We know we’re running the new Chevrolet Camaro. We know Johnny Davis is continuing on as our owner. We know we have cars to work on each week.

“What we don’t know is - who is going to be our primary and associate marketing partners for 2013? I know it’s tough all over, but I also know there is a solid value in what we’re doing with Clemson University.

That program is pretty unique and the entire university is behind it, which is great for everyone involved.

“I’m looking forward to driving this new Camaro next year. The first race at Daytona is going to be interesting once we get these on the track. But, we are looking farther down the road to have solid season.

“This team works hard for everything. And, I don’t see that ever stopping. I know myself, Johnny and the guys on the team are working hard to make sure we’re ready.”