GAFFNEY, S.C. (August 12, 2012) – Mike Wallace and the No. 01 Chevrolet team of JD Motorsports w/ Gary Keller twisted and turned their way to a top-20 finish in Saturday’s NASCAR Nationwide Series race at Watkins Glen International. His teammate for the weekend, Daryl Harr driving the No. 4 iWorld.com/Tradebank Chevrolet, gained eight spots from where he started to finish 30th.

After the only practice session on Friday, Wallace and Harr posted the 23rd and 29th fastest times, respectively, during the two hour session. However, part of it was marred by rain, which allowed some teams to make only a few practice laps. 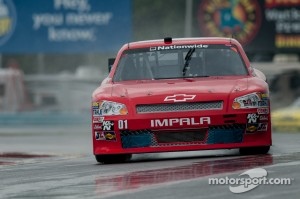 For qualifying, dry conditions on the 11-turn road course allowed for better handling. With that, Wallace posted a time to line up 28th and Harr in 38th for the initial green flag.

Once the race started, Wallace and crew chief Newt Moore had a pre-arranged strategy for fuel stops. They were going to stay out longer than other teams and hope for a caution to make everyone pit on their fuel cycle.

By lap 54, the strategy was working out as two cautions had already taken place and Wallace was running in the top-five. Hoping other teams would be forced to go three more green laps and allow them to pit, while others would have to stop again, didn’t work out when the caution waved on lap 58, then again on lap 70.

From there, Wallace raced his way through the twists and turns, kept his No. 01 Chevrolet in one piece and on the track to earn a lead-lap, 18th-place finish.

As a result of the commendable finish, he moved up to 14th in the points standings where he now trails 13th place by a mere six markers. Next week, the NNS heads to another road course in Montreal.

The JD Motorsports w/Gary Keller team is headed to Scranton, Penn. to work on their Montreal cars at the RJ Burne Cadillac dealership before making their way to Montreal.

Mike Wallace Quotes: “It was a fairly simple race for us as far as anything on the track. We didn’t go spinning off anywhere, didn’t get tangled up with anyone too bad and brought it home in one piece.

“What we did was try a different fuel strategy that would have been perfect, we were just three laps shy of it working out. If others would have gone with it, it would’ve been huge for us. But, they didn’t and we had to go with how things played out in the race.

“We were running in the top-five there for awhile before we had to pit. From there, it was just race our way through the field and get a good finish. We managed to take the checkers for 18th and moved up one place in the driver’s points, so that’s good for us.

“Now, we’ll be heading for another road course this weekend up in Montreal. The guys will spend some time in Scranton at RJ Burne’s Cadillac place to get the cars turned around before crossing the border into Canada.”

Busch overcomes hurdles at The Glen to finish sixth