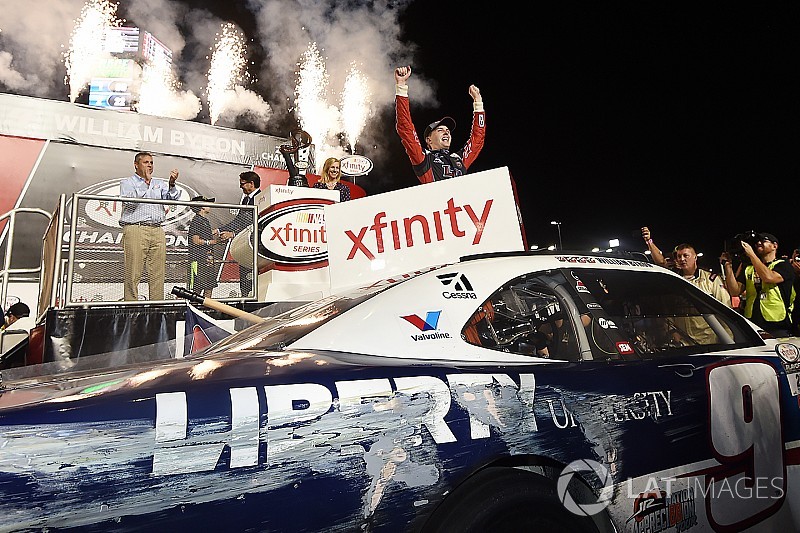 It was a day of firsts Saturday at Homestead-Miami Speedway.

"I can't believe this honestly," Custer said. "I can't say enough about this group. There's no better team that I've raced with before. We really wanted to have a good showing during Ford Championship Weekend even though we weren't in (the title hunt).

"This is just unbelievable. Going into this year there were just so many question marks. We had nothing in December. To see how far we have come is just incredible."

Byron’s championship came after a thrilling back-and-forth battle in the final stage with veteran Elliott Sadler, as Byron finally cleared him for the championship lead with nine of 200 laps remaining.

As Sadler was trying to run down Byron for another pass attempt, he ended up making contact with Ryan Preece and shortly afterward had to pit for a flat tire.

“Awesome job. Awesome job! I can’t believe it,” Byron said over his team radio as he took the checkered flag in the third position.

The champion and the race winner are both 19 years old, a sign of NASCAR’s future beginning to move into their own.

The end of the race featured a triple-burnout, with Byron and Custer celebrating and Sam Hornish Jr. also turning doughnuts as the No. 22 Team Penske Ford team won the series owner’s championship.

“He raced me clean,” Byron said of Sadler. “We raced hard for it. I have to thank God for giving me this platform to perform. Thank you guys. What an incredible crowd.”

Sadler was incredibly dejected after the race and confronted Preece on pit road. It was his fourth second-place finish in the series standings since 2011.

Tyler Reddick finished fourth in the race and Preece ended up fifth.

After Hemric was basically eliminated from title contention, this season's championship was left to be decided by three JR Motorsports teammates.

“Man, that is tough watching those guys battle like that together,” said team co-owner, Dale Earnhardt, Jr. “William did a great job running an awesome race to be as young as he is, he drove like a veteran tonight. I know Elliott (Sadler) is probably really disappointed.

"It’s hard to watch any of your guys lose one, but at least we will be taking the trophy back to Mooresville tonight. This is great for JRM and all our employees. One thing about William winning, the over-the-wall guys I’m pretty close to a lot of them. They pit my car, too. It’s pretty cool to see these guys enjoy themselves. This really effects a lot of people. I’m really glad to be a part of it.”

Custer made it look easy in the second 45-lap segment, claiming the Stage 2 victory by more than five seconds over Hornish.

Reddick finished third, Preece was fourth and Byron was fifth, and the top running Championship 4 contender.

At the end of the stage, the rest of Championship 4 contenders ended up: Sadler in sixth, Justin Allgaier in ninth and Daniel Hemric in 35th.

Following pit stops during the stage brake, Custer was the first off pit road and returned to the lead to begin Stage 2. Sadler came off pit road fourth and was the highest running Championship 4 contender as the final stage got underway.

On Lap 60, Hemric radioed his crew and told them he appeared to have an electrical issue. He immediately dashed down pit road and his team decided to change the battery on his No. 21 Chevrolet.

Changing the battery, however, still left the car initially with no power. By the time Hemric got power back and returned to the track, he was 12 laps down and well out of further title contention.

On Lap 78, Christopher Bell – who won the Truck driver’s title on Friday night – was forced to bring his No. 20 Joe Gibbs Racing Toyota to pit road after he blew his engine. That knocked the No. 20 team out of contention for the owner’s championship.

After a very back-and-forth battle, Custer finally broke free from Reddick and held on for the Stage 1 victory.

At the end of the first 45-lap segment, Hemric was running seventh – highest of the Championship 4 contenders. Sadler was eighth, Byron was 12th and Allgaier 19th.

Following pit stops during the stage break, Reddick was first off pit road and inherited the lead. “Awesome stop guys, thank you very much,” he said over his team radio.

J.J. Yeley brought out the first caution of the race on Lap 19 when he spun exiting off Turn 2.

Before the race even began, Ryan Reed was black-flagged for changing lanes prior to reaching the start/finish line and had to serve a pass-thru penalty on pit road.

Sadler livid after Xfinity finale: Preece "cost us a championship"