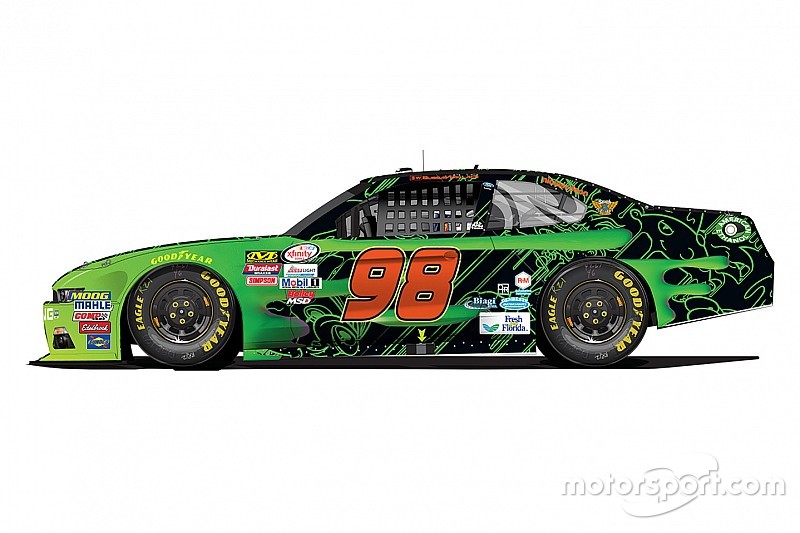 Darrell Wallace will pilot the No. 98 Nickelodeon Slime Ford for Biagi DenBeste Racing in the Chicagoland 300 NASCAR Xfinity Series race on Sept. 16.

“I’m really glad to get back behind the wheel of a race car,” Wallace said. “Chicago has always been a decent track for me where I’ve had some good finishes. I’m excited to get back in the XFINITY Series in a Ford Mustang. With the history with Biagi DenBeste Racing and RPM, we should have some good speed.

"It’s really cool to be pair with Nickelodeon. We’ve formed a great relationship over the past three years, and we’re able to do these one off races to attract the youth to the sport. With such a cool looking car this weekend, I think we’ll do just that.”

Wallace, 23, made his Monster Energy Cup Series debut this season with Richard Petty Motorsports while Aric Almirola was recovering from a spine injury. He finished a career-high 11th in his final start at Kentucky.

Most recently, Wallace won the Camping World Truck Series race with MDM Motorsports at Michigan Speedway on Aug. 12. The victory marked Wallace’s sixth win in the series where he competed in both the 2013 and 2014 seasons for Kyle Busch Motorsports and finished a career-best third in the standings his second year before graduating to the Xfinity Series tour with Roush Fenway Racing.

Wallace competed in six Xfinity races with Joe Gibbs Racing during his initial truck run. He was in his third season in the No. 6 Roush Fenway Racing Ford when funding ran out after the first 12 races. Wallace earned seven top-10 finishes and was fourth in the NXS standings at that time. After missing half the season, Wallace still ranks 18th.

Nickelodeon is also the title sponsor for the Cup race at Chicagoland Speedway on Sept. 17. Matt DiBenedetto and Jeffrey Earnhardt will sport related liveries in the Tales of the Turtles 400. Matt Tifft will join Wallace in the NXS race and John Hunter Nemechek and Jennifer Jo Cobb will represent the Turtles brand in the truck race.

Watch this video on the announcement: