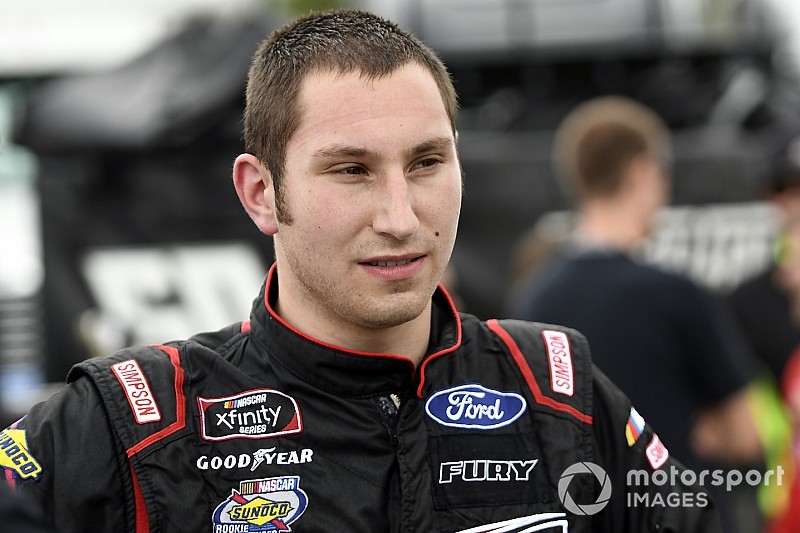 After thinking his final race of the season was in Charlotte, Kaz Grala secures a new partner to compete in NASCAR Xfinity Series season finale at Homestead.

Grala, who started the season with JGL Racing before team owner James Whitener was forced to cease operations due to health issues, will finish the season driving his 12th race with Fury Race Cars.

Grala will compete in the final race of 2018 thanks to new partner Hot Scream, The Spicy Ice Cream, which is on the hood of his No. 61 Ford this weekend.

“When we raced at Charlotte, we gave it our all, thinking it might be our last race of the season; we wanted to finish strong,” said Grala, who finished eighth on the Charlotte Roval. “We got in touch with Escape Brands and were able to put the deal together. We’re really happy to be racing this weekend.

“It’s important to race at Homestead-Miami Speedway to prepare for next season.”

Grala said after completing the deal, his team has worked hard to prepare his car for a good run at a track he enjoys.

“I was fortunate enough to get to test there last year in a truck and I really enjoyed the track and felt comfortable there during the Truck Series race,” said Grala. “HMS is my favorite 1.5-mile track and selfishly, I was hoping to get to race there because I like the track so much.”

The car Fury prepared for him is not a new one, but it has been completely redone for Grala to get on the track with this weekend.

“We’ve never raced this car before, we've only kept it as a backup so far, but we’ve had almost two months to work on it and get it ready to race,” said Grala. “We obviously have never raced an Xfinity Series car at Homestead, but we feel we have got the car ready and hope we went the right direction on the setup.

“The guys put a lot of sweat equity into this week's Ford Mustang, and I know they're really proud of it. We've got some of the hardest working guys in the sport, but having a piece they've worked so hard on ups everyone's game that tiny bit more."

New partner Hot Scream is produced by Escape Brands, a unique company with a focus on creating and developing cutting edge products that are currently just "ideas" and successfully bringing them to market at the highest possible quality.   It’s currently available in Connecticut and Rhode Island, with planned national distribution slated to begin in 2019.

“We’re very excited to be joining Kaz Grala and Fury at Homestead and it is our hope that this is just the beginning of our partnership together,” said Escape Brands President Jeff Russitano.

For Grala, he’s ready to finish the season strong and look ahead to 2019.

“This weekend is so important for us. It's Ford Championship Weekend and our last chance to make an impression this year,” he said. “We want to score another strong finish this weekend and use it as a springboard to build things out for our 2019 season and beyond.”