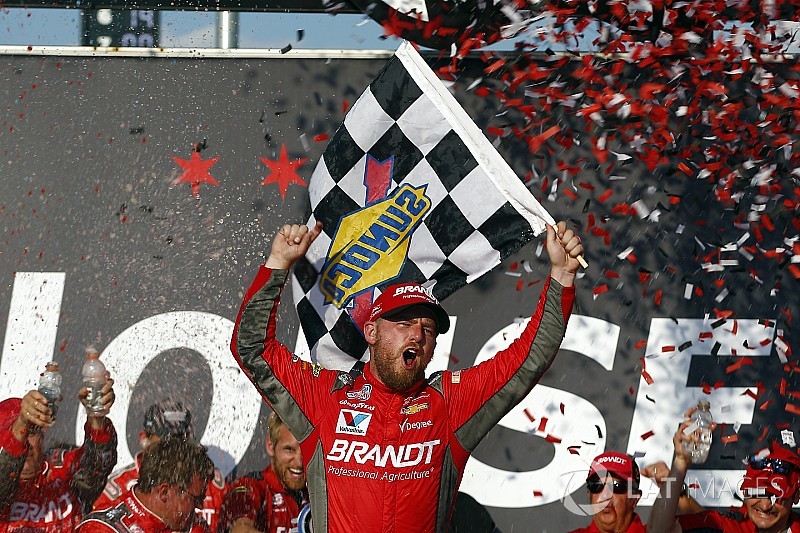 Two great restarts by Justin Allgaier provided a victory that will launch him into the 2017 NASCAR Xfinity Series playoffs in style.

Allgaier got a big jump on Erik Jones on a restart with seven of 200 laps remaining and held off Kyle Larson to win Saturday’s TheHouse.com 300 at Chicagoland Speedway.

Jones appeared to be in position to challenge Allgaier for the win but was black-flagged by NASCAR for a restart violation.

“I wanted those (playoff points) really bad,” Allgaier said in Victory Lane. “After practice I didn’t think we had the best car but these guys persevered throughout the course of the day. I didn’t know if we’d had a shot (at the win), I thought maybe a top-five but we had great late-race restarts.”

Allgaier took the lead for the first time with a three-wide move on a restart with 15 to go, diving to the low lane and sliding up to the front.

“T.J. (Majors, his spotter) was doing a great job of letting me know when they were leaving,” Allgaier said of the restart. “Elliott (Sadler) gave me a big shove and that allowed me to get by Erik (Jones).

“To win at my home race track, to get my second win here, nothing could be sweeter.”

The win was Allgaier’s second this season and fifth of his career.

Jones took the lead on the restart after Stage 1 and never looked back on his way to dominating all 45 laps to claim the Stage 2 victory.

Unlike the first stage, when Jones built a more than two-second lead only to see it disappear late in the run, Jones remained dominant, finishing more than 2.1-seconds ahead of second-place Custer.

During pit stops after the conclusion of the stage, Jones was first off pit road, followed by Custer and Blaney. However, both Jones and Blaney were penalized by NASCAR for speeding on pit road, sending both to the rear of the field on the restart.

Custer took over the lead on the restart on Lap 97.

Byron, who went to the garage in Stage 1 for a transmission change, made it back on the track in Stage 2 but was running 19 laps down.

Larson hit the wall while trying to chase down Jones but Jones came away with the Stage 1 victory.

Larson had made up almost all of a 2.5-second deficit before the conclusion of the first 45-lap segment but hit the wall, which appeared to slow his momentum.

“I like racing with the Cup guys, I think they make you better,” Custer said during the break.

One of this season’s title contenders, Byron, was forced to the garage after 29 laps when he developed a problem in the transmission of his No. 9 JR Motorsports Chevrolet.

Brendan Gaughan on his future: "I will never be done racing"