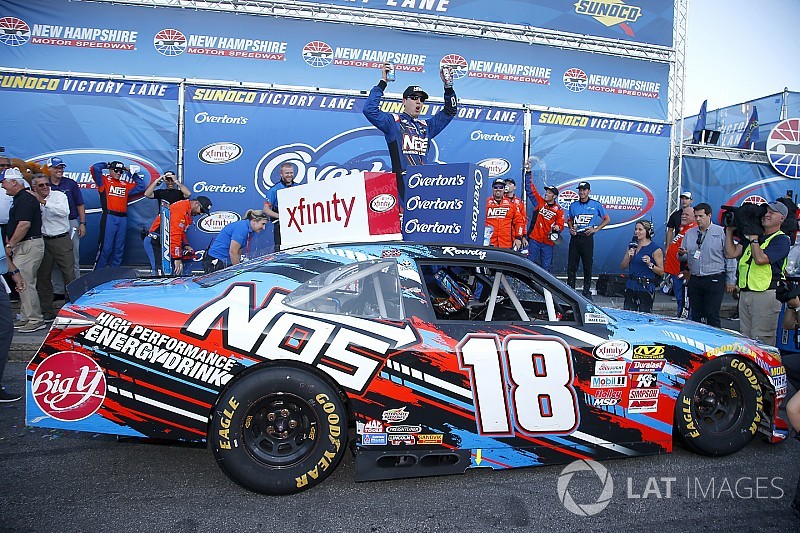 It’s no surprise Kyle Busch was part of another record run in the NASCAR Xfinity Series.

Busch moved into the lead with less than 30 of 200 laps remaining in Saturday’s Overton’s 200 when previous leader Brad Keselowski was penalized for removing equipment from his pit stall during a green-flag stop.

He had little difficulty from there holding off Joe Gibbs Racing teammate, Ryan Preece, to earn his sixth series win at New Hampshire Motor Speedway.

The win is Busch’s 89th of his career and third this season. He also extends New Hampshire’s record of now six consecutive races of the pole winner winning the race. Busch has been a part of three of those victories in the streak.

“You can’t always count on the fastest car winning the race, I guess,” Busch said of Keselowski’s penalty. “But you can count on teamwork. We got it done today. My guys did a great job in the pits.

“We were able to go here and contend with him. We were able to put the pressure on them. We kept close enough that I knew when they pit – they pit right after us – they were probably in a hurry because they knew we would have a lap on new tires on them.”

Busch said he got nervous as final laps ticked off that a caution would bunch the field a final time.

“The race played out and we got green all the way to the end,” he said. “I just tried to save what I could just in case of that late caution to race those guys behind us.”

Keselowski moved into the lead on Lap 71 and held off Busch to capture the Stage 2 victory.

“I think my car’s pretty good. I feel like with track position we’ll have a good chance at it,” Byron said over his radio during the break.

Larson began the Stage in the lead but Preece quickly ran him down to take his first lead over the race on Lap 52. Two laps later, Busch moved out front only to see Keselowski run him down on Lap 71.

With less than 10 laps remaining in the second Stage, championship contender Justin Allgaier was forced to take his No. 7 Chevrolet to the garage to repair transmission issues.

“I have no fourth gear,” he said over his radio. “It’s neutral when I’m in fourth gear.”

Larson charged to the lead on Lap 41 and held off a fast-approaching Preece to claim the Stage 1 victory.

The first Stage was interrupted by a 54-minute rain delay. The rain brought out a red flag on Lap 31 with Keselowski in the lead, followed by Busch, Larson, Preece and Matt Tifft.

Keselowski and Busch conducted a spirited race for the lead in the opening laps of the race, with each taking a turn out front.

“Everything has changed,” Keselowski said during the race stoppage. “It’s a bit being on a dirt track – you just have to keep searching to find the right groove. The track wasn’t anything like this in practice.”

Five things to watch in the New Hampshire Xfinity race