In an effort to reduce costs to teams, NASCAR will implement new pit stop procedures at the standalone races in both the Xfinity and Gander RV& Outdoors Truck series this season.

The procedures will be used for Xfinity Series races at Mid-Ohio Sports Car Course, Iowa Speedway and Road America.

In the Truck Series, the new procedures will be used at Iowa, World Wide Technology Raceway and Canadian Tire Motorsport Park. 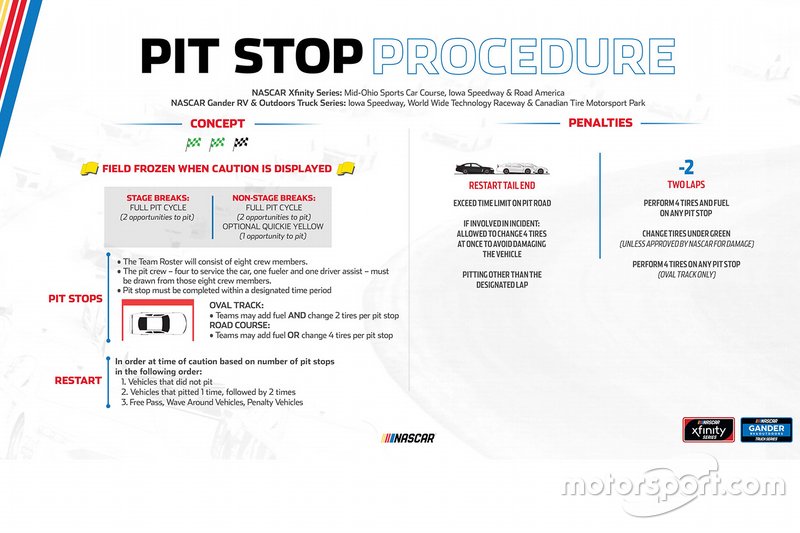 Highlights of the new rules:

The restart lineups following caution periods will consist of cars that did not pit, cars that pit once, cars that pit twice then followed by free pass, wave-around and cars under penalty.

“The reason we selected the events that we did is that they are standalone events. The standalone events for the Truck and Xfinity that aren’t with Cup present challenges for the teams from a logistical end on doing pit stops,” said Eric Peterson, the Xfinity Series’ technical manager.

“This is a way to alleviate the burden the teams have when performing pit stops at races that are not companion events to the Cup series. The Truck and Xfinity teams share the same issues at those events.”

Peterson said NASCAR hopes the procedures will help create different tire strategies in these events and level the playing field on pit road, which can see a huge disparity in resources just from the front of the field to mid-pack.

“If we have had it where they could do whatever they wanted on every pit stop than it would not allow us the opportunity to get different restart scenarios based on what each team elected to do such as a decision regarding two tires or four tires on an oval track,” he said.

Since NASCAR hopes to get away from teams having to make green-flag pit stops in these races, the lengths of stages will be adjusted from what they were in 2019.

Exceeding the time limit on pit road, pitting immediately after an accident and pitting other than the designated lap will result in a penalty of having to restart from the rear of the field.

A two-lap penalty will be assessed to any team that changes tires under green (without NASCAR permission), performs a four-tire pit stop on an oval track or takes four tires and changes fuel on any stop.

Ryan Pemberton, the director of competition at JR Motorsports, said lowering costs was part of the reason teams supported the changes but also because of how the rules should help level the playing field.

“It will mix it up, giving people the opportunity on pit road that don’t normally have that opportunity,” he said. “If you take a 15th place car, one take one of those guys back there that is having a good day, and it’s hard to have a successful day due to their pit crew compared to some of the others.

“From a crew chief pit point of view, it puts more people in play (in the race). It should broaden the competition of how many guys run in the top-10 on a weekly basis.”