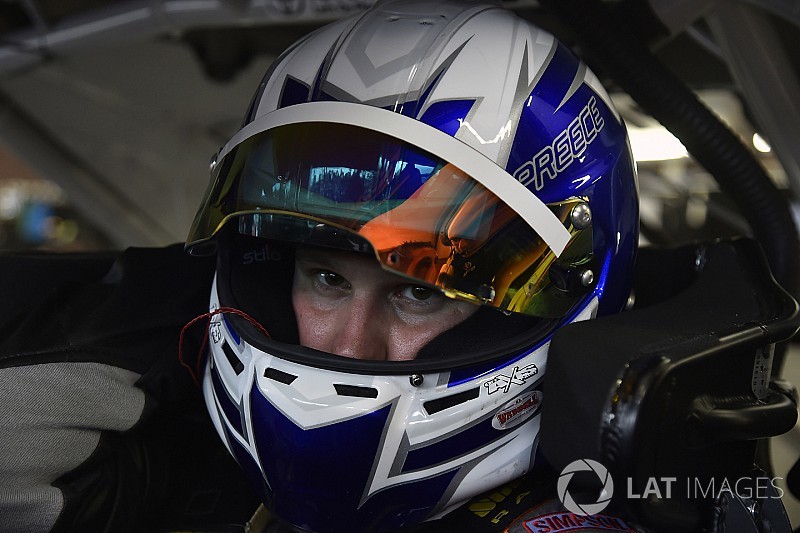 Preece spent last year living in his fellow New Englander’s garage in North Carolina while running the NXS tour with Johnny Davis and working on his Modified program in his spare time.

A once in a lifetime opportunity

The advice paid off. Desouza, who oversees JGR's Xfinity program, returned Preece's call that night. In Preece's first start with JGR, he scored a career-best result at his home track — New Hampshire Motor Speedway. Only winner Kyle Busch finished ahead of him.

“I wish I could show everybody the emotion I feel right now, but I’m not going to,” Preece told Motorsport.com following the Overton’s 200 and finishing second in the 100-lap Whelen Modified race earlier on Saturday. “I work really hard on the modified, getting everything so I can win races and putting myself into a position so people know I can be a winner. My mother and father sacrificed so much for me growing up — and my wife.

The 26-year-old Berlin, Connecticut native is a former NASCAR Next driver who started in the Modified ranks a decade ago. Over the last four seasons, Preece has made 37 starts for a variety of teams. But this weekend, Preece finally received the break he had hoped for with top-tier JGR and crew chief Chris Gabehart.

After winning the Modified All-Star race on Friday, Preece won the pole in the second Modified race and finished second on Saturday before the NXS event. He started sixth in the Xfinity race. A two-tire pit stop on his last round of service helped the driver of the No. 20 car maintain the necessary track position to stay with the front pack.

And Preece’s experience around the Magic Mile proved to be invaluable.

“I’m fortunate enough to have over 2,000 laps here,” Preece said. “It’s my home track. I’ve been pretty good at adapting from car to car — also iRacing some and watching some on-car videos.

“Joe Gibbs Racing definitely provided me with everything I needed to be as prepared as I could be.”

Still, Preece made the most of the opportunity. As the crew chief on his modified cars, he has a good handle on set up. Preece also used one of Gibbs' best resources — Kyle Busch — to get a handle on the Xfinity cars as he bounced between the NXS garage and his Modifieds and during the breaks in the race.

“I was talking to Kyle in practice and during the first and second session, I was shocked,” Preece said. “He’s a Cup guy, but he’s very in-tune with his car. If you want to be that next level driver, you have to get to that point. That’s what Richie Evans (a NASCAR Hall of Famer from the Modified ranks) and guys like that did back in the day.

“I want to work on these cars. I want to get myself better because if I know what we’re doing, it’s only going to help if I can dissect where it’s causing our issues. Somebody like me, I’ve just been waiting for this opportunity.”

Preece’s next opportunity with JGR will come at Iowa Speedway in two weeks. Although he won’t have Busch at the track, the former Cup champ is only a phone call away. After racing with Preece at Loudon, Busch thought his teammate did an excellent job.

“He just ran a good, smart race,” Busch said. “He had a restart there before the rain came, right? No, after the rain and he got a few positions on us there and did a really good job getting through the traffic and then was ahead of us there before that break came and, you know, just from what I could see just ran a smooth race and did a good job and kept his car under him and once I got by him, I passed him for the lead. But he was keeping pace.