Marcos Ambrose drove his No. 9 Richard Petty Motorsports Ford from the back to the front on Saturday in Montreal to claim the win in the NAPA Auto Parts 200 NASCAR Nationwide Series race at Circuit Gilles-Villeneuve.

“I didn’t lead the most laps here today, but I led the most important one -- the last one,” Ambrose said in victory lane.

When Marcos got spun out by the No. 22, he was determined.

French Canadian Alex Tagliani showed the home country fans a runner-up finish in the No. 12 Penske Racing Dodge, and Michael McDowell drove the No. 18 Joe Gibbs Racing Toyota to a third-place finish.

“We decided to go with a car that was good on the long run,” Tagliani said. “All these restarts were tough.”

Ambrose, not having been on hand to qualify his car on Friday, started the race in the back. As Ambrose was making his way toward the front, pole-sitter Jacques Villeneuve, son of the track’s namesake, Gilles Villeneuve, dominated the race early. Villeneuve led much of the first half of the race, except for when the field cycled through green-flag pit stops.

Villeneuve’s dominance ended, though, when he ran off the race track on a restart with 30 laps to go in the 74-lap race. As he made his way back onto the track, he made contact with Ambrose sending him spinning. Ambrose retaliated later that same lap, spinning Villeneuve.

Ron Fellows then claimed the lead in the No. 5 JR Motorsports Chevrolet, with Tagliani close behind in the second position. Tagliani got by Fellows for the top spot with 28 laps to go. Fellows soon fell back to third when he was passed by Robby Gordon in the No. 77 Robby Gordon Motorsports Dodge.

A caution came out with 18 laps to go, giving drivers who had yet to make their final pit stops and an opportunity to take enough fuel to make it the rest of the way. Fellows, short on fuel, stayed out as his No. 5 team hoped rain would hit the track prior to the completion of the scheduled distance.

The rain waited until after the race to arrive, and Fellows had to pit with 15 laps to go. Tagliani inherited the lead. 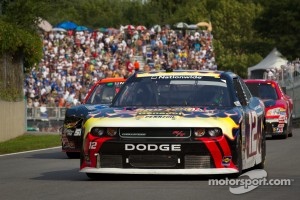 After a caution with 18 laps to go, Ambrose was outside the top-10 but gained several spots on the restart and made his way back up to third with 13 laps to go. Another caution came out for debris as Ambrose raced in the third spot, creating a restart with Tagliani and McDowell on the front row and Ambrose and Justin Allgaier in the No. 31 Turner Motorsports Chevrolet in row two.

Ambrose took the lead on the restart and began to pull away. His cushion vanished, though, when Gordon made contact with Tagliani, an act of retaliation for earlier contact between the two. Gordon was the one who suffered most from the move, as the contact damaged the radiator and oil cooler on his car.

“We beat ourselves,” Gordon said.

That final caution set the race up for a three-lap sprint to the finish with Ambrose and McDowell restarting first and second. Tagliani got by McDowell on the restart to assume the second spot. McDowell fell back to fourth when Steve Wallace, in the No. 66 Rusty Wallace Racing Toyota, took third away from him. McDowell got back by Wallace in the final two laps to retake third. Wallace ended up finishing fourth.

J.R. Fitzpatrick drove the No. 67 Go Canada Racing Ford to a fifth-place finish to round out the top-five.