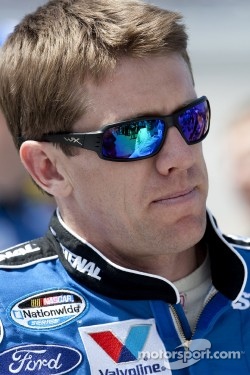 HOW DID EVERYTHING GO OUT THERE TODAY? “Yeah, they were trying to convince me that I need to really focus on my Cup effort next week. That is a unique battle we are having, it is fun. Congratulations to Sam (Hornish), that is huge to be able to run that well. He has showed a lot of poise there and a lot of guts there to run the last few laps there. We are just having fun and racing hard. Brad (Keselowski) and I were racing hard and having a good race. I thought it was pretty good. I think we learned a little bit for tomorrow. It should be a fun race.”

WHAT DID YOU LEARN FOR TOMORROW? “It did widen out a little more than I thought it was going to so that was interesting. You can definitely run two-wide around the whole race track. That was kind of news to me. I didn’t expect that. I learned a couple things about different spots on the track, where there is grip and stuff like that. I still think tomorrow is going to be so much different than today. The cars are different and the weather looks to be different. I think it will be its own race and the strategies that worked today may not work tomorrow as well.”

DO YOU THINK IT WILL BE A GOOD RACE? “I do. I think the only thing that will make it difficult is that it is truly hard to pass. Once you get four or five car lengths back if it is a short run it is hard to pass. After 50 or 60 laps you might see some guys really dicing it up.”

WHAT ABOUT THE GUYS DIVING DOWN ON THE APRON? “It is different. I think it is exciting to see. I didn’t do it but I saw other guys doing it. There were a lot of sparks flying and dust flying and all of that. It is definitely interesting.

DO YOU THINK WE WILL HAVE A SECOND GROOVE TOMORROW? IT LOOKS LIKE IT MIGHT RAIN TOMORROW MORNING. “I think we will. Brad utilized the heck out of the second groove there in three and four and I saw a couple guys doing that. I believe that if we go the full distance it really doesn’t matter how much rubber gets washed away. I don’t think they are forecasting much rain. I think they said less than a tenth of an inch. Even if it does rain it probably won’t be a hard rain and I think the groove will stay nice and wide.”

YOU SAID THERE ARE TWO GROOVES BUT IT IS HARD TO PASS. THAT SEEMS TO BE A LITTLE CONTRADICTION OR MAYBE NOT? “Well, it is a pretty narrow two grooves and aero is a big enough factor here that guys can get loose if you are under someone and the track is a little treacherous. It is hard to pass. I think what I was saying about the difficulty in passing was that once you line up and you get in a line, if the guy in front of you is running the same groove as you it is a little tough when you are so aero dependant here and everyone is so closely matched to run him down and work him over. You need him to struggle a little bit.”