Kyle Busch claimed the pole for the Food City 250 NASCAR Nationwide Series race on Friday in his No. 18 Joe Gibbs Racing Toyota by making a lap around Bristol Motor Speedway in 15.979 seconds.

“I feel like this is a place that I’ve done a pretty good job at being able to figure out,” Busch, who has won five of the six most recent NASCAR national level races at Bristol, said. “It’s just kind of come to me. I think a lot of it stems from running well at some other short tracks that I raced Super Late Models and stuff like that at -- Winchester, Slinger and Salem -- those places.”

... a lot of it stems from running well at some other short tracks...

Busch’s JGR teammate, Joey Logano in the No. 20 Toyota, starts alongside Busch on the front row in the second spot after posting a lap time of 15.997 seconds. Busch and Logano were the only two drivers to turn in sub-16-second laps during the qualifying session.

Elliott Sadler starts third in the No. 2 Kevin Harvick Inc. Chevrolet after posting a 16.015-second lap.

Four cars made qualifying attempts after Busch’s pole-winning lap, but none were able to knock him down the scoring pylon. The only driver of those four who came close was Sadler. He went out last by virtue of having the fastest car during the first practice session.

Three of those final four cars claimed spots inside the top-five. Kenny Wallace qualified fourth with a lap of 16.067 seconds in the No. 09 RAB Racing Toyota, and Jason Leffler took fifth with a 16.095-second lap in the No. 30 Turner Motorsports Chevrolet. The only driver of those final four who ended up outside the top-five was Trevor Bayne in the No. 16 Roush Fenway Racing Toyota. After posting a qualifying time of 16.114 seconds, Bayne took the seventh position on the starting grid. 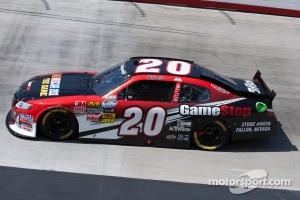 Bayne’s RFR teammate, Carl Edwards in the No. 60 Ford, qualified just ahead of his teammate. Edwards turned a lap at 16.106 seconds to take the sixth starting spot.