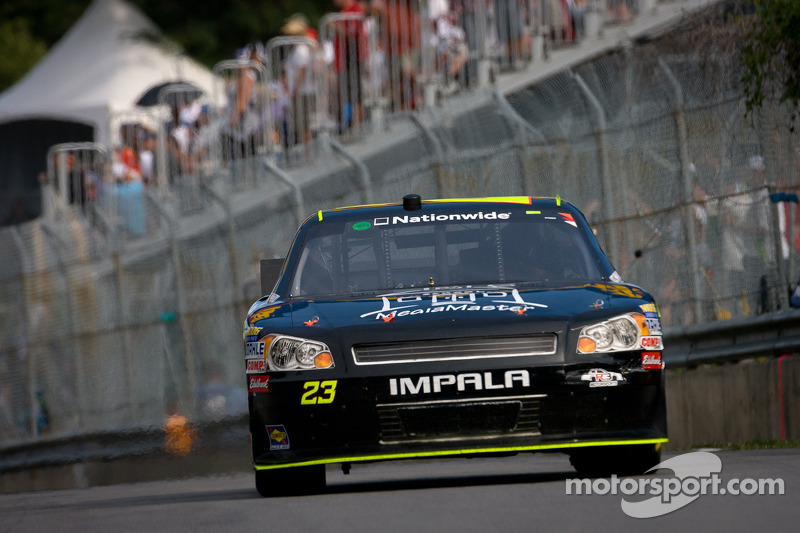 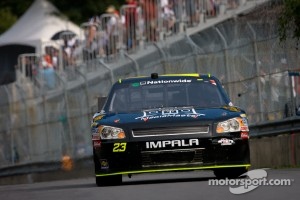 MONTREAL (August 20, 2011) – Alex “Kid” Kennedy and the No. 23 Media Master/St. Baldrick’s Chevrolet team of R3 Motorsports had nothing but optimism for Saturday’s race along the shores of the St. Lawrence Seaway.

After posting the 30th and 26th, respectively, times in the first and final practice sessions on Friday morning at the road course of Cirque Gilles Villeneuve, the Aztec, N.M. native backed that up by qualifying 26th on Friday afternoon.

When the 74-lap race started, Kennedy wasted little time finding his way to the front by vaulting up to 19th by lap five. From there, some lead lap cars started to take early, green-flag pit stops to ensure they wouldn’t be caught without fuel towards the end.

This helped the 19-year old “Kid” Kennedy as he quickly moved up higher in the running order, until he followed suit and hit pit road for tires and fuel on lap seven. Returning to action in 35th place, crew chief Walter Giles let the driver of the No. 23 Media Master Chevrolet know this was a perfect time to race smart because when the leaders all cycled through on pit stops, he would end up near the top-10.

As the race continued, Kennedy was running in 25th when the first caution waved on lap 14.

When other cars finally hit pit road for the first time and the field cycled through to restart on lap 18, Kennedy was now lined up in 14th place; just like Giles predicted. While running 13th on lap 19, Kennedy was hit from behind and turned into the grassy area of the hairpin turn. This dropped him all the way back to 34th place.

The car was good to go, so Kennedy got back up on the wheel and did what he does best by picking off positions one-by-one to move up the scoring pylon. Laps 22 through 25 was where he started his charge to redemption by picking up six positions to 28th place.

Green flag stops again started on lap 27 and this allowed Kennedy to move back up into the top-20 running positions by lap 30. This was the time Giles had scheduled a stop for Kennedy to pack the car full of fuel and take on new tires, returning him to the race in 34th place, right in front of the leader.

The second caution flew on lap 40 with Kennedy in 27th place. Giles called Kennedy to come to pit road for as much fuel as possible and four new tires. This would leave the No. 23 Media Master Chevrolet team needing just one more fuel stop to go the distance.

Kennedy was running was 19th again when the third caution waved on lap 52.

This was the final stop Giles was looking for to take only fuel while others took fuel AND tires. Kennedy was able to pick up five positions on pit road to restart in 16th place on lap 55.

During the lap, while getting ready to course a turn, the back end of the No. 23 was lifted up from behind by another car which, in turn, sent Kennedy into the back of another car, right front first. After making contact with the car in front, the No. 23 then slid off into the gravel with heavy damage to the right front fender. This brought out the fourth caution so a tow truck could pull him out to drive the car to pit road for repairs.

It took them two laps, but the No. 23 team returned to action in 34th place for the lap 59 restart. Not wanting to damage the car or put the driver in harm’s way, the team agreed to see how things played out during the ensuing laps.

With 14 laps remaining, Kennedy radioed in that something broke in the front and it was quickly discovered a right front flat was the problem as he limped the car down pit road. A quick tire change, a check of the steering and a mandated stop by NASCAR to make sure all was okay on the No. 23 car showed it was still good to compete.

Now running 34th three laps down, Kennedy was going to be dependent upon other drivers to fall out to pick up spots. And, during the final 10 circuits, another caution with seven to go took place. Kennedy was forced to bring the No. 23 into the garage for more repairs on the back end by NASCAR officials.

When the race restarted on lap 69, Kennedy and the R3 Motorsports team were still in the garage making repairs. However, they were told by NASCAR officials the dragging bar wasn’t fixed when it should have been and they were posted out of the race.

Their undeserved finish of 33rd, after running lap times within the top-10 runners for much of the race, doesn’t show how well Kennedy drove and how the car handled through the turns of this track.

Alex Kennedy Quotes: “I hate that this race ended the way it did for this No. 23 Media Master team of R3 Motorsports. Once that green flag fell, we just started marching forward and were in the top-20 within five laps.

“We ran right there for quite awhile and then fell back to follow the pit strategy Walter (Giles, crew chief) had laid out before the race. We had some cautions go our way and we were right where we wanted with less than 20 laps left.

“That wreck we were in tore up the right front, but the team got it fixed enough to get us back out to try to finish the race. The right front tire went flat, we came in for that and then NASCAR said the bar in back was dragging on the track too much and we couldn’t go back out to finish.

“Not a great way to end the weekend after working so hard to get where we were, especially running lap times in the top-10 for awhile. Thanks to everyone at R3 Motorsports, Media Master and St. Baldrick’s who made this race possible. I can’t wait to get back here again, or any track, to race again.”