Busch started 41st after having to go to a back-up car following an accident during qualifying. 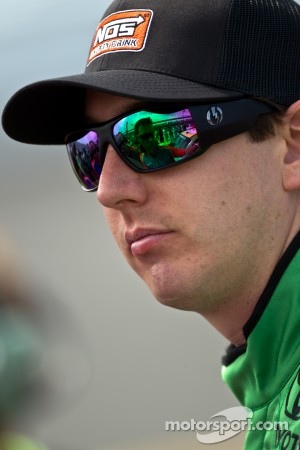 How much fuel did you have at the finish? “Didn’t have much left. Came across with three pounds of pressure, so I imagine it’s out. But, we still made it back to pit road. I can’t say enough about these guys. I really put us behind. This NOS Energy Drink Camry was good tonight, just it wasn’t the primary car. So, it wasn’t as good as we would have liked it to have been -- about a fifth or sixth-place car. It’s good to bring it home ‘P-3’ and have a good night. We’ll take it. We’re still lacking something somewhere and we’ll hopefully figure it out.”

How hard was it to get the back-up race car ready? “Great guys. The guys do such a great job. I screwed up qualifying today and ‘fenced’ the NOS Energy Drink Camry. But, we had another one in the truck. The guys did a great job putting it together and getting it ready and just in time. Probably didn’t have as much time as they would have liked to have spent on it, but all in all we gave it the best we had. Probably was going to be about a fifth or sixth before all the fuel exchanges and everything going on there at the end. Thank all the guys. They did a great one for me tonight. Wish we could get a little bit better. Maybe we will and try to challenge for some more wins here soon.”

How was your race tonight? “It was a good run for us considering what all happened today. The guys did a great job putting our NOS Energy Drink Camry -- I guess getting the back-up out, not back together -- and getting all the changes made to it and putting everything in it. We started pretty far behind, but we made up a lot of ground tonight -- really good to see. Great finish for us with a third. We probably were only about a fifth or sixth-place tonight. So, we are still working on things trying to get better. Trying to get to where we can challenge for a win with the Fords, and the 22 (Brad Keselowski) was real fast tonight and (Kevin) Harvick was too”

Were you close to running out of fuel? “We were pretty close. We come across the line and we lost fuel pressure. So, I imagine there wasn’t much left. It was probably going to run out in one more lap.”

How was the track tonight? “It was a little rough for us. I was loose all night getting in the corner and we didn’t have the car that I wanted to run in the top-10. Scott Zipadelli (crew chief), he just kept adjusting, adjusting and finally towards the end he made a real big adjustment. When he made that real big adjustment it lasted longer and it just seemed like everybody was struggling getting in. We were loose all night getting into both corners. We used a little fuel strategy at the end of the race when we come in and topped it off and it took us to the end.”

How did strategy improve your finish tonight? “We’re sitting running around 15th and I said, ‘What position are we?’ Scott (Zipadelli, crew chief) said we’re 20th and I said, ‘How many cars are on the lead lap?’ Twenty three cars on the lead lap we decided to come in and, you know, cap that Toyota Camry off and we got to about 15th, and then we started saving a little bit of fuel. So it was a good run for this UNOH Toyota Camry.”

How was your race? “We got a good finish for where we ran all day. To get another top-10 -- but we did it on fuel mileage. It’s not how you want to do it, but I guess if your car is not good enough you have to do whatever you can to get the best finish you can.”

What happened on the final lap? “We ran out of gas. We started the race right where we needed to be and we got a little bit closer We’ve got to find more speed in our cars. Our cars aren’t fast enough. It seemed like me and Kyle (Busch) were fourth and fifth-place cars, pretty much. I don’t think we were going to try and make something happen, but it was just try to make it on fuel. I tried saving the best I can, but I just didn’t quite make it -- just one lap short.”

Did you think you had enough fuel? “I was pretty sure I was going to make it and then I looked at the fuel pressure and thought, ‘Ugh, it’s not going to be good,’ and then I ran out, so that was that.”

How was tonight’s race?” “Long, unfortunately. We didn’t have a very good car. We struggled. It looks like we left a wheel loose and had to come down pit road under green. I fought the rest of the time trying to get our lap back. All in all, it’s just disappointing. They guys work really hard. It didn’t work out.”