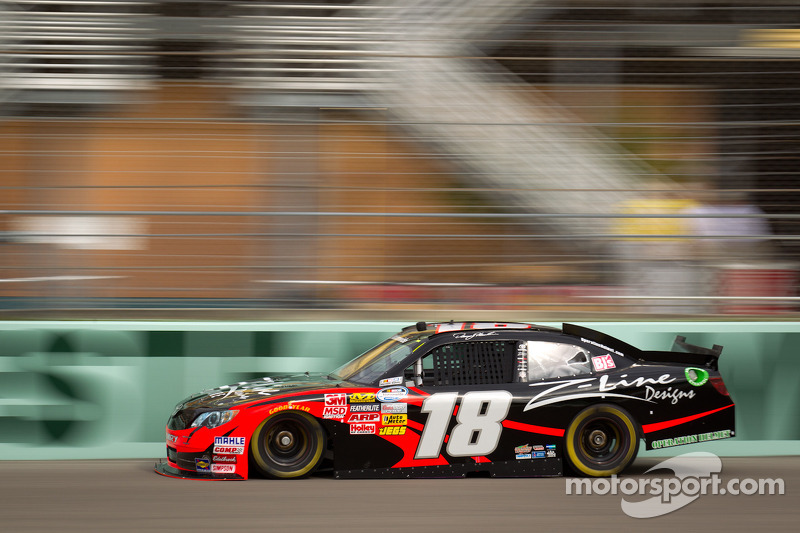 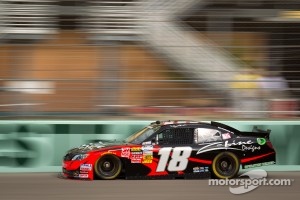 Camry drivers earned 10 wins and five pole positions during the 2011 season. Toyota has recorded 64 victories and 54 poles since joining the series in 2007.

How was your race? “We struggled with our race car all day long and we had very limited practice time with the rain. Just didn’t have it today. It looked like all of the Roush cars were extremely strong. We just didn’t have the car that could hang with them in the end."

How happy were you with your pit crew in tonight’s race? “Yeah, this pit crew gave us a shot at it, no doubt about it. They were just an amazing pit crew. When you can gain us three spots and a clutch position like that, they deserve a lot of credit. They’re the ones who gave us a shot at it anyway."

How are you feeling going into the Sprint Cup race on Sunday after two races so far this weekend? “Good. I feel like we’re making strides. We just have got to keep digging. We’re a little off right now. As an organization I feel like we need to be better. Obviously, we’ve got a ways to go, but just have to thank everyone from ZLine Designs for putting me in the car and obviously this whole 18 team for putting me in. Jim and Monica (Sexton, ZLine Design owners) have done a lot for this program. FedEx, Toyota, Coca-Cola, Gillette and Wiley X. Couldn’t do it without everyone."

Did you think you had a chance to beat the 60 car tonight to give Joe Gibbs Racing the owner’s championship? “Carl (Edwards) had an extremely strong car. It looked like all of their cars were really good today. We just struggled with our Z-Line Designs Toyota. We felt like for the most part we had a fifth to seventh-place car for most of the day. It’s kind of where we ended up. The pit crew did an amazing job at least giving me a shot at it there at the end. We just couldn’t hang on. We just didn’t have the car for it today."

Were you unhappy with the way your car handled during the race? “I wish we had some more practice time. We were banking on that second practice. We just didn’t get enough track time with this car this weekend. We struggled. We struggled all day and just could not get the speed out of it that we needed. We ended up fifth."

Are you happy finishing the year with a top-10? “I’ll take a top-10 to end the year. We fought hard ever since Daytona. We didn’t have the performance or the results that we wanted until about the middle of the year. This team -- we flipped the switch. Kevin (Kidd, crew chief) and I really got on the same page and we started having good runs. We were a pretty good team the second half of the year. Definitely performed the last quarter of the year with some top-five finishes, and got a pole at Chicago. We’re going to focus really on the last part of the year and continue to build and do the things that we started doing at the middle of the year that will make us better to come back in 2012 and be even stronger. I don’t see any reason why this team can’t make the progress through the off-season and come back with the yellow and black Dollar General car and have a team good enough to run for the championship. I feel like Kevin Kidd (crew chief) and I have a relationship that is on really good terms. We’re really communicating well. We’re going to continue to work through the off-season just as hard -- if not harder -- than we worked all year. Come back and be a really strong team."

How would you look back at the 2011 season? “Someone asked me the grade that I’d give this season -- and I’d probably say a C+ -- just because we started off so slow and behind. We made up a lot of ground throughout the summer and fell back behind it, and then made more gains. We know there are places we can make a lot of improvement in our program -- mile-and-a-half tracks especially. So, that’s something we’re really going to work on in the off-season and come back on board with Rusty Wallace Racing and the No. 62. Hopefully, some more partners will come on board and help Steven’s (Wallace) car a little bit and that way can have a strong two car effort after the off-season.”