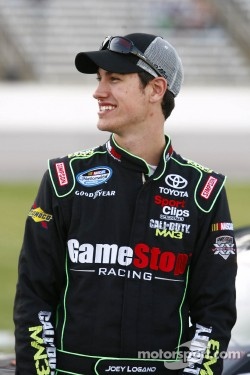 Truex was also the highest finishing rookie in the race.

Joe Gibbs Racing’s No. 18 Camry team currently leads the unofficial NNS owner point standings by one point after 33 of 34 races.

How was your race car today? “We had a fast car. We had a pretty good GameStop Toyota. We just didn’t take off during restarts. The first 10 laps we were just junk -- and we’d lose all the track position we had -- and then we’d get going and be fast. It just took us too long. Once we got going we were all about the same speed too anyway. That’s awesome for Sam (Hornish). He’s a great guy. Awesome to see him win. Much rather have the old GameStop Toyota in victory lane. I felt like I had a car that can do it. Just had to work on our front side speed."

How much did the track change during the race? “Not as much as I thought, but it did change some for sure. Actually, the top side over in (turns) three and four actually starting working it self in pretty good. Just hard to figure out what you think the track is going to go in a certain direction -- you adjust to it towards that and then it doesn’t do that. Then it’s really just an educated guessing game out there. It just didn’t change as much as I thought it would."

Did you take advantage of the apron? “Yeah. That’s a good way to pass cars. It’s really weird though. You go down there and I swear it about knocks your helmet off. It’s such a hard hit when you go down there. It’s such a shorter distance. You can drive right underneath a car doing it that way. It’s kind of weird. I don’t know if they’ll change anything about that to stop us from doing that. That’s one way we were passing cars, for sure. It was really weird."

Why were drivers using the apron? “It’s such a shorter distance. It feels like you’re cutting a quarter-mile off the track doing it that way."

Do you expect to see drivers using the apron Sunday? “Probably be a little bit harder in a Cup car, but I think people will do it."

Did you learn anything that will help you Sunday? “I learned quite a bit. This is one of those races that you’re glad you’re running double duty."

How was your race? “It was good. I think we had a better car than where we finished. We started off there and just dropped back a little bit. Our car was too loose at the start of the run. We knew that was going to happen on the green flag. The track was just not in good shape at all. Pretty much everyone on the outside went backwards. We just worked on it and got it pretty good there on the long run, we were just a little too loose on the start of a run to stay up there with those guys. After about five laps we’d get really good, but those five laps we’d lose spots just because we were so free. It was a good day I guess, can’t complain about an eight-place finish with all the wrecked cars we have out here, so I’m happy about it."

Did you use the dog leg to get around the track? “Yes, very useful. We weren’t sure about it coming here. You look at it and it looks like there was so much room. If those guys were racing in front of you and you drive way down there, you can just blow by all of them. I don’t know how NASCAR feels about it, but it’s a pretty good way to pass some cars."

What do you think about your chance to be series ‘Rookie of the Year’ this year? “I don’t know if this is enough to take the lead or win it or what. I gave it my best and we’ll see what happens."

How does it feel to be ‘Rookie of the Race’ in your final event of the year? “I wasn’t worried about it in the race, I knew we had a good car and I knew we had all six races I’ve been in this car. It was a crazy race to say the least. The way you could pass people in the dog leg and drive way down like that was wild. There were a few guys out there that tried to get respect and I guess I have to earn it being a rookie. It was a good race. I think we should have finished better, we probably adjusted out of it a little bit in the end. I had fun and hopefully we can get ‘Rookie of the Year’.

How was your race? “Eventful, we didn’t start off with a top-10 car. We were disappointed because we did have holes in practice, so I guess with the sun beating down on the track all day, we just kind of got behind a little bit and were really free for three-quarters of the race and then the last 50 laps we got the car happy enough to where I felt comfortable actually driving it hard. We were smart, we knew the car we had and we knew we couldn’t run up through the field. We let them make their mistakes and we’ll be ready to jump on it and we did and came out of Phoenix with a top-10."

What did you think of the new track after racing on it? “It’s pretty crazy. It’s just hard for the spotters to say ‘inside.’ Really, I did more just watching the mirror and trying to see how much track was between myself and the car in the inside because as far as he is inside, but he might be four car lengths down there. If they say ‘three-wide,’ you just really don’t know. I said to my spotter, ‘what they need to do is put a big patch of triangle grass out there to keep everybody from going down there’ just because this place is hard enough for spotters to spot where they do from the corner, they don’t need that added complication.”