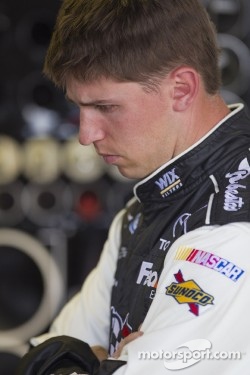 What happened on the final restart? “Yeah, we didn’t get the best restart there and those guys on the outside line really had an advantage and they were able to pull us and just took us that long to get back to them. Took a long time to get this car where I felt like I wanted it and at the end we had a car that could contend for a win and that’s all you can ask for."

What is it like jumping in a car for the first time on race day? “It was a tough day. It’s very tough to get into someone’s car. Any of these drivers that have been in someone else’s car at one moment or time during testing and it’s just -- when things don’t fit, you’re exactly right and we have such a different stature and size and everything like that and driving style, it’s hard to make it work. But, we worked through it and by the end of the day we had a car that was capable of winning. We’ll take that."

When did you find out you were going to race in today’s event? “This morning, you know last night, this morning it was -- we figured something was going on. I just got in the car this morning just in case and got fitted for it and that was it."

What is your reaction to NASCAR’s actions today? “It’s a tough spot. I think we’ve seen stuff like that. If you read my Twitter account, I think that what happened last night happened a lot last week and it’s happened all year, but obviously the stakes are a little higher when you have a championship contender and speeds are up and it’s under caution. All those things I think formulated into it and I feel like NASCAR felt probably a little pressure from fans and things like that to make a decision and they made what they thought was correct. It’s tough for everyone at Joe Gibbs Racing because I know that the whole No. 18 team works extremely hard to get to the position that they’re in and to have a chance at a good finishing points position kind of taken away at the end, it’s tough for them. It’s tough for everyone at Gibbs."

Will you think twice before dumping somebody in the future? “I don’t know really where the line is. Like I said, there’s not much different than what happened last week. There was a lot of incidents very, very similar that took guys out and things like that. I’m still -- I don’t know where the line is. It’s not going to be a defined line -- it’s going to be their judgment call and what they say goes. We’ve got to realize that if we make a decision, a bad decision and decide to retaliate it could be, our future could be in NASCAR’s hands. We have to realize that."

Would you race more Nationwide Series races this year if asked? “I’ll do whatever I need to do. Obviously running his truck last week and his car this week -- I'll do whatever it takes to fill in the gaps where need be. We’ll just go from here."

How will not having Kyle Busch in Sunday’s race affect you? “It changes the complexion for us because he’s one of the guys I use every weekend for information and help tune our race car. Obviously Michael (McDowell) is in a tough spot trying to just get in that race car and go racing and be competitive. We obviously rely a lot on the information that we get from our other two crew chiefs and drivers. With one kind of being a big variable now, you kind of have to take it with a grain of salt. We’ll have to figure things out and kind of do it on our own for the most part this week."

How was your race today? “Terrible. It sucked. We ran like crap. We were just sideways all day -- really loose no matter what we did. Tried to make it better and as we tightened it up, we just killed the aero platform, which takes overall grip away, so even balanced right we were still slow. It was frustrating."

How was your race today? “I thought we had just an okay day. We ran just top-10 most the day -- a little bit outside of it. We used pit stops to try to make our car better. We kind of went the wrong direction on one of them when we first put stickers on and we learned from it. We made some adjustment and I thought we were going to have a good day. Just so-so. (Elliott) Sadler moved up on us on the last pit stop and caved in our left front fender and we fell back a couple of positions and finished 12th, which should have been a top-10 day. Overall, just kind of nothing spectacular and nothing disastrous. Just had a day."

How was your race today? “It was a decent race. It wasn’t a bad race by any means. For my 520th start, you want to have a competitive race. You don’t want to embarrass yourself, so 13th was okay. You know we’re really working hard on staying seventh in the points racing Brian Scott and my nephew, Steven (Wallace). A lot of emotion was put in to that last restart to get my lap back. Took some chances and it worked out and 13th is okay. It’s not great, but it’s okay and move on to Phoenix now and end this year in the next couple of races."

How do you feel about breaking the NNS starts record with 520 starts? “Well, I’ve been consistent in all of my comments and I haven’t been ‘wishy-washy.’ I still am thankful for my 10 years in the Cup Series with 344 starts. I’m learning all these stats now. To have been able to make a living my whole life has been a dream come true. It’s no different than in the media center I see a lot of you here and I’ve seen y’all come and I’ve seen you go and I’ve very grateful to have come out of Arnold, Missouri and if you would have told me that you can make a living in NASCAR and that’s all you’re ever going to do -- I mean, I’ve made a living driving a race car my whole life and it looks like I will retire racing cars for a living. That’s perspective that I can put it into. I’m thrilled to death. I’m grateful to all the car owners that have given me rides and I’m really excited about today’s race. We’ve got a points battle going on for the seventh spot and it’s been like that my whole career, all types of little races."