MONTREAL, Quebec, Canada (August 20, 2011) – Jacques Villeneuve, driver of the No. 22 Discount Tire/Ruby Tuesday Dodge Challenger in the NASCAR Nationwide Series (NNS), led a good portion of the race before contact led to a 27th-place finish Saturday afternoon in the NAPA Auto Parts 200 at Circuit Gilles Villeneuve. The event marked the second NNS race of 2011 for Villeneuve in the Discount Tire/Ruby Tuesday Dodge Challenger as well as the much anticipated return to his hometown of Montreal.

On the restart with Marcos (Ambrose), I got caught sleeping.

Villeneuve started from the pole position after posting a qualifying time of 101.800 seconds or 95.800 miles per hour, during Friday evening’s qualifying session. The performance marked eighth time that the Discount Tire/Ruby Tuesday Dodge started in the top-five this season. It also marked the first one-two start for Penske Racing in 2011 as Villeneuve’s teammate, Alex Tagliani, qualified in the second position after posting a time of 101.935 seconds or 95.673 miles per hour.

As the green flag flew to start the race, Villeneuve quickly began to drive away from the rest of field. He had radioed to crew chief Todd Gordon that the Discount Tire/Ruby Tuesday Dodge was handling loose on the track but he knew the track conditions would change and that the car would tighten up as well. Behind the leader, the No. 38 car of Jason Leffler and the No. 12 machine driven by Tagliani began racing each other for the second position, which allowed Villeneuve to pull away and increase his lead to nine seconds.

Knowing that he had only completed three of the 74 scheduled laps, Villeneuve was taking it easy on his brakes to ensure that they would last for the entire race. On lap 8, Gordon called the No. 22 Discount Tire/Ruby Tuesday Dodge Challenger down pit road for a fuel only stop. Villeneuve returned to the track in the 17th position but he knew that the cars in front of him would have pit as well. When the caution flag was displayed on lap 15 due to a spin by the No. 81 of Maryeve Dufault, Villeneuve stayed out to gain track position and by the time the green flag flew on lap 18, he found himself in the lead again with Tagliani behind him. 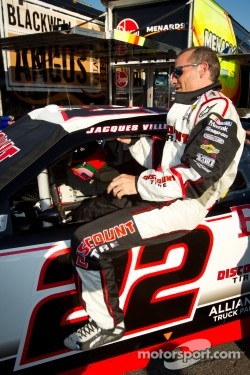 The No. 66 car driven by Steven Wallace began battling Villeneuve for the lead but Villeneuve’s road course skills prevailed and he was able to pull away and maintain the top position. As the race continued, Villeneuve was posting the fastest laps on the track and had continued to preserve his brakes. When the second caution flag of the race flew on lap 31, the No. 22 Dodge Challenger came down pit road to take on four fresh Goodyear tires and fuel. Villeneuve restarted the race in the fifth position but by lap 37 he had reclaimed the lead as the race reached its halfway point. As the field took the green flag on lap 40, teams up and down pit road started watching the weather radar due to a storm clouds approaching.

When the caution flag flew for the third time of the afternoon on lap 44, Villeneuve stayed out on track after visiting pit lane just five laps earlier. On the race restart, Villeneuve locked up the rear wheels going into the “Senna” hairpin turn and went off course. As he returned to the track, Villeneuve and the No. 22 car made contact with the No. 9 car of Marcos Ambrose. The contact caused heavy damage to the Discount Tire/Ruby Tuesday Dodge. Gordon called Villeneuve down pit road in order to assess the damage, change all four tires and fill the car full of fuel. As a result of the incident, the No. 22 Discount Tire/Ruby Tuesday Dodge Challenger had no power steering, which made the car difficult to turn in either direction.

The No. 22 crew got another chance to work on the car when the caution flag came out after the No. 30 car of Boris Said ran off the course and into the gravel in turn 10. The crew filled the car full of fuel and repaired the remaining damage to the front of the Dodge Challenger. At this point in the race, Villeneuve was scored in the 30th position, two laps down to the race leaders. With less than 10 laps remaining in the race, Villeneuve did all he could to improve his position and he moved up to 27th place at the checkered flag as Ambrose claimed victory.

“A tough deal today for the No. 22 Discount Tire/Ruby Tuesday Dodge Challenger,” said Villeneuve. “We had the fastest car out there today. I don’t think that anyone could come near our lap times. I spend the first part of the race just saving my brakes, I was actually driving slow. On the restart with Marcos (Ambrose), I got caught sleeping. Instead of leaning on him, I gave him too much room, ended up in the gray and lost control of the car. Our Dodge Challenger was very fast. It’s disappointing because it was exciting to drive a Penske Racing car and the crew did an amazing job preparing the car to be fast. I think we had the best car to win the race.” 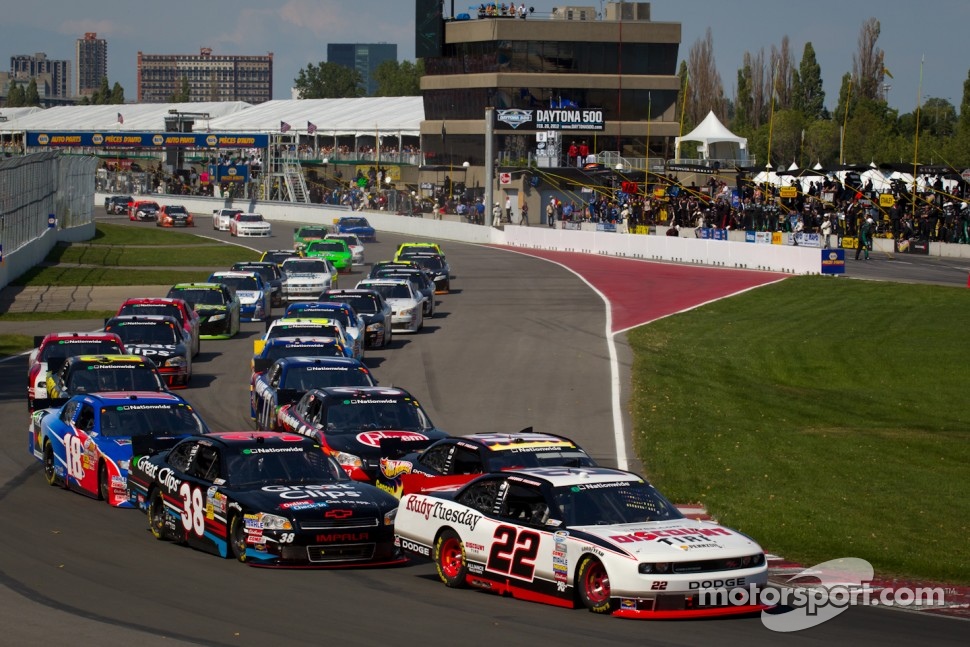 Noah Gragson to return to JR Motorsports Xfinity ride in 2022

Newgarden: IndyCar driver aggression over the edge at times