No. 60 team finishes 20th in Richmond

The team ran strong, cracking into the top-10, before a couple of late race restarts and contact with another competitor halted the team’s march to the front.

RICHMOND, Va. – Travis Pastrana and the No. 60 Roush Fenway Racing Ford Mustang finished 20th in Friday night’s NASCAR Nationwide Series (NNS) race at Richmond International Raceway. The team ran strong, cracking into the top-10, before a couple of late race restarts and contact with another competitor halted the team’s march to the front. 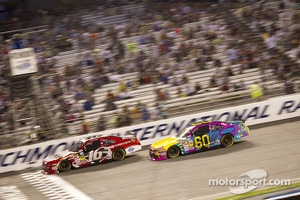 "Our car was really great on the long run,” said Pastrana. “Running from outside the top-20 and driving through the top-10 by halfway was my best drive to date.

Unfortunately, for the second week in a row, I took a car that could have been top-five and wasn't able to give my team the feedback we needed to better ourselves and contend when it mattered.

I will do my homework and try to make sure it doesn't happen again."

The NNS made its second trip to Richmond International Raceway, where Pastrana earned his career-best finish of ninth earlier in the season. The No. 60 Ford Mustang rolled off 22nd, and as the first green flag run progressed, Pastrana radioed to the crew that the car was better the longer he ran.

By the time the team made its first pit stop of the day, Pastrana had worked his way up to 14th. The team elected to take four tires and fuel as well as making air pressure and wedge adjustments.

Pastrana restarted 13th and continued to march his way forward, with a fast car and strong lap times. He was silent on the radio as he worked his way through the field. Crew Chief Chad Norris read off lap times, while Spotter Jason Hedlesky directed Pastrana through traffic.

The team visited pit road for the second time of the day on Lap 134, taking four tires and fuel. The pit crew made no adjustments, as Pastrana was happy with the handling of his Mustang. Pastrana restarted 10th, but fell back to 14th after the restart.

When the caution flag waved on Lap 172, Pastrana radioed that the car was just starting to come to him. Norris called Pastrana down pit road the following lap for four tires and fuel, and, for the second stop in a row, no adjustments.

The pit crew gained two spots, putting the No. 60 in 11th for the restart. Tight racing on the following restart resulted in contact to the No. 60 and dropped Pastrana back to 19th. When the caution was displayed on Lap 229, Pastrana radioed that the handling on the car was no longer to his liking. The car was loose on entry and exit and tight in the middle. Norris called the No. 60 down pit road for four tires and fuel along with air pressure and wedge adjustments.

On a subsequent restart, cars bottled up and Pastrana received contact from a car behind him, which sent the No. 60 for a spin, ultimately leaving the team in 20th.

Kyle Busch is fourth in Richmond