No Bull: Brennan Poole is ready to take on Chicagoland 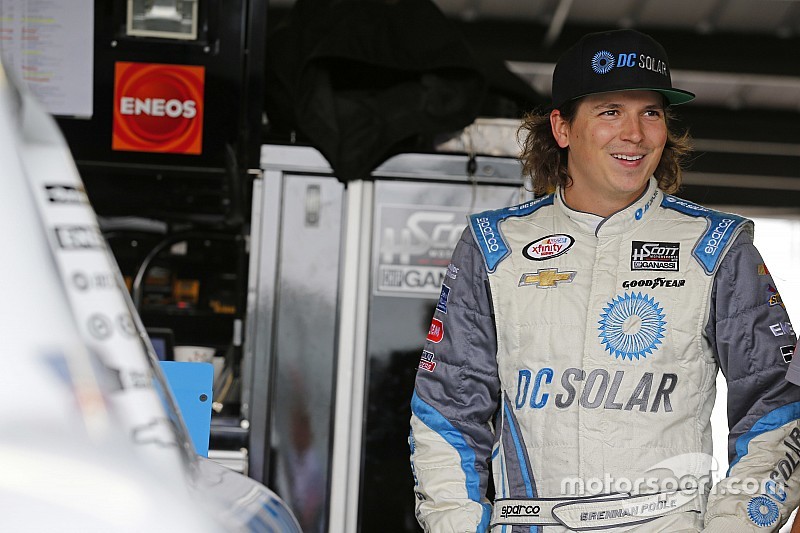 The HScott Motorsports with Chip Ganassi Racing driver talks racing and sharing a competitive nature with his girlfriend.

With just 17 opportunities to establish himself in the NASCAR XFINITY Series, Brennan Poole is looking to make the most of every race in 2015.

So far, the strategy has worked well for the 24-year-old from The Woodlands, Texas, who will make his ninth start in the No. 42 DC Solar Chevy for HScott Motorsports in Saturday’s Owens Corning 300.

And with just eight starts in the first 13 scheduled NXS races Poole has gained an incredible amount of experience in his first four months on the job.

“That’s been really great. That’s really helped me as a driver and to be able to develop my skills more quickly. I’ve been learning a lot. Trying to take it all in and just remember it and use it each week when I get into the car. It’s important to take what you learned and then apply it the next time you get behind the wheel. Just learning how to race better. These guys are just so good and they do so many things that I’ve never seen before coming up through the ranks. That’s been cool. I can’t give all my moves away, but that’s been fun.”

Mess with the bull

Poole is currently 22nd in the point standings. His best finish came during his debut at Las Vegas in March when he finished ninth. His average finish of 18.8 took a hit after a run in with  J.J. Yeley at Iowa Speedway on May 17, when NASCAR parked Poole for dumping the veteran following a misunderstanding on the track Without that 38th-place finish, Poole average result would be 16th.

Still, after Friday’s practices at Chicagoland Speedway, where Poole posted the most laps (94) in the two sessions, he felt this was the best race car he’s had since joining the team. The HScott/Chip Ganassi Racing driver already has a comfort level built at the 1.5-mile track after finishing second in an ARCA race in 2012 — Poole’s only full season on that tour. But he amassed solid results that season where Poole finished third in the point standings with an average finish of 8.3. His overall ARCA results include six wins, four poles, 18 top fives and 27 top 10 finishes in 35 starts.

Poole has mixed feelings on whether it’s hard to gain momentum while running a part-time schedule. For now, he's just happy to have seat-time in a car.

“Fortunately this year with my scheduling I’ve been able to run several times in a row — multiple races — so that’s been real big for me,” Poole said. “Weeks where I’ve been able to go back-to-back-to-back. I think I’m running the next three to four in a row coming up and those are the time that are real helpful.

“It is tough when you’re in the car and then out of the car for a few weeks. There is a lot to think about and some things get lost in there. But I try to take notes and write down as much as I can and refer to the things that I’ve learned so I can remember them when i get back in the car. But you always have to tiptoe when you get back in the car, kind of get that feeling back before you can get going. That’s probably the toughest part about running part-time.”

A partial schedule has enabled Poole to enjoy some quality time cheering on his girlfriend Lindsey Giannini, who was named Miss New Jersey for the upcoming Miss America Pageant contest last weekend.

“I was there for that and it was pretty cool to share that moment with her” Poole said. “It’s very stressful. I think I know a little bit more about what she deals with when she comes to races. I never experienced that before. I’d never been to a pageant.

“I definitely had some nerves for her and was a little stressed because I know that was her dream and I wanted to see her achieve that so badly. That was really cool.”

While it’s a different type of competition, Poole can appreciate the time it takes Giannini to be on top of her game before going into battle. She invested four years into pageants before winning the penultimate prize.

“We definitely talked about it We help each other calm down, especially in stressful situations when things are on the line,” Poole said. “We’ve kind of been there for each other. That’s been really cool. It’s definitely been a special relationship, so I feel blessed to have her in my life.

“She's been really supportive. This is my first time racing at such an extreme level, which such extreme competition. So to have that, extra support has been really great. She’s always pushing me to be better, not just on the track but off the track with all my dieting and working out and all that kind of stuff, too.

“So we definitely discuss it and we help each other when we’re competing to be better.”