Parker Kligerman looking to hop, skip and jump his way up the standings

Kligerman has held steady in the 10th spot since the completion of race No. 17

MOORESVILLE, N.C. (Nov. 13, 2013) - In his first full time campaign in the NASCAR Nationwide Series, Parker Kligerman enters the season finale at Homestead-Miami (Fla.) Speedway with a realistic shot at finishing eighth in the championship standings. The Connecticut native finds himself looking to hop over Kyle Larson, who is one point ahead, for ninth, and skip over former series champion Brian Vickers, who is 14 points ahead but will not be racing due to a blood clot in his right calf, and jump into the eighth position. 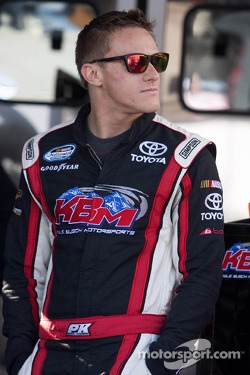 Kligerman has held steady in the 10th spot since the completion of race No. 17 at New Hampshire Motor Speedway in Loudon in July when he dropped two spots in the standings after spinning to avoid an accident and getting stuck in the mud during the first attempt at a green-white checkered finish. Over the last seven weeks, the 23-year-old driver has posted six finishes of 13th or better, including four top 10's, and slowly but surely reeled in Larson, who was 67 points ahead of him leaving Richmond (Va.) International Raceway in September. Over those seven races, KBM's wheelman has produced an Average Starting Position of 9.6 and Average Finish of 12.1 compared to his counterpart's Average Starting Position of 18.7 and Average Finish of 21.6.

The talented wheelman has four career starts at Homestead-Miami, two each in the Truck Series and the Nationwide Series. His best performance came in the Truck Series last year, when he captured the pole and led five laps en route to a seventh-place finish. Kligerman also had a respectable day in the 2010 Nationwide Series event, coming from his 23rd starting position to finish 13th in his Smith Motorsports entry.

Kyle Busch Motorsports ended their inaugural Nationwide Series campaign on a high note, with owner-driver Kyle Busch capturing the pole, leading a race-high 89 laps and finishing second. Kligerman is hoping that this year's season ends with another strong run and that he can hop, skip, and jump his way to ending the season ranked eighth in the championship standings.

Parker Kligerman, Driver of the No. 77 NNS Toyota Camry:

How would you assess your first full season in the Nationwide Series? "I think when you look back at the goals we set at the beginning of the season maybe we came up just a bit short, but with being a single-car team competing against multi-car highly-funded teams I think that everyone at Kyle Busch Motorsports can be proud of our season. It was my first full season in the Nationwide Series and it was also Eric's (Phillips, crew chief), so there was definitely a learning curve, especially with it being KBM's second season running Nationwide cars and basically a brand new group of guys. My goal at the beginning of the season was to be top five in points and to win a race. A third of the way through the season, I was sixth in points and there were several races where we were in contention for a win but just came up short -- both Daytona's, Talladega, Michigan and Kansas are ones that come to mind. We had some struggles in the middle of the season, it wasn't that we lacked speed, we just didn't finish those races where we were running most of the race. We had one of the fastest cars at Michigan, took a gamble to get out front and drove away from everybody, but just needed it to rain and it didn't until five minutes after the race was over - cost us at least 20 points. A few weeks later in Daytona we were right where we wanted to be for the green-white-checkered finish and got disconnected from Austin (Dillon) and ended up 18th. Then a few months ago we had a string of three DNF's in five races and that just killed us. Same thing in each of those races, we had decent runs going and just didn't get the finishes we deserved. The last five weeks we've put together a string of solid runs and it's put us in a spot where if we go out and have a strong run this weekend, we can jump up to eighth in points. Not quite where we wanted to be, but all things considered, we'll take it."

Eric Phillips, Crew Chief of the No. 77 NNS Toyota Camry

How would you assess your team's season? "If I had to grade it, I would probably say a C+ or a B-. It's been an up and down season. For the most part we ran decent, but there were a few times we just didn't do the things we needed to. If you look at where we are in points, I think we probably should've ended a little higher - should've been in the top five in points. We knew going into this season that the competition was going to be tough, but if a few things would've went just a little different the second half of the season I think that we could've been a top-five team."

KBM-13: The No. 77 Kyle Busch Motorsports team will unload KBM-13, the team's newest Camry, for Saturday's Nationwide Series Finale at Homestead-Miami (Fla.) Speedway. This is the second new chassis built in 2013 under the direction of crew chief Eric Phillips. The Toyota was one of the cars to beat in its last start at Kansas Speedway in Kansas City, leading seven laps before getting shuffled back after a lengthy pit stop late in the race. Kligerman was able to rebound and bring home a seventh-place finish. The Camry has qualified seventh or better in each of its three career starts and finished inside the top 10 twice.