Pastrana prepares for an epic ride with RFR

Travis Pastrana is ready for his first full-time season in the NASCAR Nationwide Series. He will be in a Roush prepared Ford Mustang as he heads to his first race at Daytona.

DAYTONA BEACH – The neon yellow stripe on the back of Travis Pastrana’s No. 60 Roush Fenway Racing Ford Mustang may blend in with the bright paint scheme that adorns the car, but little else about the action sports star blends in. The 6-foot-2 athlete brings a fresh perspective to NASCAR for his first full-time season with Roush Fenway Racing in the NASCAR Nationwide Series (NNS).

By NASCAR’s standards, Pastrana is not a rookie, having made nine starts in the NNS. Nonetheless, Pastrana will make his first NNS start at Daytona International Speedway (DIS) with a rookie stripe on his rear bumper.

I'm surrounded by a lot of knowledge and I'm ready to learn.

“It’s a scary feeling to be a rookie again,” Pastrana said. “As I come into NASCAR with success in other forms of racing and enter this year as a full-time driver with a top team – everyone’s expectations are pretty high. I’ve always liked to be thrown into the deep end.”

Although Saturday marks his first start in the NNS at DIS, Pastrana is no stranger to winning at the track.

“My first Supercross win was on the infield here at Daytona,” said Pastrana. “Daytona Speedweeks and Daytona Bikeweek have been two of my favorite events for as long as I can remember. Having the opportunity to race here in a NASCAR event is truly a dream come true.”

The driver of the No. 60 Ford Mustang knows that racing at DIS presents a new set of challenges, unique to restrictor-plate racing.

“Every driver I’ve talked to seems to agree that there is nothing that can prepare you for a restrictor-plate race,” said Pastrana. “Nearly 200 mph – three and four wide and not being able to see anything in front of the car you are pushing – not being able to slow down when you are being pushed and all heck breaks loose in front of you.” 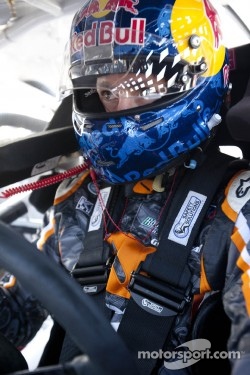 Roush Fenway Racing teammate, Trevor Bayne, who will pilot the No. 6 Cargill Ford Mustang this season, is a strong teacher for Pastrana, having already won the Daytona 500.

“Hopefully, I can earn Trevor's trust because he's the man here and I couldn't ask for a better teammate for my first race here.”

Pastrana feels as though he has placed himself in a perfect situation to capitalize on success in the 2013 season and beyond.

“I'm lined up with great equipment and an amazing crew,” added Pastrana. “I'm surrounded by a lot of knowledge and I'm ready to learn. This season is going to be an epic ride. Game on.”