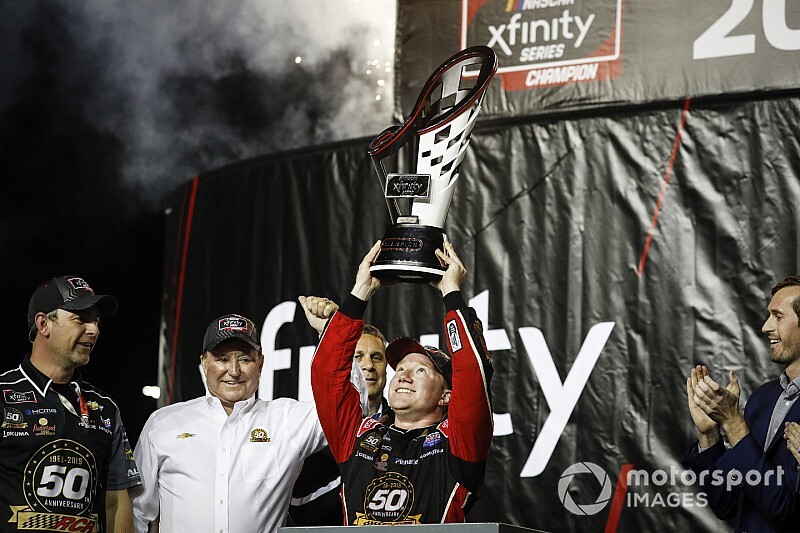 After a furious back-and-forth battle with Cole Custer in the final 20 laps, Reddick emerged the winner of Saturday’s Ford 300 at Homestead-Miami Speedway, giving him his second consecutive series championship.

“It’s all about this race team, man,” Reddick said. “This car was so, so fast. I’m losing my breath, I’m that excited. It’s really cool to go back-to-back. I made a lot of mistakes around Cole tonight and I knew he would race me hard.”

Asked about winning the Xfinity title in the 50th anniversary of RCR, Reddick said, "It's all about Richard (Childress), man. He's the one that believed I could be a champion before I won the first one, and I was just really glad to keep him true to his promise."

The win was Reddick’s sixth of the 2019 season and ninth of his career. He will move to the Cup Series next season, driving the No. 8 Chevrolet for RCR.

Briscoe hit the wall on Lap 123 of 200 in Turn 1 to bring out a caution. All of the lead-lap cars elected to pit with Bell the first off pit road.

On the restart on Lap 128, Bell was followed by Reddick, Gragson, Brandon Jones and Cindric. Custer lined up sixth and Allgaier seventh.

With 60 laps remaining, Bell had moved out to a 1.2-second lead over Reddick with Custer right behind him challenging for the second position. Allgaier, the final title contender, ran fifth.

Riding the high line, Reddick grabbed the lead on Lap 152 from Bell, who quickly got passed by Custer for the second spot.

On Lap 160, Bell was going to be the first to pit for his final stop but missed the entry to pit road and had to go around again. Allgaier was next to pit on Lap 161.

Reddick and Custer pit on Lap 163 as many others began making their final stop for tires and fuel to make it to the finish of the race.

Once the cycle of stops was completed on Lap 165, Bell still held the lead but his three challengers were lined up right behind him.

Custer went low on Lap 168 to get around Bell and retake the lead as the title contenders ran 1-2-3 and 6th.

On Laps 181 and 182, Reddick and Custer traded the lead before Reddick emerged with a small lead on Lap 183.

With 15 laps remaining, Reddick had moved out to almost a 1-second lead over Custer while Briscoe moved into third.

Custer tagged the wall on Lap 192, which cost him some speed on the track and he fell more than 2 seconds behind Reddick.

Custer, who had fell a lap down for a loose wheel, also passed Cindric to move back on the lead lap just before the conclusion of the stage.

Following the break between Stages 1 and 2, those cars that had not pit before the end of Stage 1 did so but Briscoe stayed out and remained in the lead.

On the restart on Lap 52, Briscoe was followed by Custer, Reddick, John Hunter Nemechek and Jones.

Cindric went low to get around Briscoe and moved into the lead on Lap 54.

Custer dropped down pit road on Lap 61 under green with what he believed was a loose wheel. Once he returned to the track he was running 32nd and one lap down. His team confirmed the right-rear wheel was loose.

With 25 laps remaining in the second stage, Cindric had built almost a 1-second lead over Bell with Allgaier running in third.

After 75 laps, Cindric remained out front while three of the four title contenders ran in the top-five. Custer remained mired in 28th, one lap down.

Jeb Burton nearly spun out trying to pit on Lap 79 with a flat right-rear tire but was able to save it.

Briscoe held off a charge from Custer to take the Stage 1 win.

Custer finished highest among the Championship 4. Haley was third, Reddick fourth and Nemechek rounded out the top-five.

Reddick, who started on the pole, ran out to an early lead.

On Lap 4, Ray Black Jr. blew an engine coming off Turn 4 and slid through the infield before coming to a stop to bring out the first caution.

The race returned to green on Lap 12 with Reddick still in the lead.

Tyler Matthews went up the track and slammed into the Turn 3 wall on Lap 15 to bring out the caution once again.

Once again the leaders stayed out during the caution and Reddick continued to lead on the restart on Lap 23.

On Lap 33, NASCAR threw a caution for a piece of debris caught in the Turn 3 SAFER barrier from a previous accident.

Reddick and Custer were among those who pit under the caution, as Bell inherited the lead by staying out. The race returned to green on Lap 38.

Gragson went high and got around Bell on the restart to take the lead for the first time in the race.

Briscoe split two cars to move into the lead on Lap 40 as Custer and Reddick had already made their way back into the top three.

Myatt Snider to debut in Xfinity Series in 2020 with RCR