Regan Smith holds off Gibbs duo to win at Dover 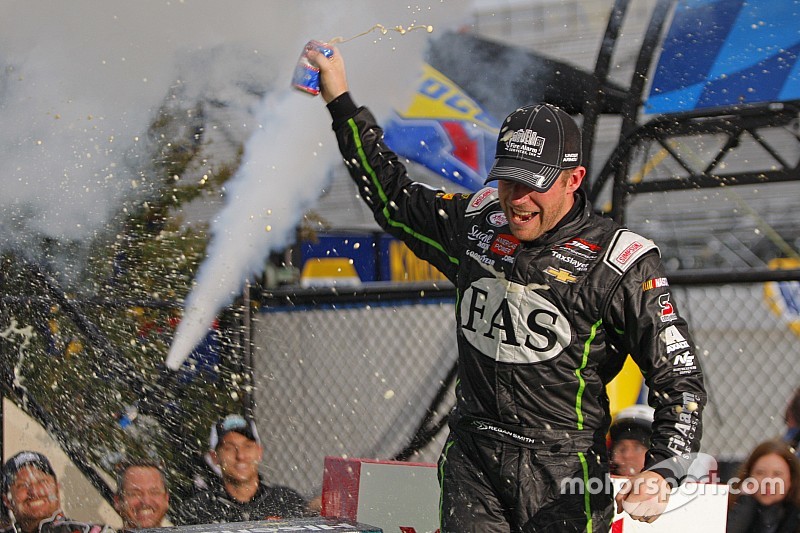 Smith, who doesn’t have a job secured for next season, is getting everything he can out of his final race with JR Motorsports.

The win is Smith’s second of the season and also helped push him back into the series championship picture. Smith is now third in the series standings, 36 points behind leader Chris Buescher with five races remaining.

“It was just fast all day. We had a good car the last time here and we felt good even though we didn’t have any practice,” said Smith, who now has six career wins in the series, all with JRM. “The restarts were everything.

“When (Elliott Sadler) gave us the outside line, that kind of played right into our hands there. I’m looking forward to the next couple of weeks; I don’t know if we can get ourselves back into the championship picture, but we’re going to keep digging.”

As the final laps wound down, Hamlin was told by his team that he was good to go on fuel and mounted a final charge to run Smith done, but to no avail.

“I knew being out front I didn’t think he could pass me. With about 25 (laps) to go, my team told me to be conscious about the fuel. It all worked well.

“This is huge. I want to keep racing in good race cars next year so this is huge. I wish we had 10 (wins) by now but it hasn’t quite gone our way this year. I really felt like we could have four or five right now.

“We’re going to keep fighting and keep digging. I don’t go down without a fight.”

Chase Elliott, who nursed his fuel to finish seventh, moved into second in the standings, 24 behind Buescher.

“We were about a lap and a half on that last run, we just wanted to be on the safe side,” Elliott said. “I think that was the right move. We just need to go win and outrun our opponents.”