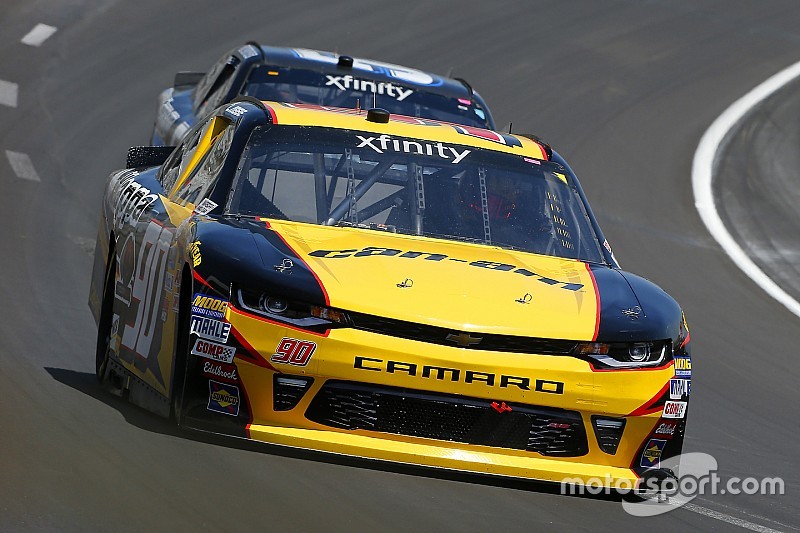 The St-Albert, Québec native qualified 33rd at an average speed of 183 mph on the high banked, newly repaved 1.5-mile oval. For him, it was a first time experience at running such high speeds in a stock car.

‘‘At Phoenix last year in my first ever Xfinity race, we ran 140 mph lap averages. Here we are running 183 mph lap averages – an enormous jump and adaptation,” said Labbé after his qualifying attempt. “After running 29.9-second laps in practice, we ran 29.5 sec laps in qualifying and expect to run 29.2 sec lap in the race, with the car still stable and easy to drive.”

The new, reduced downforce bodywork package and the new asphalt meant that there were just two racing lines at the start of the race compared to three in the past. Several drivers lost control of their machines and even tapped the wall when going a bit too hot in the corners.

Right off the green, Alex Labbé - driving the No. 90 Can-Am/Kappa Chevrolet of King Autosport - was involved in a six-car battle that lasted until the 170th of the 200-lap race. The Quebecker then managed to break away from his rivals and cross the line in 28th position.

King Autosport and Labbé are now planning to run several more Xfinity races this year, enough to acquire a full license in preparation for a full Xfinity campaign in 2018.