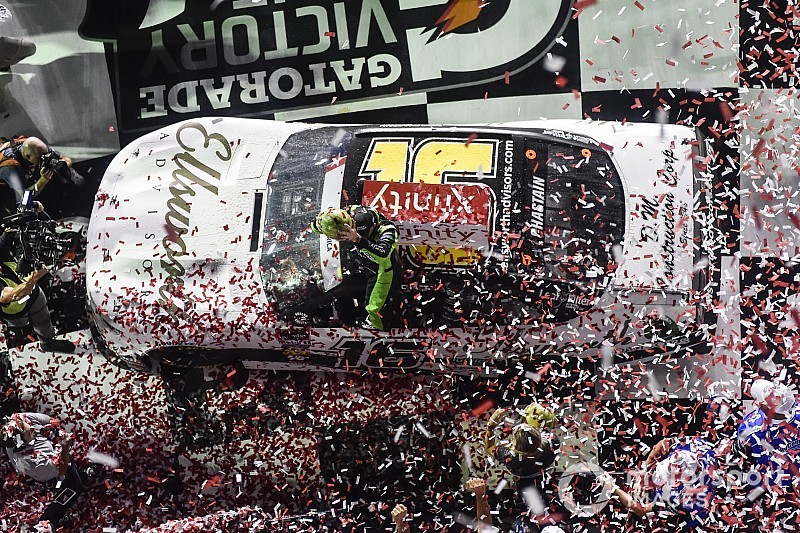 Ross Chastain has now won in two of the three NASCAR national series this season.

Chastain, who started the season running for Xfinity Series points, switched to the Truck series, where he has won two races and remains in contention for the series championship. Friday night’s race was his fourth Xfinity start this season for Kaulig.

The win is Chastain’s second in the Xfinity Series. His first came last year running for Chip Ganassi Racing.

“Oh my God – we did it. Daytona – I see you guys up there,” Chastain said on the frontstretch while looking up at the grandstands. “I watched these races as a kid every July.

“These guys gave me a great race car. Oh my God, we won a race at Daytona! We did it!”

Chastain, whose family owns a watermelon farm in Florida, proceeded to take one and smash it on the track at the start/finish line.

The win is the first for Kaulig Racing in its fourth year of existence.

Christopher Bell finished fourth and Austin Cindric, who rebounded from an early-race wreck, ended up fifth.

The race returned to green on Lap 80 with Chastain in the lead followed by Justin Allgaier, Noah Gragson and Haley.

On Lap 81, Allgaier got around Chastain to take the lead only to see Chastain reclaim it on Lap 82.

Tyler Reddick powered through the top five and took the lead on Lap 86 only to see a multi-car wreck erupt on the backstretch on Lap 87 to bring out a caution just after Haley grabbed the lead for the first time in the race.

The race was red-flagged for nearly 18 minutes to clean the track of debris. When it returned to green with 10 laps to go, Haley was out front followed by Reddick, Bell and Chastain.

Reddick went to the outside of Haley to grab the lead shortly after the restart. Chastain, with help from Haley, grabbed the lead off Turn 3 on Lap 93.

Allmendinger withstood a tough challenge from Annett on the final lap to come away with the Stage 2 victory.

Following the break between Stages 1 and 2, several lead lap cars elected to pit with Gragson the first off pit road. On the restart on Lap 36, Allmendinger – who stayed out – led the way followed by Chase Briscoe and Annett.

With 20 laps remaining in the second stage, Allmendinger continued to maintain a small but steady lead over Annett. Briscoe was third, Custer fourth and Chastain ran fifth.

On Lap 45, Reddick shot up the track and into Briscoe. Both Briscoe and Reddick ended up in the infield grass with extensive damage. Allgaier also received some damage from that incident.

The race returned to green on Lap 51 with Allmendinger out front, followed by Chastain, Bell, Gaulding and Annett.

With five laps remaining in the second stage, Allmendinger held a small lead over Chastain. Annett was third, Haley fourth and Timmy Hill in fifth.

Chastain held off a wild charge from Ryan Sieg on a restart with two laps remaining to claim the Stage 1 victory.

Riley Herbst finished third, Gragson was fourth and Hill rounded out the top-five.

The race got underway following a nearly 2 ½-hour rain delay and Reddick, who started on the pole, took early command of the race.

Chastain briefly moved into the lead on Lap 5 but Allmendinger wasted little time on making his own move into the lead.

On Lap 9, several cars went three-wide and Caesar Bacarella got into Josh Williams to trigger a mutli-car wreck that also collected Cindric, Brandon Jones, Graf and Ray Black Jr. Custer also pit to check to check on damage he may have received in the incident.

The race returned to green on Lap 14 with Chastain in the lead. He was followed by Annett, Allmendinger and Gaulding.

With 15 laps remaining in the first stage, Chastain held a small advantage over Bell followed by Allmendinger and Allgaier.

After 20 laps, teammates Chastain and Allmendinger lead the way with Sieg moving up to third.

On Lap 23, Allgaier got into the back of Creed in an incident that sent Nemechek spinning through the infield grass.

The race returned to green on Lap 29 with Chastain out front followed by Sieg and Haley.