Ryan Blaney (No. 22 Snap-On Dodge Challenger) Finished 9th “I think we made pretty big gains to where we started out practice today. We really struggled in practice and when we qualified we were really bad, too. We had to definitely make up ground there. Jeremy made a pretty good call there taking two tires the first stop and got us some track position and was kind of able to hold on. We needed it to turn better through the center, that’s what we needed but it’s a pretty good improvement for how they (No. 22 team) were here the first time; first time they really struggled here. Improved a little bit and I can’t wait to go to Kentucky with these guys and see what we got.” 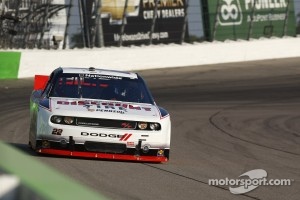 YOU RACED DARRELL WALLACE JR. HARD FOR A POSITION IN THE TOP 10 DURING THE CLOSING LAPS OF THE RACE. “Yeah I made some contact there getting into one. It’s hard to do anything when he’s laying on my door getting in the corner. It was good racing with him.”

ARE YOU GUYS MAD AT EACH OTHER OR WAS THAT FAIR GAME SHORT TRACK RACING? “It’s a little fair game short track racing. I think he got up to fifth and I passed him and going past him I filled the hole and he come down across our nose over in three and then I really wasn’t going to take it. None of us wrecked, we kept going. He came out a couple spots back but kept rolling.”

YOU ARE RUNNING A LIMITED SCHEDULE. HOW DIFFICULT IS IT TO GAIN MOMENTUM WHEN YOU’RE NOT RACING EVERY WEEK? “It definitely helps racing Brad’s (Keselowski) RAM. That’s definitely helping, running every week getting seat time. It is a little bit difficult when I’ve only got a few starts. I’ve got six starts in the Nationwide car so I’m starting to learn ‘em. But this Penske stuff is a whole new deal. It drives a whole lot different so I’m still learning that and it is difficult when you’re racing a handful of times. Hopefully we’ll got Kentucky and be up front.”

IS FINISHING IN THE TOP 10 A GOOD NIGHT FOR YOU? “I thought it was an okay night from where we began the night. We began the day really bad, qualified 27th and had to make all that ground up. You know a top 10 at a short track where it’s not their strong suit. It’s not as good as their mile-and-a-halfs I think that’s a pretty solid top 10. We learned a lot.”

Jeremy Bullins (Crew Chief, No. 22 Snap-On Dodge Challenger) “It was a good night. We kind of dug ourselves a hole qualifying. The car was a little too tight for us to qualify so we had to try to get some track position early and Ryan did a great job hanging on until we could another caution and keep working on the car. It’s such a shame, some of those late restarts, some of these guys were all over the place. I really felt like if we could have got to the top five we could have stayed there with the speeds that we were running. We got kind of hung up in the wrong lane a couple of times and Ryan did a good job of staying out of trouble and coming home with a good solid top 10.”

YOU CHANGED JUST TWO TIRES ON THAT FIRST PIT STOP. “We probably gained about five spots because of that pit call. The thought process at the time was there were a lot of cars running the same lap time. If we could get ahead of ‘em I felt like some of ‘em were going to pass us, some of ‘em were probably going to be better than us on four tires but we felt we could hold some of ‘em off and that was kind of the case. The guys that were faster got by and we held the rest of ‘em off until the caution came out and we netted some spots.”

HOW DIFFICULT IS IT TO BUILD MOMENTUM WITH RYAN GIVEN THAT HE’S NOT IN THE CAR EVERY WEEK? “It is because your starts have some time between ‘em but you know we try to stay in communications. I’ve been hanging out with him with his Truck team and trying to learn what he likes in a car and that kind of stuff. We’re trying to approach it that way. Just trying to learn as much as we can about him and what he wants the car to feel like as possible. We’ll keep getting better.”

YOU SCORED A TOP 10 FINISH TONIGHT. IS THAT WHAT YOU CONSIDER A GOOD NIGHT? “A top 10 for us is an okay night. We’d much rather come home in the top five but we have high standards. A ninth is not a disappointment but we all want to be in the top five every week.”

Sam Hornish Jr. (No. 12 Alliance Truck Parts Dodge Challenger) Finished 30th “We got a run on the 31 (Justin Allgaier), he decided to block me, and then he didn’t go then through the middle of three and four. The 51 (Ty Dillon) rolled to the outside of him and when he got to the exit he just went to the wall and the 51 had to check-up. I tried to not get in the back of the 51 and the 22 (Ryan Blaney) runs into us. It was just like a chain of events. I don’t know why Justin was blocking. I know that’s how he drives so I guess I should have known a little bit better. We were pretty good starting off at the beginning of the race just not good enough at that point.”

WHAT HAPPENED? “Got a good run on the 31 and he decided that he was going to block me which I kind of expected a little bit and he didn’t go very good through the middle of three and four and I ended up getting into the back of him right as I got to the throttle. And then the 51 rolled to the outside of both of us and the 31 came up and pinched the 51 into the wall. I tried to stay off the 51 and got run into by my teammate which it’s not his fault. It’s one of those things. I just hate it for everyone on this Alliance Truck Parts Dodge. We’d run all but two laps up to this point so far this year so this is a little bit of a hard day for us. We’ll keep our heads-up.

“It’s one of those things. We try to do everything we can do to not have any issues. Just got caught up in, I can’t say it was somebody else’s problem because we were right in the middle of it, but just unnecessary for that point in the race, I felt. It’s not over (championship race) but, you know, it’s not making it any easier.”

Harvick takes the win at Richmond for RCR