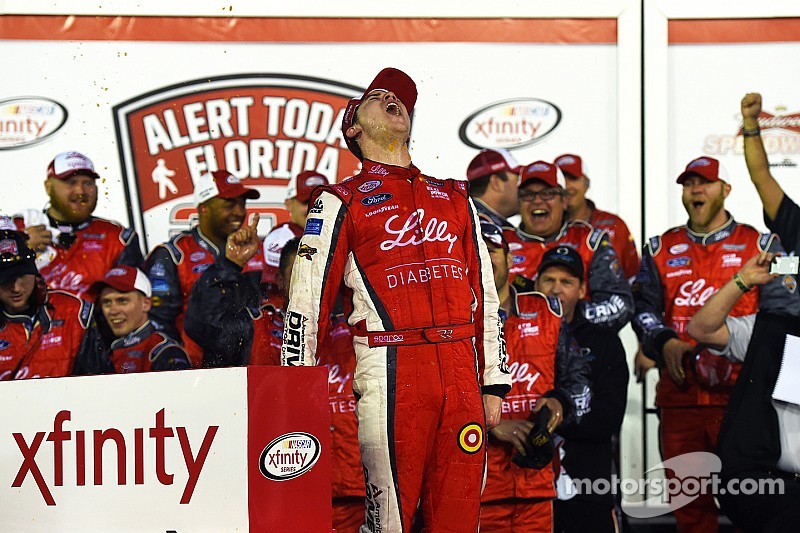 The 21-year-old driver survived a carnage filled race to take home his first career win at the Daytona International Speedway.

The race marked the first-ever event with new series sponsor Xfinity. To garner his first Xfinity victory, Reed was running third behind leader Brad Keselowski on the final lap when he got a big push from teammate Chris Buescher and the duo shot to the front and taking the checkered flag in that order.

Said Reed in victory lane, “Four years ago I was diagnosed with Type-1 diabetes and was told I would never drive a race car again. And now I am standing in victory lane at Daytona with Roush Fenway. Oh, my God, we won Daytona. This hasn’t sunk in yet."

“We got shuffled back with three to go, and I was just trying to salvage a good finish. When a wreck happened on last lap, we got a massive run.”

“This was cool for Roush Fenway to get the win and finish one-two,” he said.

“It was just what we needed to do. We are in good shape and so much better off than we were a year ago when we missed the race. This race was insane and I had a blast.”

“Our car was a rocket-ship and while third is okay, we need to win some races. This place can be frustrating when you go from front to back. I try to keep my winning, aggressive attitude, which should help me.”

Finishing fourth was Austin Dillon, who recovered from an incident during a red flag to gain fourth place. Keselowski held on for fifth.

Sixth through 10th were David Starr, Aric Almirola, Kyle Larson, Ross Chastain and Dale Earnhardt Jr. Larson was going for lead on 119th lap but got turned around and ran through the grass before recovering.

For the first 80 laps, the race featured non-stop action and no caution flags, but after the initial slowdown, the tenor of the race changed from a calm one to mayhem. With the field bunched tightly after the restart, a 12-car crash took place near the starting line. It started when Larson turned the slow-moving car of Daniel Suarez, jamming up the field. 2014 race winner Regan Smith got the worst of it, flipping twice and collecting others in the melee.

Immediately, the race was red-flagged to allow for track clean-up.

Said Smith, who had led 15 laps and was running up front, “I had fallen back on the restart and I saw Suarez wrecking some three times and I had nowhere to go. I went as low as I could get, tried to save it but then got into trouble. He was two laps behind and shouldn’t have been where he was.”

When the cars slowed on backstretch, Mike Wallace powered into Austin Dillon. Reportedly, Wallace’s radio had quit and didn’t know the field was stopping.

After stopping for 25 minutes, the race resumed with the Fords of Reed, Keselowski and Chris Buescher in charge. The intensity of the competition picked up when the race resumed, only to have another grinding crash when Kyle Busch jammed Erik Jones, triggering a 10-car crash.

Busch’s car took a sharp left turn, rocketing across the track and plunging head-long into a concrete inner wall at high-speed. Although Busch got out of car on his own, he called for medical attention. After being checked out, he was transported to a nearby hospital for evaluation.

Others involved were Chase Elliott, Brendan Gaughan and Elliott Sadler. When the race resumed with six laps to go, Keselowski had the lead followed by Reed, Larson, Ross Chastain and Buescher.