HUNTERSVILLE, N.C. – Since 1998, ESPN The Magazine has issued a special edition of its publication called “Next.” The special issue has become an annual event that recognizes an elite group of emerging athletes sports fans should keep an eye on as they are competitors on the verge of stardom, and in the unique position of possibly transcending sports into pop culture.

As a veteran driver on the NASCAR circuit, Elliott Sadler has already proven himself as a championship contender and star competitor in the Nationwide Series. During his 16-year NASCAR career, Sadler has won races and contended for championships in both the Nationwide and Sprint Cup Series. 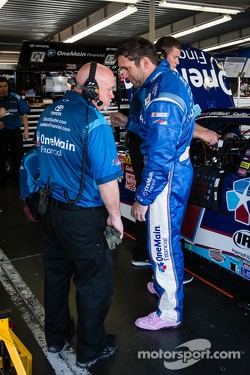 His career Nationwide record includes nine wins, 46 top-fives, 86 top-10s and 15 pole awards. And since returning to the series as a full-time competitor in 2011, the Joe Gibbs Racing (JGR) driver has finished a close second in the Nationwide Series championship battle the last two seasons.

With such a decorated career, the opportunity for first-time or new experiences are hard to come by. This weekend however, Sadler will be able to do just that as he’ll become the “next” driver to join the Interstate Batteries Racing family of drivers.

Interstate Batteries and JGR enjoy a partnership that stretches back more than 20 years to 1992, JGR’s first full NASCAR season. And when Sadler takes to the track at Las Vegas Motor Speedway for Saturday’s NASCAR Nationwide Series Sam’s Town 300, he will become just the seventh driver to drive an Interstate Batteries-sponsored car, joining the likes of NASCAR champions Dale Jarrett and Bobby Labonte, as well as Kyle Busch, Denny Hamlin, Mark Martin and J.J. Yeley.

It’s a unique fraternity into which Sadler will pledge this weekend, made even more special considering his long relationship with the pioneer of that group – Dale Jarrett.

While holding off one of the greatest competitors in the late Dale Earnhardt to become a Daytona 500 champion, Jarrett made the last circuit around the track while his father, Hall of Famer Ned Jarrett, made the call of the last lap as part of CBS’ broadcast of the race.

It was a poignant moment for the father and son that transcended the world of auto racing and made a lasting impression on a new generation of NASCAR drivers – including Sadler.

Ten years after that historic moment, Jarrett would take Sadler under his wing as a teammate at Robert Yates Racing. The two raced and worked together during the course of four seasons from 2003 to 2006, becoming close friends – a natural occurrence given everything the two drivers have in common.

Both are natives of the South and come from families with racing history. They each were standout high school athletes who had the opportunity to compete collegiately on scholarship – Jarrett in golf and Sadler in basketball. They share a love of traditional stick-and-ball sports, particularly when it comes to college basketball and the North Carolina Tar Heels.

The commonality that Sadler and Jarrett share is lengthy, and it expands this weekend as they will now share the honor of having driven for the respected Interstate Batteries brand. And while it’s very early in the 2013 season, Sadler hopes the “next” thing he and Jarrett shares is the title of NASCAR champion.

How is it to be part of the Joe Gibbs Racing organization, so far? “The biggest thing is it starts at the top with Coach Gibbs and he has been phenomenal. He’s very personable and just really welcomed me to the team like part of the family from day one.

The way they conduct business and how they run things has been really awesome with J.D. Gibbs and his whole staff. It’s neat to feel welcome at a place and feel wanted at a place.

It starts with them and it trickles down through the team. We’re all still getting used to each other as far as how things are done. How I want things done and how I see things compared to how they do is a lot different for me than in the past, so we’re kind of learning on the fly.

What are your thoughts about the race this weekend at Las Vegas? “Well, Las Vegas is fun. It’s a fast racetrack. It’s very slick and it’s got some bumps and stuff in turn one but it always opens up to a really good race.

You can run on the bottom, the middle, the top. That track has really aged well and has become a multi-groove racetrack that lets you put on a good show for the fans.

All of the races there are really good shows. Las Vegas itself is a great place with a lot of great entertainment, of course. It’s a great destination and the track has done a great job with the garages and provided well for fan accessibility.

What does it mean to you to be driving for a brand like Interstate, which has been a part of this sport for so long? “Interstate has set such a great example by being so loyal to the sport for such a long, long time.

And I know how important the Interstate Batteries sponsorship and brand is to Joe Gibbs Racing. That is one thing they explain to you when you first come over here so, to have them on our car at such an elite racetrack like Las Vegas, I’m pretty proud of that.”

What is the key for finding success at Las Vegas? “I think the key for Vegas is you have bumps in the center of (turns) one and two and then bumps off (turn) four, so I think you fight trying to keep the car turning and working through the bumps because it upsets the car a lot.

You don’t have that at a lot of places. You have traditional mile-and-a-half tracks that are smooth and you just try to take advantage of the speed, but it’s easier to do on those smooth tracks.

It’s much harder at a place like Las Vegas with the way the track has aged. Coming from the 18 Cup car, we know Norm (Miller, Interstate Chairman) and everyone at Interstate Batteries well, and we would really like to get a win for those guys.”

It’s obviously very early in the season, but how is this first season as a crew chief going for you so far? “Daytona is such a different animal, but getting through Phoenix and Vegas – kind of getting through these first five races – is big and, so far, I think it’s going very well.

I have a lot of good people at JGR who are supporting me really well and that makes it easier for me, not to mention Elliott has been to all of these places and has experience, so it’s easier for a rookie crew chief to come in and be able to feed off the experience of JGR and him as the driver.”

What is the dynamic like of having and working with four Nationwide Series teams? “From a shop standpoint, I think the fourth team came on a little late, so it has them working really hard.

But, as far as all four of the teams working together, everybody has equal equipment and you know it’s all good. You know all of the crew chiefs and team guys are working together well. You can’t say that about a lot of places, but you can about JGR and that makes it really good.”