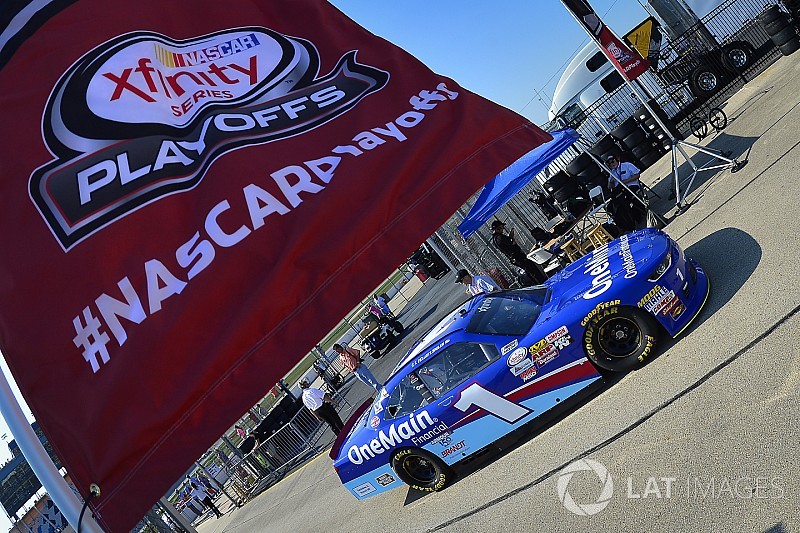 At 42, he’s battling for the Xfinity Series championship for the fourth time in seven years, entering the season finale at Homestead Miami Speedway.

Since returning to the tour full-time in 2011, Sadler feels this is his best opportunity to win a title. No, his numbers are not nearly as stout as last season’s. Yet in 2017 he’s been atop the standings after all but two races.

Will the seventh attempt be lucky for Elliott Sadler?

Knowing what they got

Sadler finds himself in a unique situation with his JR Motorsports teammates—Justin Allgaier and William Byron. For the first time in the Playoffs, three drivers from the same organization will face one another with one race to decide the championship. Although Sadler battled Allgaier in last year’s Championship 4, he says this year feels different.

“My guys, they've all been sharing information this week, crew chiefs and all are still going the same protocol they've always done, but I think Justin and William and myself understand that it's one race for one championship,” Sadler said. “We're going to race each other hard. We understand all the chips are on the table, and we all know what each other's got, which is a little bit different than racing people from other teams.

“I know William's setup, and I know Justin's, and we're all going to know what each other is fighting.  So there's a lot more information on the table. I think what it comes down to, you've got to race each other hard…you don't get this opportunity all the time, and you've got to try to take advantage of it when you get it.”

How important it would be

Brett Griffin understands what a title would mean to his friend. Griffin has been Sadler’s spotter since 1999. He’s guided Sadler’s course on the track through good times and bad.

“I think it would be the biggest day of his life, professionally speaking,” Griffin said. “I know he’s won Cup races and made the Playoff there, but we’ve been so close to this championship so many times. His mom and dad are here. Having Dale (Earnhardt) Jr., a personal friend of his as a car owner, who is running his last race that weekend. I don’t think there’s a better recipe for it being the best day of his life.”

Sadler has finished second in the standings three times in seven seasons. Although Sadler hasn’t won a race in 2017, he’s had a blast with the Kevin Meendering-led team over the first 32 races. But it’s now crunch time. And under the Playoff format, the veteran realizes nothing matters until the season finale.

“I feel like we’re the best car and the fastest car in this race of the guys that are competing for the championship. So we just all have to go out and do our job—no mistakes.”

Sadler has studied past races at Homestead. He was leading last year’s title battle when he was passed by Daniel Suarez on the restart with three laps to go. Suarez went on to win the race and the championship.

“A lot of things can happen in the championship races,” Sadler said. “So mentally, you’ve go to stay in the game. You got to stay with it. As long as you’re still on the lead lap, anything can happen to put yourself in contention especially late race restarts and stuff like that.

“The biggest thing for me over last year is I have my crew chief. Guys, I’m going to be honest with you. That was really hard last year. Harder than I thought it was going to be. I thought it was going to be fine. I thought we were just going to mosey along. But when things get stressful and decisions have to be made, having my crew chief this year, I feel way more relaxed about it. Way more optimistic because we’ve gone through these steps together all season long. That was a big right hook to me last year during the race and I think that’s something that will make me better prepared for Saturday night.”

Meendering was suspended for the final race last year due to a lug nut infraction. But he and the entire No. 1 JRM team will be in full force this weekend. And Sadler’s family will be there to support him as well.

“My mom and my dad are coming,” Sadler said. “I'm going to tell you what, guys, you don't realize this until you get older. My parents, just like a lot of parents that have kids they raised, sacrificed a lot for me and my brother when we were kids to make sure we have the best we could have.

“My parents are getting some age on them now and don't travel as much as they used to. This is kind of an eggs in one basket thing. I would love to hand my mom and dad a trophy for all the work they've done, and I know my time's running out. I get it. I understand it. This would be a great opportunity to be able to do that. So hopefully, we can make that happen.”