After finishing runner-up in the NASCAR Nationwide Series standings in 2011 and ‘12, Elliott Sadler ran most of 2013 outside of the championship conversation, ultimately finishing fourth.

This season, after only two races and with the series headed to Las Vegas for Saturday’s Boyd Gaming 300 (4:15 p.m. ET on ESPN2), Sadler is third in the series standings, six points behind leader Regan Smith. 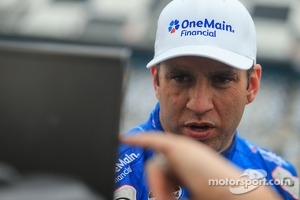 In the season-opening race at Daytona, the Virginia native finished fifth after starting in the same position. The following week at Phoenix, Sadler posted a sixth-place finish from a starting position of sixth

Sadler has run in seven Nationwide races in Vegas, finishing a personal-best third in 2012, one of three top 10s. Outside of his first series start at the track, he has never finished lower than 14th. In the 2013 race, he placed fifth. His average finishing position is a respectable 12.1. Also, in 12 starts in the NASCAR Sprint Cup Series at the 1.5-mile speedway, Sadler has one top-10 finish (sixth in 2004).

“The biggest thing for Las Vegas is maintaining speed all the way around the track,” said Sadler, whose car will be sponsored by longtime Joe Gibbs Racing partner Interstate Batteries. “At Las Vegas, you have bumps in the center of [turns] one and two and then bumps off [turn] four, so I think you fight trying to keep the car turning and working through the bumps because it upsets the car a lot.”

Sadler returns to the No. 11 Toyota for the second consecutive season, and he’s confident the stability he has in 2014 will pay dividends.

“There was quite a bit of a learning curve we were dealing with last year for me with a new team, new manufacturer … just getting used to everybody and everything,” Sadler said. “This year, everything is the same. It’s been probably five or six years since I’ve been able to say that, but this year everyone is the same – same crew chief, same guys working on the car.”