"It's really neat," Stenhouse said of winning the Nationwide Series title two-straight years. "These guys behind me are what do it all the time." 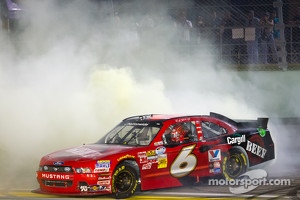 Stenhouse headed into Saturday's race with a 20-point cushion over the second-place driver, Elliott Sadler in the No. 2 Richard Childress Racing Chevrolet, and 25 points on third-place Austin Dillon in the No. 3 RCR Chevy.

Sadler and Dillon held on to their respective points spots, with Dillon finishing the race fifth and Sadler in ninth, but Dillon came within a single point of taking second from his teammate. Dillon was also declared the series rookie of the year.

"It was a great year," Dillon said. "I can't say enough about my team. We are basically a rookie team."

"It's more disappointing this year than last, because we controlled the points most of the year," Sadler said. "We raced hard but fell just short."

Stenhouse wasn't the only champion crowned following the race on Saturday. The No. 18 Toyota team of Joe Gibbs Racing took the owner title on the strength of a series leading nine wins by Joey Logano. Logano was back in the car for the final race of the year. He finished the event in 16th spot. 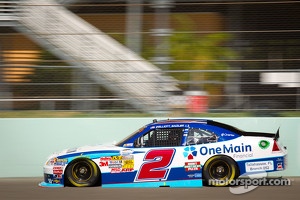 Stenhouse and Sadler remained close to each other for much of the race. Through much of the first half of the event, Sadler and Stenhouse ran second and third to then-race leader Kyle Busch in the No. 54 Kyle Busch Motorsports Toyota. They even fell back through the field together. During a caution near the halfway point of the 200-lap race, Stenhouse's No. 6 crew had a pit stop of longer than 16 seconds, but during that same caution, Sadler's No. 2 team missed a lug nut and Sadler had to return to pit road.

The two eventually both made their ways back into the top-10. Stenhouse's spotter, Mike Calinoff, kept trying to talk his driver into giving up spots to stay out of trouble and take it easy for the final laps, but the driver seemed to want nothing of it and continued to battle hard for positions up front. He was able to stay out of trouble, though, and claim the title, despite battling a loose race car and a potential oil pressure issue late in the race. "I wasn't concerned," Stenhouse said. "I was loose. We've had loose race cars before."

Meanwhile, Regan Smith won the race in the No. 5 JR Motorsports Chevrolet, Busch was second, Brendan Gaughan third in the No. 33 Richard Childress Racing Chevrolet, Sam Hornish Jr. fourth in the No. 12 Penske Racing Dodge, and Dillon rounded out the top-five.

Hornish locked up the fourth spot in points, and Michael Annett claimed the fifth and final position to be recognized at the series awards banquet on Monday evening. Annett finished the race 12th in the No. 43 Richard Petty Motorsports Ford, just one position better than the driver he was battling for the fifth spot -- Justin Allgaier in the No. 31 Turner Motorsports Chevrolet.