Can Chase Elliott hit the expectations of his new Nationwide team?

JR Motorsports made a splash with the signing of youngster Chase Elliott. The 18 year old son of former champion Bill Elliott will pilot the #9 NAPA Auto Parts Chevrolet for the 2014 season in hopes to earn top Rookie honors and perhaps even a bid at a title. It is unprecedented to see a young driver like Chase get the unique opportunity to not only start an entire season in the nationwide series at age 18, but also do it with full sponsorship and good equipment. I like to say that when it comes to motorsports, it is usually 60% driver and 40% equipment. The equipment will be there for Chase Elliott, but only time will tell if his talent will take him to new levels.

On paper, this is a dream situation for Chase. With Earnhardt Jr’s strength being sponsorship pull; it appears that Elliott will have all of the resources he needs to be competitive. But most importantly, he has veteran leadership as his primary resource and that will determine how successful this baby face teenager will be in the Nationwide Series. Elliott’s father, former Cup champion Bill Elliott will provide a cool, calm and collected environment for his son to flourish and I honestly believe that will be the reason his son succeeds in the Nationwide series this year.

There most certainly will be bumps in the road and I foresee a very exciting battle for top Rookie honors this year. Elliott’s most fierce competition will come from rival Ty Dillon. As many may remember, Dillon was dumped by Elliott at the road course in Bowmanville, Canada for his first career Camping World Truck Series victory and only win to date. With that being said, Elliott’s experience has been limited to a quarter of a truck series season and a win to go along with eleven ARCA/ReMax series starts. As much talent as Elliott has, this is a pretty big gamble for JR Motorsports as well as Elliott himself. Elliott would be foolish to turn down a Nationwide contract with full support from JR Motorsports and NAPA, but there is always the fear of jumping too quick into a series where he has zero experience. Will he fall flat on his face and regret not staying in the Camping World Truck Series? 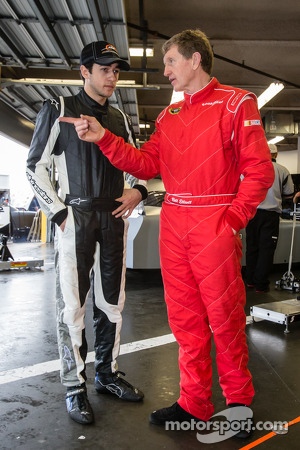 The expectations for Elliott will be extremely high and there are already whispers from various media outlets that Elliott might end up being the favorite to take over the 24 ride at Hendrick Motorsports. There is no doubt that Hendrick is actively looking for an eventual replacement for Jeff Gordon and drivers like Kyle Larson, Chase Elliott, Ryan Blaney and perhaps even Darrell Wallace Jr will have their shots at a dream ride at Hendrick Motorsports.

When all is said and done, I think it will be a little bit of a rough transition for Elliott. Elliott has all of the tools he needs to succeed but this is an incredibly difficult situation to enter for an 18 year old. If he is anything like Kyle Busch, he’ll beat the doors off the competition and be very successful. I’m certainly pulling for Elliott as this sport needs to churn out more future stars as many drivers are nearing the end of the primes of their careers and are warming up the seat for the future of NASCAR. Like many situations in life, only time will tell if Elliott is ready to succeed at one of NASCAR’s top levels.

Dale Jr. on Next Gen's 'surgical' steering and the challenge it presents