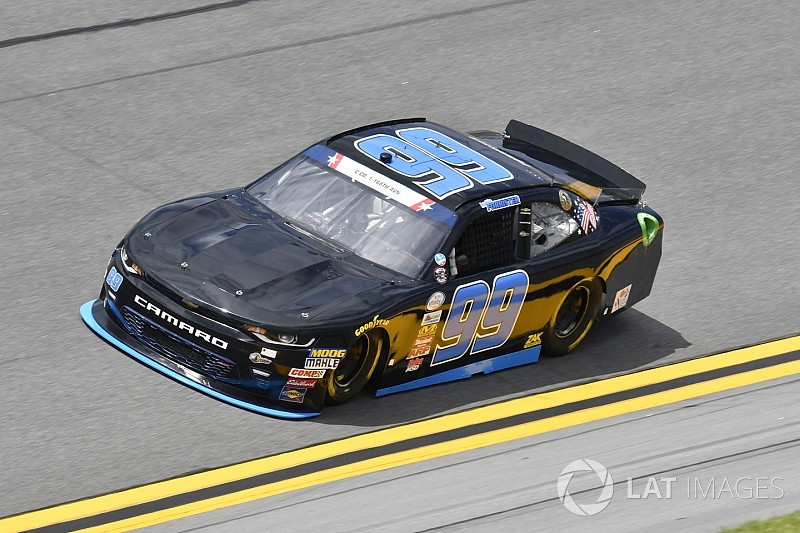 In NASCAR’s quest to showcase its next teen champion, the sport missed an opportunity to promote a real feel-good story that would have resonated with the sport’s core group of race fans.

As Byron celebrated, David Starr stood speechless, crying, unable to find the words for what he had just accomplished in the same race.

Starr, who turns 50 in October, scored his first top-five finish in his 112th career Xfinity start on Saturday. The affable racer wasn’t even scheduled to be at Daytona International Speedway last weekend. Korbin Forrester, who subsidized the ride, came down with the flu at the last moment and was unable to compete.

Starr was mowing his grass in Dallas, Texas when the phone rang last Thursday with the opportunity to drive the No. 99 SS Green Light Racing Chevrolet for Bobby Dotter.

A mechanical delay on a commercial flight grounded Starr in Atlanta. When he reached Daytona around noon on Friday, Starr rushed to the Xfinity garage where the team fitted him for the seat. He had no practice prior to qualifying the car on Friday afternoon. He posted the 33rd fastest time, then prepared for the race. The driver change came so quickly that Forrister’s name was still on the lineup sheets for the race.

The heat was so severe on Friday that several competitors had difficulty remaining hydrated. Early in the race, Starr realized his cool box wasn’t working. He quickly lost the draft when NASCAR called a caution for rain on Lap 10. The team was able to repair Starr’s air conditioning prior to the race resuming on Saturday.

Seven laps into the second stage, Starr had moved back to 28th. He was in the top 25 at halfway and moved up to 22nd with 10 laps left to decide the contest. As the drivers were completing Lap 99, Justin Allgaier made contact with Michael Annett, who lost control of this car and collected 11 cars in the process.

Starr came through the smoke with Joey Gase in tow before NASCAR red-flagged the race and sent the event into overtime. Starr lined up seventh behind leader Byron. Erik Jones stalled on the outside line and with a push from Joey Logano, Starr motored to fifth-place as cars wrecked behind him on the backstretch to freeze the finishing order and end the race.

“I was speechless; there were a lot of emotions and a lot of hard work that went into this,” Starr said. “It was hard to put into words what it meant.”

Even at 30, when he made his truck debut 1998, Starr had aged out of the Young Guns demographic. He ended his truck career running a limited schedule with former driver Dotter. He finished second at Talladega in 2013 before exploring steady opportunities in the Xfinity Series.

Two years ago at Daytona, Starr finished sixth in the February race, driving for Mark Smith. When he heard Dotter had an open ride for 2017, Starr called.

“I drove for Bobby in the truck series five years ago,” Starr said. “He became a good friend of mine. We did a lot with a small budget then — and now. But for us to finish fifth at Daytona, that’s just like a win for our small team.”