Bayne, currently second in the Nationwide point standings, previewed the weekend and his season to date.

Trevor Bayne, driver of the No. 6 AdvoCare Ford Mustang in the NASCAR Nationwide series, met with media members Friday morning in advance of Saturday’s race at Auto Club Speedway. Bayne, currently second in the Nationwide point standings, previewed the weekend and his season to date.

TALK ABOUT YOUR STRONG START TO THE SEASON. “Well, I feel like we have had an okay season to start off with.

We have been consistent at least. Starting at Daytona you set the bar for how your points racing will be the first half of the season and fortunately we came out better than we did last year with a third place finish. 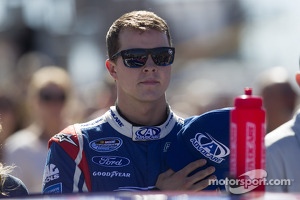 The last three races I think we wanted to run a little better, obviously, seventh and eighth place finishes aren’t what we show up to do. Phoenix, I thought we had a better car than that with the rain-shortened race.

The last two, we were around an eighth place car which is where we finished. Hopefully this weekend we can figure out how to be better. Obviously we want to contend for top-five’s every single weekend and I think we can do that. The last race I ran here, last season, we ran top-five the majority of the day and got too loose at the end.

Today it is going to be all about making the right race adjustments as the track changes and being able to fire off quicker on restarts. I feel like that is where we struggled a little last year. Over the long run we were pretty good. I think Chad Norris and I have a pretty good plan for this weekend.”

WHAT IS IT GOING TO TAKE TO END THIS GIBBS DOMINATION HERE? “We are going to have to get faster cars than them I guess. They have been really fast and having the drivers that they do, running every single weekend, with Matt Kenseth, Kyle Busch, Elliott Sadler, they are able to bounce a lot of things off of each other. Normally Kyle doesn’t need anyone to bounce it off of, he has just been fast on his own. We need to get our teammates up to speed a little and our car up to speed where we can try three different things in a weekend and figure out which package is going to be best and what direction we need to go.

Hopefully we are going to be able to do that. We are trying to identify areas where our Nationwide and Cup cars are weak right now. At the end of the day, speed fixes a lot of that. It is a lot easier on the driver when you unload and the car is fast. Way easier on the crew chief. We just have to get a better base package when we show up at the track and be able to adjust balance. I think the last three weeks we have had our balance close at the end of the race, we just didn’t have the initial short run speed to be able to beat those guys.”

IS IT FRUSTRATING THAT YOU AREN’T CATCHING THEM? “It is frustrating when you lose to anybody. Whether it is a Cup driver or Nationwide driver, we want to be the best. I love racing against those guys and they are setting the bar high. We have to go after them. We aren’t sitting on our heels just hoping that something magically appears for something to make us faster some day. We are working hard every day and I think Chad and I will get better with communication. I think that is a bonus for me this season, how good we already are communicating. We just need to unload a little closer at these racetracks to beat those guys.”

CAN YOU COMMENT ON THE RIDE HEIGHT STUFF IN CUP, AND HOW IT MAY BE AFFECTING THINGS? “Yeah, the Cup cars are a handful this year. I am always the kind of driver that wants a quicker steering box. I love go-cart racing style where it feels like the car doesn’t move much and you barely turn the wheel. At Vegas I wanted to ask for a slower steering box. The cars are such a handful. I am really glad that AdvoCare is my sponsor because I needed that post workout recovery after that race. It just seems like every little movement is so quick. I was following Jeff Burton and he said the same thing after the race.

He would turn into the corner, hit a little bump and the car would just take off. That is the biggest thing. The cars don’t have that roll over feel that the Nationwide cars have. That slow motion kind of just lazy loose or lazy tight. Everything is multiplied by 10 on the speed scale and you really have to keep up with it. As fast as the cars are through the corner now, it is more important to have your balance right. If you lift just a little bit it is a couple tenths a lap whereas before it might be a half a tenth. Everything is magnified.”

BEING UP THERE IN POINTS TO START THE SEASON, IS THAT INDICATIVE OF HOW THINGS ARE GOING WITH YOUR NEW CREW CHIEF? “Yeah, Chad has been great for me. I think overall as a team it is just nice. There is a lot of consistency with AdvoCare being on the car every weekend and having Chad there every weekend and just being able to work with those guys. Plus we worked together in 2011 and that has helped us fire of quicker than some guys that are new with their crews. Chad is pretty calm. Having Jason Hedlesky in the spotters stand has been great for me. He makes great decisions for me sometimes when I want to race a little bit harder than I need to early in the race.

He will back me up a little and when I need to go after somebody he is great about giving me information. If the guy in front of me is struggling loose or tight or running the top or bottom, I know if I catch somebody I can make that pass a little quicker rather than ride behind them for five laps. It is really the whole program, all the way down to preparation of the cars. We haven’t had anything fall off the car or break this year.

When you can eliminate those kind of mistakes and be consistent, I think that is what pays off in the long run for a championship. Like I said before, we are definitely not satisfied with eighth place finishes and want to contend for wins. With that comes more risk and trying new things and pushing cars to the limit as a driver. We are willing to take those risks if we can be in the battle for wins.”

CAN YOU TIE IN THE FEEL OF THE CAR WITH THIS RACE TRACK THIS WEEKEND? “This race track may help that feel a little bit. It is a little bit more of a sweeping corner. The straightaway’s are very rough but through the corners isn’t as bad. Where it will get rough is if you try to run the bottom and have to cross four or five seams to get to the wall off turn two. As you cross those seams and the cars are slipping and sliding, before you could lean the car on the right rear and just slide up the race track.

Now every seam will be out of control for those guys. I wish I was racing the Cup race this weekend because I love that style of racing. In the Nationwide cars we are still going to have those issues. As you cross seams, you are going to lose handling. That is why the line moves up as the race goes on and you see guys running the top.

That is pretty much to avoid those seams and get better forward drive on exit of the corner. I like that you can move around here, it makes the racing more fun. At Bristol and Homestead and tracks with multiple grooves it makes the racing better. I am glad it isn’t a one groove race track at this point. As the race goes on everybody migrates to the top to avoid that snappy loose and sliding and all the things that the cars do here.