The Roush Fenway Racing driver put his No. 6 Ford on the pole, while Travis Pastrana qualifies 4th for the season opener.

DAYTONA BEACH – Roush Fenway’s Trevor Bayne started his campaign for the 2013 NASCAR Nationwide Series Championship in fine form, turning a lap 50.801 (177.162 mph) in his No. 6 Cargill Ford to win the pole for Saturday’s NNS kickoff race at Daytona International Speedway. His RFR teammate Travis Pastrana posted the fourth-fastest time in the session at 50.952. 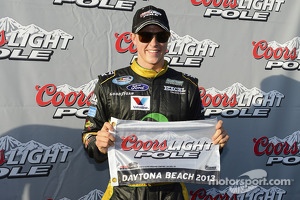 “I’m starting to like this stage up here pretty good,” said Bayne, who won the 2011 Daytona 500. “It normally means something good happens, but I’m excited about our pole run.

“This whole team, I’ve been talking them up all off-season, but that’s because they deserve it,” added Bayne. “This group of guys, they’ve won two championships in a row and that’s for a reason. Ricky Stenhouse did them a ton of justice and he’s done a great job in that car, but I’m excited to be the guy driving it this year and we’ve started off with a bang here with the pole. It’s not a win yet, but it’s a good start, so we’ll be happy to see that flag flying up on top of the truck here the rest of the season.”

Pastrana was solid in his Daytona qualifying debut topping out at 176.637 mph. The action sports legend will look to ‘kickstart’ his 2013 effort with a solid showing in the series opener. 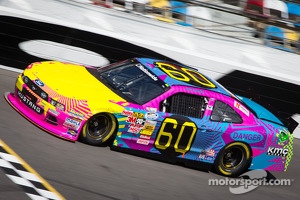 “As easy as that sounds and as high as our expectations were and how good the car and crew are it was still a big thing (to qualify fourth),” said Pastrana. “Chad (Norris), my crew chief, said that we were going to do mock runs, qualifying runs in practice because we had to make the show. He said the only thing that matters is to make the show. If we could make it without crashing it is a good day at Daytona. Otherwise a pole would be nice and winning would be nice but we have to take what we can get for now and just get these points up.”