MOORESVILLE, N.C. - Turner Scott Motorsports announced today that the team has named Scott Zipadelli as crew chief for the No. 31 BRANDT Chevrolet in the NASCAR Nationwide Series (NNS). Zipadelli, a NNS veteran, has served as crew chief for 190 events in the series, earning one win, 12 top-five and 47 top-10 finishes. The East Haddam, Conn. native earned his first career win in 2010 with Boris Said at Circuit Gilles Villeneuve in Montreal. 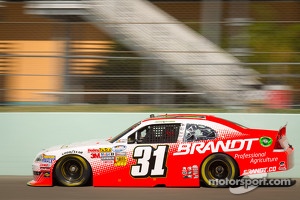 Turner Scott Motorsports revealed earlier this week that Justin Allgaier will once again be behind the wheel of the No. 31 with BRANDT, a leading agriculture retailer and manufacturer of agricultural specialty products, returning to sponsor the NNS entry for at least 26 of 33 races of the 2013 campaign.

"I'm very excited about the opportunity to join Turner Scott Motorsports, especially having teammates to collaborate with," said Zipadelli. "I'm definitely looking forward to working with Justin [Allgaier]. I've paid a lot of attention to his progress and skill level over the years. I think he's very talented and that our personalities will complement each other well. I'm also really excited to work with [co-owners] Steve Turner and Harry Scott. My goal is to make this team as competitive as possible, to give Justin the chance to win races and put the No. 31 team in a position to run for a championship. That's our goal."

"I'm very confident in our decision to bring Scott [Zipadelli] on board as Justin's crew chief. He's a very talented guy with a lot of experience in the Nationwide Series, so I think he's going to bring a lot of knowhow to this program. Our Nationwide program just keeps getting better, and we have high expectations for this coming season. We have everything we need to win races and get Justin onto that championship stage in 2013, and Scott 's going to be the guy to lead us there."

Jeb Burton's NASCAR career has been 'a tough road'

NASCAR: Toyota - Next Gen is 'biggest change' in 50 years